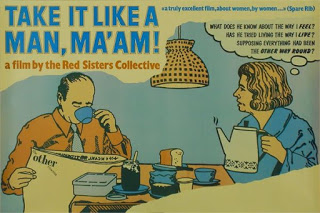 ‘Take It Like a Man, Ma’am’ (seen at the ICA), was produced by a Danish feminist film collective. It starkly reveals some of the contradictions in the feminist viewpoint. It stars Tove Maes, who plays Ellen—a middle-aged, relatively rich woman whose children have left home and who, left to her own devices, begins to experience the ‘anomie’ of the lonely, idle housewife. Her main activity is anticipating her husband’s homecoming. The focal point of her life is somewhere on the periphery of his; her main function in life is to look after him.

After a party where she is ignored and belittled by her husband’s friends, she visits a doctor. He blames the menopause, and suggests to her husband that he buy her a puppy. (‘It often works’.) Her own solution is to join the labour market, and, as a result, becomes a “new woman.”

The irony that actualising our ability to sell our labour power should be seen as a solution to any problem is the tip of the iceberg. Throughout the film, this irony is overlaid with another: a glossing over of the difference between sex and class. It is implied, in a mildly amusing sex role reversal fantasy of Ellen’s that the ruling class is all and only male. The feminist view that men as such oppress women as such is combined with the view that it is the ruling class, because of its position under capitalism, which exploits the working class. In Ellen’s fantasy, the men not only look after the children, while the women go out to work, but the men are secretaries and take orders from women bosses. The male secretaries ride bicycles and carry heavy bags, while the women drive in Rolls Royces. Now maybe it is true that most bosses are male and most secretaries female, but it is certainly not the case, as this sequence implies, that all females are members of the working class. The crowning point comes when Ellen—now herself— visits a market and strolls casually around in her finery. The hard-working stallholders are female. She remarks to one of them: ‘We are all sisters, now.’

The film comes across as uncertainly reflecting the feminist viewpoint on society. But it also appears to recognise—and here is the origin of its unease—that there is a class division in society as well. Unfortunately the latter is not explicitly seen as a major cause of society’s problems—those of women as well as men. So the film presents the class division in society as coinciding with the division between the sexes. It is implied that the ruling class is exclusively male, while the working class is exclusively female.

This, of course is not just false; it is also highly misleading. Some women are capitalist—the Queen, and most men are members of the working class. To suggest that things are otherwise—that it is men who are the oppressors is to lead people up the garden path. Women will be concentrating their energies upon kicking their husbands when they should be focussing upon the real causes of oppression under capitalism: the class system.

And to suggest—as the film does when it recognises the existence of the class system—that the solution to the problems of women housewives lies in their becoming women factory workers is like suggesting that the way to get rid of wars is to join those who are in the front line. Though the latter might lead people to believe that wars ought to be abolished, it won’t get rid of them. Anyway the premises are false. Women housewives are not outside the class system and only joining it when they begin working in a factory; they are part and parcel of it.

If they spend their lives imagining they are outside it, they are like prisoners who are under the illusion that they are free, and who like the idea of going to prison to see what it is like, in order to convince themselves that it is a good idea to abolish the prison system. Instead of adopting any of these illusory, roundabout courses, women housewives ought simply to recognise that they are part of the class system, and begin doing something to get rid of it.