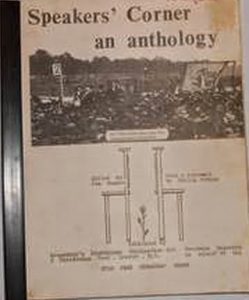 The most remarkable thing about Hyde Park is that meetings and speakers still proliferate there. Up to the traffic and television explosions of the early nineteen-fifties, crowds went to parks and listened every Sunday. Finsbury Park, Victoria Park, Clapham Common, Platt Fields in Manchester and numerous others where audiences can no longer be found; but Hyde Park, despite surgery fifteen years ago, carries on. Tourists flock there, Londoners go – largely because, as is not the case with most of the so-called “means of communication”, communication actually takes place.

The speakers today are alleged to be not so good as in the past, and it is probably true. Proficiency at outdoor speaking requires much practice, and that is harder to get than it was twenty-five years ago and more. Yet opportunities are arising afresh now, with the creation of shopping precincts and traffic-free areas in cities. The next decade may see a new generation of speakers to rival some of those mentioned in this book.

It is a collection of pieces about Hyde Park. Items from the history of assemblies there; the park regulations; extracts from writings by Bonar Thompson, a professional speaker who entertained audiences for many years; piousness by Lord Soper; and an article from the 70th anniversary of the SOCIALIST STANDARD. The compiler, Jim Huggon, is an anarchist speaker in Hyde Park and the foreword is by one of his predecessors, Philip Sansom. It is not the former’s fault that the latter is an essay in dreadful self-esteem.

For habitués of the park this is an interesting wide-ranging book which does not attempt to analyze but communicates the feeling of the place.