Book Review: The Right to be Lazy 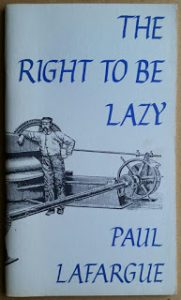 reprinted. It appears at a time when “the Right to Work” is being demanded again. This was the slogan, put in currency in 1848 and persistent ever after, that Lafargue satirized. He urged the workers to raise their sights and demand something better: the right to take life easy.
The essay is part humane vision, part anger. Economists, philosophers, politicians and priests united in preaching the capitalist doctrine of “work, work, night and day”. Lafargue quotes them — and lashes the working class for acquiescing and making work its be-all. He describes the consequences the workers have brought on themselves.

Because, lending ear to the fallacious words of the economists, the proletarians have given themselves up body and soul to the vice of work, they precipitate the whole of society into these industrial crises of over-production which convulse the social organism. Then because there is a plethora of merchandise and a dearth of purchasers, the shops are closed and hunger scourges the working people with its whip of a thousand lashes . . . With pale faces, emaciated bodies, pitiful speeches they assail the manufacturers: ‘Good M. Chagot, sweet M. Schneider, give us work, it is not hunger, but the passion for work which torments us’.

The first version of The Right to be Lazy appeared in Guesde’s paper L’Egalité in 1880. In 1883 Lafargue, with Guesde and Dormoy, was sent to prison for six months for advocating social seizure of industries; and in prison he re-wrote it. It is not explicitly a plea for Socialism, though in the conclusion Lafargue says: “A citizen who gives his labour for money degrades himself to the rank of slaves.” He urged that the machine was “the saviour of humanity” and “the god who shall give him leisure and liberty”.
It is important to realize this view of Lafargue’s. Some commentators, uneasy at a possible gift to opponents of Socialism in the word “lazy”, have claimed that the title in its original French meant “the right to leisure”. This is not so: the title is “Le Droit à la Paresse” — idleness — and when Lafargue means “leisure” he uses the word “loisirs”. His argument was essentially the same as Wilde’s in The Soul of Man Under Socialism, that machinery could and should do all the work. He says in The Right to be Lazy (somewhat optimistically):

Ploughing, so painful and so crippling to the labourer in our glorious France, is in the American West an agreeable open-air pastime, which he practises in a sitting posture, smoking his pipe nonchalantly.

He believed that conditions would improve for the working class if they did not, by their willingness to toil, make the human machine the cheapest one: “O, idiots, it is because you work too much that the industrial equipment develops slowly.” His assumptions about “labour-saving” under capitalism were mistaken, but that does not diminish the strength of his appeal for man to live more fully. The Right to be Lazy remains a lively attack on the mentality of capitalism, and a pointer to a future of fun and freedom.
This new edition is rather utilitarian in its production, but that is a sign of the publishing times. It has a useful historical introduction by Fred Thompson, giving an account of Lafargue’s life and the political background in nineteenth-century France. The introduction has also some interesting material about leisure in history and in the present-day world. The English price of the pamphlet (82 pages in all) is not yet known.
Robert Barltrop