For All Time and All Men, by A. Uroyeva. Progress Publishers, Moscow. 13s. 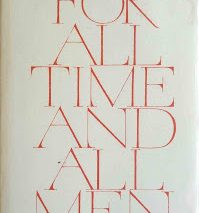 The somewhat limited scope of this book is explained by the author in the Introduction :

This book recapitulates the history of publication, translation and spread of Volume I of Capital from the day it was published September 14 1867, to 1895, the year Frederick Engels died . . . This is the first attempt in Marxist historiography to deal with these matters in their inter-relation, and being a general review, it does not claim to be an exhaustive study of the subject.

In four chapters it deals with the publication of translations in Russian (the first of the translations), in Polish, in French and in English, giving notes on all the people who helped to launch the translations. the difficulties they had to contend with and the numerous unauthorised and spurious editions. It has many illustrations of Marx, Engels and others and the title pages of first editions.

Information on the various editions in the four languages (also Danish, Italian, Spanish and Dutch) and of editions of Volumes II and III is given in a supplement and in a table. Another supplement deals with some of the differences between the authorised French edition of Vol 1 and the 4th German edition.

Chapter I deals with the original German edition and its reception in Germany.

The lateness of the English edition is explained on the usual Leninist theory that the English workers had become reformist because, “as the incomes of the capitalists increased they share part of their profits with the workers’ aristocracy”. How superficial Lenin’s assessment of the situation was is shown by his claim, “that the victory of Marxism in the working-class movement had in the main been completed by the 1890’s.”

Here he was referring not specifically to England but to countries generally. Admittedly there were, in many countries, organisations acknowledging Marx but their subsequent history showed how few of the workers really understood and accepted Marxism.

The author notes how much more rapidly English editions sold in America than in England: due partly to an enterprising publisher of a pirated American edition who advertised it as a book showing “how to accumulate capital.”

While the author deals with spurious editions of Capital she does not deal with spurious uses made of it by the Communist parties: as for example her own claim in her concluding chapter that “Socialism . . . has become a reality on a considerable part of the globe”.