Book Review: Plenty for Everybody 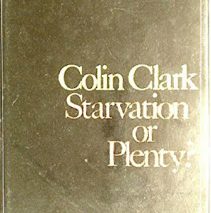 Starvation or Plenty? by Colin Clark. Seeker & Warburg. 30s.
Colin Clark, the agricultural economist, is a controversial figure. He has been a fierce critic of the Food and Agriculture Organisation (FAO) and what he regards as its exaggerations of the number of hungry and starving people in the world. He has always denied that overpopulation is, or is ever likely to be, a problem and has insisted that the world is quite capable of providing for many times its present population.
Clark has never disguised the fact that he is a Catholic and his critics have suggested that his aim is to justify his church’s opposition to birth control. It could be argued, on the other hand, that the Catholic dogma of “God will provide” brings a different approach to this question of food and population than the conventional capitalist dogma of solving the problem of plenty (in this case, plenty of people who could produce more food) by trying to abolish or prevent it (in this case, by birth control). We will merely record here Clark’s views and let people judge for themselves.
But first let us state our own view. We too say that population is not a problem and that Malthus was talking nonsense. The problem is rather the underproduction and waste that is built-in to capitalism through its profit motive (Clark, as a defender of free-enterprise capitalism, would disagree with us here). Only when the world’s resources are owned in common by all mankind can they be used rationally to provide abundance for all.
Clark estimates that the average consumption of people in North America and Western Europe is about 8 times the bare human subsistence level. How much land, he asks, would be needed to allow one person to live at the American level if the best agricultural techniques were applied? Only 2763 square metres or about two-thirds of an acre. Is there enough land in the world to allow the present world’s population to live at this level?
The potential agricultural area of the world . . . could provide for the consumption. at these very high standards, of 35.1 billion people, or over 10 times the world’s present population. This, it will be remembered, is on the assumption of the general use of agricultural methods already practised by the average farmer in the Netherlands or similar countries, without allowing for any further improvements in agricultural technology, for any provision of food from the sea, or for any extension of present systems of irrigation.
This. remember, is only a measure of what the world could provide if the most productive modern techniques were applied everywhere. To do this would take time and demand a massive technical and educational programme (of a kind only a rationally-organised socialist world could mount). But it does show that nobody need now starve and that overpopulation is just a myth.
And what about in the meantime? Even under capitalism (and Clark never steps outside the framework of this system), “for most of the world agricultural production is advancing substantially faster than population, and is likely to continue to do so”. He foresees that if this goes on and if agricultural productivity in the developing countries exceeds the demand there “there will be a most acute problem of disposal of agricultural surpluses in the export markets”. Clark blames the developed countries for hogging the world market in agricultural products and suggests they should give up part of this to the developing countries who could thus get the money to buy industrial products from them instead. Such a rational (from a capitalist point of view) re-arrangement of the anarchic world market is, we would suggest, most unlikely so that, if Clark is right here, capitalism will again expose on a more widespread scale than now its absurdity by producing food it cannot sell even though sonic people need it.
This short, easy-to-read book presents Clark’s views in handy form and should be read by all those interested in this question. It should challenge the prejudices of those who believe in the threat of overpopulation.
Adam Buick