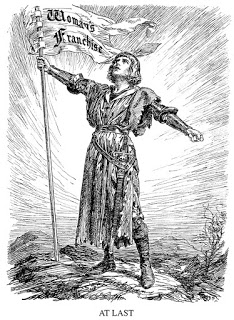 In January 1918 Punch signalled the end of the struggle for female suffrage, which had provided it with so much material, with one last cartoon. There was a woman, looking like Joan of Arc, holding a banner with the words “Women’s Franchise”. The caption read simply “At Last”.
In February that year an amendment to the Representation of the People Act gave the parliamentary vote to those women over thirty who held a £5 occupation qualification, or were householders, the wives of householders, or graduates. That was the beginning; in 1928 the Baldwin government, despite one or two diehards still resisting from the last ditches, conceded the vote to everyone over the age of twenty-one, man and woman.
The campaign for the vote was part of a great surge of female discontent which had gathered its force at the end of the nineteenth century. At that time, the full effects of industrialisation were being felt; the old type of home life had been undermined and women had been forced onto the labour market in competition with men. Wherever they could —in the craft unions and, for the better off in the so-called professions—the men organised to resist this competition.
For most women, the one hope of escape from the labour market was by marriage which, since it involved the exchange of conjugal rights for some sort of livelihood, was sometimes stigmatised as legal prostitution. Marriage, in any case, had its problems; the old melodramas about wife beating were based on more than the authors’ imagination.
Yet even marriage was a mathematical impossibility for many. In 1851, for every 1,000 males in Britain there were 1042 females. This surplus went on increasing until in 1911 there were 1068 females for every 1,000 males. The 1851 Census found that, with 24½ the average age for a girl to marry, 42 per cent of females between the ages of twenty and forty were spinsters. [1]
The unmarried woman found few opportunities for a job outside certain fields. Many became domestic skivvies; others “submitted to the sweatshops in the rag trade or went onto the streets. For the more genteel there was always the dreary treadmill of the governess, of which the 1851 Census recorded 21,000. These unhappy women got their living trying to teach rudimentary mathematics and languages at a cut price to the children of clergymen and stockbrokers, ever fearful of being dismissed, always fighting to preserve their faded respectability to carry on to their next “position”.
Even when, after the turn of the century, women had broken into industry in a big way, their conditions still compared badly with those of men. In 1911, for example, they could work at making army and police uniforms for ten and a half hours a day for a wage of a shilling a day. For four and a half hours’ work basting police trousers they were paid 3¾d. [2] This sort of wage was useless for a woman who had to keep herself.
The reaction to this came when women began to organise into trade unions, and even to form their own union — the Women’s Protective and Provident League. Among the well- to-do it came also in the rise of the “new women”, who demanded that society catch up with the changes which industry had forced upon it and recognise that women could do most jobs as well as men. They were rich enough to argue that their place was not in the home. They wanted the vote as a means of settling their grievances.
When these demands became crystallised into the cry Votes for Women the result was one of the most impressive examples of militancy, beside which Tariq Ali is dwarfed. The most original and determined of the demonstrators were the Suffragettes.*
Few organisations have rivalled the Suffragettes in their techniques of publicity and fund-raising. Without votes and candidates, they could dominate a by-election. They jammed the streets and parks with mammoth rallies. They called up Army reserves with bogus telephone calls, burnt down Lloyd George’s new home at Walton Heath, flooded the organ at the Albert Hall and, in one hectic night in 1914, destroyed three Scottish castles.
The Suffragettes had to endure a great deal of ribaldry, and worse. At one demonstration Churchill, who was then Home Secretary, told the police to deny the women their object of being arrested but to do anything else they liked with them—an order which was faithfully obeyed. The Suffragettes’ answer to arrest was the hunger strike, to which the authorities’ reply was forcible feeding, which was as barbarous and revolting as it sounds. Their ordeals made the Suffragettes’ unity all the stronger, but they did not raise unvarying sympathy; the Socialist Standard for June 1911 made this comment on the rich hunger strikers;

Starvation, to them, has all the charms of novelty, Self-indulged, it buys a martyr’s crown, clears the blood, and whiles away the prison hours.

It is true that many of the Suffragettes were rich, and many of them aristocrats, and that they aimed at perpetuating the voting privileges which went with poverty. Many of them were moved by the same indignation as a Miss Bancroft of St. Anne’s Manor, who found that the 1868 election allowed three of her male employees to vote but denied it to her. Their organisation was not democratic; it was, in fact, Mrs. Pankhurst’s private dictatorship in which anyone who fell foul of her—like the Pethwick Lawrences—were disposed of.
Indeed, the very tactics of the Suffragettes prevented them being democratic. A lot of what they did was criminal— and crimes cannot be decided upon democratically, after a free discussion and vote. The majority of WSPU members could not know, or influence, what was going on; they had to take the orders laid down by the secret meetings or sent over from Christabel Pankhurst’s secret hideaway in Paris.
In time they developed their own notions of sex superiority. In much the same way as the Black Power movement has reacted against Negro suppression with theories of white inferiority, the Suffragettes began to say that men were an unclean menace to Woman’s purity. “Votes for women and chastity for men” became Christabel’s favourite slogan. She also wrote The Great Scourge, an exaggerated and alarmist account of the extent and effects of venereal disease among men and alleged that “only an insignificant minority—twenty- five per cent at most—of men escaped infection from V.D.” [3]
Just as the Suffragettes were hotting up, the First World War, which might have been their big opportunity, finished them. With hardly a backward glance, they gave their talents to the recruiting drive and the scorn which Mrs. Pankhurst had previously reserved for devious politicians was turned upon the men who refused to fight at the call of the government which had so recently tortured her followers:

Could any woman face the possibility of the affairs of the country being settled by Conscientious Objectors, passive resisters and shirkers? (Queen’s Hall, London, 1/10/1914.)

The popular notion is that it was as a reward for their war work that the women got the vote in 1918. In fact, the vote was not given to the very age and income group which had supplied the muscle power of that effort. More likely, the government simply gave in, knowing that to hold out any longer would have brought a resumption of the whole sorry business.
Since then, one of the central questions of the Votes for Women campaign has been answered. Women have voted, we have had women M.P.s, Cabinet Ministers—we might soon even have a woman for Premier. But the poverty and injustice on which the Suffragettes hung their propaganda are still with us and women have no more idea of how to abolish them than have men.
Indeed, some of the feminists have gone along with the sort of frothy nonsense which it supposed to prove that women are social and intellectually inferior. Here, for example, are a couple of comments—not untypical—on the political scene from a one time woman M.P.:

I could always tell by Mrs. Attlee’s knitting when another grandchild was on the way.
Mary Wilson (wife of (he Prime Minister) is a sweet girl. Pity to involve her in the political game. [4]

One other question is still to be settled. Women has physiological differences to man but these do not make her inferior; what has often given her a social back seat is the fact that capitalism puts a price on those differences. The employers buy labour power on the most economical terms, which for some jobs means that they must look for labour power which will stay available. These jobs — for example technical, managerial, professional — are usually better paid and are difficult for a woman to hold because her role as a child bearer must periodically take her out of the labour market.
The tendency is therefore to confine woman to the humdrum jobs like typing and simple assembly work where a high labour turnover does not matter to the employer too much. This has the effect of making the man the main wage earner in a family — in the last analysis it is from his wage that the children are brought up and the bills art paid. And the effect of this is to raise the value of a man’s labour power above a woman’s, which has the overall result of keeping his wages that much higher. This is not the verdict of a sex war; it is simply capitalism applying its own laws to human beings—and degrading and suppressing not a few of them in the process.
If women are to do something about their place in society, they must first face the fact that most of them are workers, with labour power to sell, just like the majority of men. They must realise that their vote has solved nothing, changed nothing, because—again like the majority of men—it is a vote not backed by an understanding of society. But with that understanding the vote can do more than any Suffragette ever dreamed of — it can bring “. . .  the emancipation of all mankind without distinction of race or sex.”
Ivan
* The term Suffragette is here applied to what eventually became called the Women’s Social and Political Union (WSPU). There were other organisations in the campaign—for example the National Union of Women’s Suffrage Societies — which were less militant.
[1] Women’s Suffrage and Party Politics in Britain by Constance Rover.
[2] Women On the Warpath by David Mitchell.
[3] The Suffragette Movement by Sylvia Parkhurst,
[4] Woman In Parliament by Jean Mann.