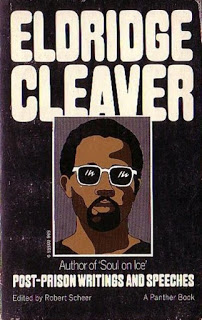 There may be those who, since the appearance of Soul On Ice, have been eagerly awaiting the next blast on the trumpet from Eldridge Cleaver. There may. Well here it is, with an introduction in the customarily ecstatic terms by Robert Scheer.—a collection of essays, speeches, articles and an interview with Playboy magazine.

The long suppression of so large a minority as the American Negro just had to call for a terrible response, one day, and the philosophies of what is called Black Power are part of that response. In the Playboy interview Cleaver muses on a ” . . . guerrilla resistance movement that will amount to a second Civil War . . .” and the book is crammed with violence, some of it defiant, some of it couched in fashionable four letter words.

Cleaver thinks that we are witnessing only the beginning of the big fight and that when the American government is finished with Vietnam it will apply itself to a war against the black people at home.

This simple, Goody-and-Baddy, concept is carried into his rages against the white politicians who want a policy of overkill in the fight against Black Power—the Reagans, the Daleys, the Alioitos. And Cleaver blasts also at those whose concern for the modern fortunes of American capitalism has led them to embrace Civil Rights—like poor old LBJ, who ended up usurping the battle cry We Shall Overcome. Cleaver thinks Johnson would never have said We Want Black Power, which shows how even a Black Panther does not plumb the depths of a politician’s cynicism.

Cleaver does not display the more obvious symptoms of racism which are evident among some black nationalists but even so this is not a constructive, nor even an analytical, book. Raking among its rubble—the fury, the romantic poetry of Che Guevera, the threatening excerpt from Mao’s little red book—it is possible to come up with some useful chunks.

There is, for example, a passage from a speech by Abraham Lincoln which highlights the racial bigotry of the man who is popularly supposed to have been the Negroes’ great friend and which shows why Lincoln is such a hero to the Ku Klux Klan. And who can argue against this:

Compare the thieves in our prisons with the big-businessmen of this country, who are in control of a system that is depriving millions of people of a decent life. These people — the men who run the government and the corporations — are much more dangerous than the guy who walks into a store with a pistol and robs somebody of a few dollars.

But if course it is possible, and easier, and cheaper, to get all of this—and more—elsewhere.