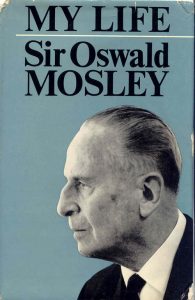 For a few years during the ’30s the Blackshirts were familiar figures on the streets of London and other big cities. In their all-black uniforms with high necked shirts and broad, heavy-buckled belts, they were a new and disturbing feature of the British political scene—the nearest, in fact, that modern Britain had ever got to a private army.

The membership of the British Union of Fascists was never all that large, but they cast a long shadow. In their early days they had the support of powerful sections of the Right, with a vast amount of newspaper coverage exceeding that of any other group.

In one respect the early ”30s resembled today, in the amount of half-baked violence that came from so-called revolutionaries. Meetings were broken up and speakers shouted down, in the name of democracy, but as in the ’60s with a footling ineptitude. The hecklers struck menacing attitudes and made bellicose noises, threatening action they had no power to carry out, in the pathetic belief that capitalism was on the point of collapse, and that the working class was behind them.

This gave the Fascists an excellent excuse for forming strong-arm squads. Fascist propagandists always claimed, when taxed with brutality, that they were only defending themselves. As a semi-military organisation, well trained and disciplined, the Blackshirts were able to make short work, both of their violent assailants and of perfectly peaceful and orderly opponents.

The founder and leader of the BUF was Sir Oswald Mosley. Flamboyant, good-looking, athletic, and a war hero. Mosley resembled the ‘ideal man.’ as portrayed in Edwardian boys’ magazines—a tradition that survived well into the ’20s and ’30s. This fact, combined with political ability and an outstanding platform manner, appealed to the type of mind that sought by quick dramatic means to cut the Gordian knot of unemployment, poverty, and disillusionment.

In this autobiography—a rather pompous but informative book—Mosley describes the twists and turns, of his political life. Born into the aristocracy at the turn of the century, he did all the expected things: went to Winchester and Sandhurst, served in the Royal Flying Corps during the first world war. was wounded and invalided out in 1916, and entered parliament in 1918 as a Tory MP. His marriage to a daughter of Lord Curzon, a former Viceroy of India and Foreign Secretary, was attended by royalty.

It was after entering parliament that Mosley began to emerge as a controversial figure. Bitterly opposing British action in Ireland, he left the Conservative party to become an independent. Later he joined the I.LP. and the Labour Party. Here he once again became controversial, embracing Keynesian theories that were unpopular at the time. He was regarded by many as the Labour Party’s great white hope. He became a member of the 1929 Labour government, [only] to resign over its handling of unemployment. This marked the end of Mosley’s career as an orthodox politician.

It was during the next decade that Mosley rose to prominence, hitting the headlines more than any other politician out of office. In the confusion that followed the collapse of the Labour government, and the crushing defeat suffered by the Labour party, new leftist organisations sprang up like mushrooms. One of these, the New Party, had Mosley as one of its founders. It was this party that slowly emerged as the British Union of Fascists.

The fascist movement in Britain reached its peak in the late ’30s Just what would have happened to fascism in Britain, had it been left alone by events, is difficult to say. But like fascist parties elsewhere it slowly became overshadowed by Nazi Germany, and the drift into war. From about 1937 on, as the line-up became clearer, the B.U.F. found itself more and more unpopular.

The great irony of the second world war was that nationalists like Mosley found themselves in opposition to the war, while the Communist Party became its most ardent supporter. The war led to the suppression of the B.U.F, and the detention without trial of Mosley and other prominent fascists. After the war Mosley was to emerge into politics again as leader of the Union Movement, but never again to be prominent

Fascism was a product of its age. Slumps and unemployment, memories of the hideous losses of the first world war, and an exaggerated fear of Russia produced the climate in which it flourished. Fascism is for all time a grim warning to workers of the perils of short-cuts to salvation.