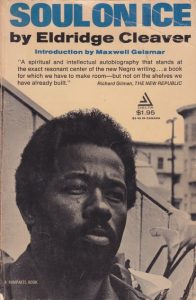 There are more ways than one of exploiting the Negroes’ downgraded social standing. A Negro, for example, can cash in on it himself by writing the sort of book that will be assured of big sales by a rapturous reception from Left-wing reviewers. Such a book need not say very much and what it does say can be confused. Provided it has a leavening of swear words, sex, and anger, the self-appointed ‘intellectuals of the Left will rush to give it their uncritical, patronising approval.

Eldridge Cleaver is the Black Panthers’ Minister of Information (their Prime Minister is Stokely Carmichael). He has been imprisoned for possession of drugs and for rape. He was a candidate in the last presidential election. With such credentials, almost any book from his was foredoomed to be hailed as a masterpiece. Thus Richard Boston, in his review in The Times, wrote of “complex arguments . . . put‘ forward with extraordinary clarity and intelligence.”

In fact, Soul on Ice is the same weary old stew of violence, sex. and four-letter words. On racism it has nothing more perceptive than a rant. Politically it is pathetic. Cleaver writes about “the rebellion of the oppressed peoples of the world” and although everyone knows who he is getting at, socialists perceive his lack of understanding that there is only one oppressed people, suffering in varying degrees. They are more simply known as the working class; they exist all over the world and their skins are of all colours. They have one interest — to get their masters, who are also of all colours, off their backs.

Now think about these two sentences:

It is almost impossible to know where to begin unravelling the confusion and naïveté of these examples of extraordinary clarity and intelligence. Does Cleaver think the ’Communist’ states are basically any different from those like America and Britain? Does he think that Communism will be a social system where one class has power and imposes laws to protect its interests? What is meant by “If the capitalists are in power”? Are they, or aren’t they?

Racism is one of the fouler fruits of workers’ ignorance and frustration. The Negroes in America have suffered terribly under it and a man like Cleaver — he was born in Little Rock — must have made a tremendous effort even to become literate. That is the achievement, if we are looking for one, of Soul on Ice. But now, as the American Negroes begin to kick back, is no time to lose our balance.

Unquestioning admiration for a black man is as bad as unreasoning hatred for him. Soul on Ice must stand or fall on its merits and not on the colour of the hand that wrote it. And it falls.