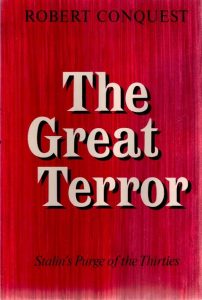 Robert Conquest is no friend of Russia and that fact alone will probably be enough for most supporters of the Russian regime to discredit his account of Stalin’s purges.

The one unfortunate fact, for the  tireless Russophiles, is that Conquest’s stuff is carefully documented, with even its trivia with testimony. And what is perhaps the most terrifying part of the book ― “casualty figures” of the purges ― computed in part from Russian government population statistics.

It is arguable, whether most of the book was needed. There is little to be  gained from yet another account of the Kirov murder, the trial of Kamenev and Zinoviev, the pitiless system of arrest, interrogation, execution or slow, living death in the labour camps. Most of it has been done, somewhere or other, before.

The casualty figures are another matter. There are of course no official details to go on; it must all be done by combining the evidence of participants ― some of them NKVD officers ― with official statistics and matching it all up with the Census of 1959. Conquest’s conclusion, which is staggering but difficult to argue against, is that, as an under-estimation, twenty million were killed ― by execution, in the “collectivisation drive”, in  the  camps ― under the Stalin state capitalist regime.

The Nazis could hardly have improved on this. And for some of the time this wholesale murder was going on, we were told that the Russians were our gallant allies, contented under the solicitous care of Uncle Joe. Henry Wallace, who was then the American Vice-President, visited one of the worst camps in 1944. The place was specially tarted up and Wallace duly found it “idyllic”.

This sort of story should make even the most obstinate Tory pause for thought. What happens to a man who fights for power over capitalism? The answer cannot be avoided and the last forty years have given evidence galore. He does the job as the system demands and on those terms everything ― murder, torture, everything ― is justified.