Putting the Boot in

‘The Politics of Harold Wilson’ by Paul Foot. (Penguin, 6s) 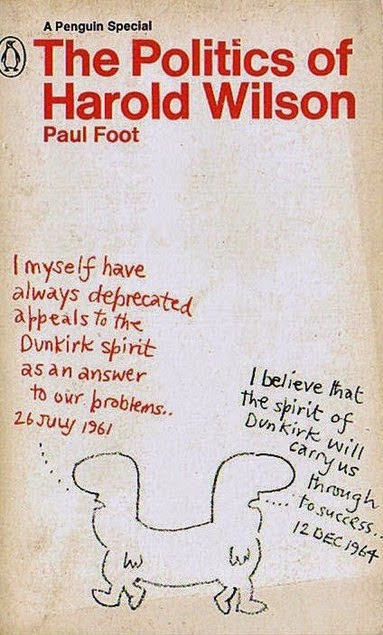 As any exponent of unarmed combat knows, the time to kick your man is when he is down. Now that Harold Wilson is on the floor, we can see many of those who once worshipped him falling over themselves to put the boot in. For these new enemies of Wilson, and for all students of Labour trickery, impotence and confusion, Paul Foot has provided after dedicated research, a lot of useful ammunition. This is a much needed antidote to the sycophantic “biographies” which we have been fed with up to now.

The Prime Minister is not the only person to get hurt in this book. For example, what about this, from Michael Foot on the front page of Tribune on 22 February 1963:

(Wilson has)  . . . a coherence of ideas, a readiness to follow unorthodox courses, a respect for democracy . . . above all a deep and genuine love of the Labour movement.

Or this, from the arch enemy of the prices and incomes policy, ASTMS general secretary Clive Jenkins after the 1963 TUC:

Of course there was no excuse for this. Neither of these men is politically blind and the facts on Wilson were available, not only from socialists. One great merit of Foot’s book is that it shows how Wilson is not, as the left wing would like to think, a good man gone wrong. From the first he was concerned only with power over British capitalism; he knew the system could be run only in the interests of the ruling class and never imagined it being any other way. No wonder the Daily Express (20 August 1949) thought that “Mr. Harold Wilson is a good man”.

Wilson’s hold over his party was based on his ability to win elections, a fact of which he has never been slow to remind them. His tactics were simple; for example, as he himself put it, he would hold up the banner of nationalisation but lead the Labour Party away from it. In this way he avoided the public rows which characterised the period of Hugh Gaitskell’s leadership while he was busily following the same policies as Gaitskell.

When he is writing of these times Foot is at his best, exposing Wilson’s support of the Vietminh:

A settlement in Asia is imperilled by the lunatic fringe in the American Senate who want a holy crusade against Communism. Not a man, not a gun must be sent from Britain to aid French imperialism in Indo-China. (Daily Telegraph, 3 May 1954.)

showing up his monotonous repetition of the same empty phrases and his Baldwin-like use of a flood of monosyllables. The later stuff, on Wilson at Number Ten, loses some of its grip and this is not wholly because we are so near to the flounderings of 1964-68.

Now Foot is forced into a constructive examination of Labour in power, to give positive reasons for their failure and to set down his answers. And here confusion reigns, of which this is typical:

What is required is not a new leadership but a new socialist politics, with roots deep down in the Labour rank and file.

No suggestion, in other words, that Labour’s failure came from the basic cause that they are a party which sets out to organise conscious socialists for a new society. Foot’s remedies, he hints, are in workers’ control and he gives, in a footnote, an approving pat on the head to the French rioters who this summer did no more than make sure De Gaulle came back into power with an increased majority.

All of this—the bitter recrimination, the lack of an alternative—are reminiscent of John Scanlon’s merciless exposure of the vanity and buffoonery of the Labour leaders in 1924 and 1929. For many of us who came into socialist politics just as the Attlee government were taking power, books like Pillar of Cloud were required reading. For anyone with any doubts left on Labour’s ability to control capitalism, or on whether it is even honest—or for anyone who simply wants to build up a library of failure—The Politics of Harold Wilson can be recommended, to take its place alongside Scanlon’s works.