Finance and Industry: What’s the Difference?

What’s the Difference?
When, on Vesting Day July 28, ninety per cent of the British steel industry became nationalised, no red flags flew over the steelworks and no traditional Labour songs were sung by cheering steelworkers. Instead the British Steel Corporation, under £16,000-a-year Tory industrial banker Lord Melchett (grandson of Sir Alfred Mond, the chemicals tycoon), came into being as a new state capitalist enterprise.
In Labour circles nationalisation has always been seen as Socialism or at least as a step towards Socialism. But Socialists have seen the matter differently: nationalisation is just a way of running capitalist industry, a form of state capitalism. Nationalisation preserves the right of the former owners to a free income from the unpaid labour of the working class. Only, instead of getting their tribute as dividends and interest on private shares and stocks they get it as interest on government bonds. The present steel nationalisation shows this well. The Iron and Steel Act provided that owners of steel shares should be compensated with government stock bearing the current rate of interest. As it turned out, what they got was a short-dated stock redeemable in 1971 with interest in the meantime at the rate of percent—on the financial pages this appears as Treasury 6½  p.c., 1971.
The Stock Exchange is an elaborate market which allows capitalists to switch their money from industry to industry in accordance with the rates of profit. Many former steel shareholders took the chance to use this mechanism: they sold their stock and used the proceeds to buy private shares again. As Marx pointed out the capitalist couldn’t care where his money is invested, in whisky or bibles, as long as he gets his profits. As a matter of fact, some shareholders may not have been too unhappy about the nationalisation as it gave them a chance to get out of steel. At present the world boom in steel is over; the market is overfull; prices are falling and unused capacity is growing. According to Lord Melchett last year that part of the steel industry that is now nationalised made a profit of only 3.7 per cent on capital employed. A capitalist could get more than this by putting his money in the Post Office or a building society! Further, the British Steel Corporation has to pay the interest on the Treasury compensation stock. This means, as the Industrial Correspondent of the Guardian pointed out on July 28, that

In financial terms the steel industry is being turned into a totally ’geared’ operation at the worst time in the trade cycle and it will have to pay out more in interest in its first few years than would have been paid out in dividends.

How to finance the nationalised industries has provided all governments, Tory and Labour, with many headaches. They have to work out ways of applying the profit standard to these industries and how to raise the capital to be invested in them. Until 1956 all the nationalised industries, save the Coal Board, could borrow directly from the capital market by issuing their own stock. The 1956 Finance Act stopped this and made them borrow from the Treasury which, of course, charged them a rate of interest. The Treasury could then go to the market itself when it judged the time favourable besides having a wide choice ranging from 90 day bills to undated bonds. From time to time the government announce that the debts of this or that nationalised industry have been “written off”. This only means that this is so for the debt they owe the Treasury and not of course the debt the Treasury owes its creditors.
So, after tracing a way through the tangle of legal and financial arrangements, the unpaid labour of the workers in the nationalised industries reaches the pockets of those who lend the government money. Nationalisation does not end the exploitation of man by man; property incomes survive though in a round-about way.
Those industries that have been nationalised do not belong to the community, as some claim. They belong, in law, to the government — but the government has debts that are greater than these assets. Thus Blackburn writes in The Incompatibles:

So nationalisation does not even help get that Labour dream of a less unequal ownership of wealth under capitalism.
To the Socialist Party nationalisation has never had any attraction, either as a means or an end. State capitalism is not in the interests of the working class and for this reason we are opposed to it. What we stand for is something different: that the means for producing and distributing wealth should belong to the community and should be democratically operated to produce for use.
The Fruits of our Labour
The September issue of the new glossy, and expensive, magazine Management Today has a Table showing the top 125 most profitable companies in Britain in 1966. For the record the top ten are: 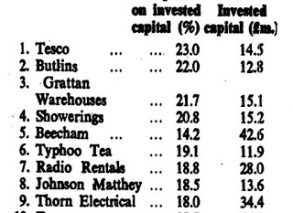