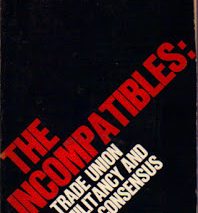 The Incompatibles: Trade Union Militancy and the Consensus Editors: R. Blackburn & A. Cockburn. Penguin Special, 6s.
This is a collection of essays written in defence of trade unions and of militant trade unionism and, as such, is valuable. Three of the essays, those by Blackburn on ‘The Unequal Society”, Coates on “Wage Slaves” and Paul Foot on “The Seaman’s Struggle”, are well worth reading. The contributions of trade union leaders, Jack Jones, the No. 3 in the TGWU and Clive Jenkins of ASSET, are, as might be expected, boring.
The Socialist Party of Great Britain has always argued that working class problems arise from the monopoly over the means of production of a privileged few. No kind of action, whether trade union or social reform, can solve these problems as long as this class monopoly remains. Trade union action, though necessary and fully supported by the Socialist Party, is limited in what it can do. It is a continuous rearguard action to maintain living standards and working conditions against the downward pressures that capitalism generates. Social reform action, that is, reformist political action, is just as limited. It tries to deal with effects while leaving the cause untouched. So that no sooner is one problem supposedly solved than another arises. Welfare measures amount to little more than a redistribution of misery. The Socialist Party, while not opposed to social reforms as such, has always opposed reformism because of the retarding effect it has on the development of Socialist understanding and organisation.
We had worked all this out before the Russian Revolution and before the rise to power of the Labour Party. Now others are having their doubts but they have the benefit of the failure of reformism.
Thus Blackburn’s opening essay, which is a mine of information on wealth and poverty in Britain, confirms our case completely. He begins:

Britain today is not a significantly more equal society than when the Labour Party was brought into existence by the unions over sixty years ago.

Nationalisation has made no difference as “all public property is hopelessly mortgaged to the private sector.” The unions have to run faster to stand still, that is, to maintain the share of wages and salaries in the national income. The welfare state, with its taxes and doles, is much the same:

The evidence suggests that redistribution within social classes is more significant than redistribution between them. Single adults,, and couples before they have children, tend to subsidize larger families and to finance state pensions for the old.

Blackburn is forced to this conclusion:

There seems to be some parallel between the effect of union activity and the effect of political representation of labour through the Labour Party. When circumstances are favourable both can obtain real advances for those they represent But in the longer term the logic of a private enterprise system erodes these gains and re-establishes the former relative position. It seems that the power of the labour movement in capitalist society is never a static quantity. This power must expand until it encroaches on the property system, or it will be subject to erosion by the unchallenged momentum of capitalist accumulation.

Perhaps, but Labour has never had, nor sought, a mandate to encroach on the property system and the working class have not been prepared to tolerate continuous Labour rule. Not surprisingly, they don’t like having their living standards cut by wage freezes.
Once the limitations of trade union and social reform action are recognised, what then? The only barrier to the establishment of the common ownership and democratic control of the means of production is the absence, in the working class, of the desire and will to make this change. Thus Socialists must face the question of how best they can help the evolution of socialist understanding. Capitalism itself is our main ally. It will, in the end, give rise to a desire to change society. This will not, of course, be an automatic process since men make history. Socialists can, by their actions, either hasten or retard this process. The policy of the Socialist Party, which we hold is the best way to hasten the process, is to organise as an independent political party whose sole objective is Socialism. The purpose of this party must not be to lead the working class but to do all it can to put across to them the idea of a new society, a classless democratic world community. Anything else, such as supporting reform parties, nationalisation, Russia, war or nationalism, only delays the process. And this is where those who contribute to this book fall down. They may know the limitations of social reform action but they don’t know the dangers in Socialists supporting it.
Ken Coates tries to defend Socialists having a reform programme. To understand Socialism, he says, requires “a high level of abstract intellectual activity” while the “lives of \the workers are in every sense practical and particular”. Or, in plain English, the workers won’t understand Socialism if it is put to them straight. In fact, of course, Socialism is a very simple idea which can easily be grasped by all. As Coates sees it, the problem is to bridge the gap between what Socialists want and what workers now want:

Between the idea of a fair day’s pay and the goal of the abolition of the wages system, it is clearly necessary to place a third demand. This, anchored in fairation, and acceptable within the logic that prevails, leads to the understanding that nothing short of a new structure, a new social order, will meet the workers’ aspiration to a fully human status.

This is the case for Trotsky’s transitional programme or for the older idea of revolutionary reforms (reforms that are supposed to develop working class political understanding). But a reform programme is a reform programme, no matter what the theory behind it We would challenge the assumption that such a programme would hasten the development of Socialist understanding. We feel that it would rather have a delaying effect. One result is that those who accept this theory, logically, find themselves in the traditional reformist party working to get their reform programme accepted. Thus, as members of the Labour Party, they become political opponents of Socialism.
Adam Buick