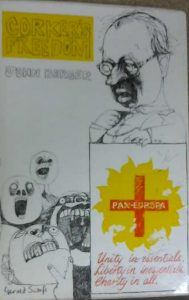 In the post-war world we have become accustomed to the oft-repeated story of working class prosperity. The term “the Affluent Society” has now become an overworked joke, but not so very long ago it was taken most seriously. Cosy articles in newspapers and magazines, and cynical adverts on the television screen, have painted a picture of workers leading lives of unparalleled richness and variety.

Even the outbursts of brutish stupidity and violence which have hit the headlines from time to time, far from destroying this image, are presented as offshoots of this same prosperity. Pleasant indeed us the lot of the fortunate worker in this charming dream world. It is therefore refreshing in the extreme to read descriptions of life as it is really lived by the vast mass of the people. Description that we know, only too well, to be true.

John Berger, who is well known as an art critic with the New Statesman, and for his excellent book of essays Permanent Red, is a writer with the ability to sum of the contemporary scene with a crisp economy of words. Berger claims to be a Marxist, although nothing very much appears in his works to justify such a claim. He is also described on the dustjacket of one of his books as a Revolutionary Moralist, whatever that may mean. There is however no doubt about his ability to put a mirror up to the world in which he lives.

His latest novel, Corker’s Freedom, describes a day on the lives of two people who run a dingy employment bureau in South London. They are the elderly proprietor—the Corker of the title—and his youthful assistant, and linked with their story are the people who come to see them.

The novel is a short one, and many of the scenes are amusing, but the overall picture is one of drabness and futility. Even the crooks are small-time and poor, like so many of the lesser criminals. The stakes for which they play seem hardly worth the trouble. But it is in its description that the book really comes to life, as in the description of Clapham seen through the eyes of a man fresh from the country.

“Outside the window it is the acres of roofs that interest him. The hundreds of chimneys, serving old fireplaces with black grates and rook for only three lumps of coal, are like stumps of trees in a forest long since cut down. He is able to see no end to it. He is in London.”

The final scene, of a speaker in Hyde Park subjected to moronic interruptions, is one which will appeal to anyone with a knowledge of Speaker’s Corner.