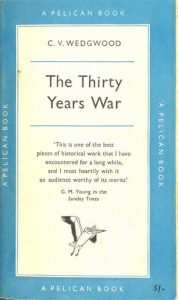 The Thirty Years War was in fact a series of conflicts lasting from 1618 to 1648, which devastated vast areas of Germany. Fought with a savagery that has seldom been equalled even in this bloody 20th century, the war has held the imagination of succeeding generations, whilst other and vaster conflicts have sometimes been forgotten.

Primarily a war between the States that comprised the disintegrating Holy Roman Empire, it was part of a greater conflict between the developing nations of Europe—and it involved most of the Continent and spilled over into the New World. Spain and France, England and Holland, Sweden and Russia, the permutations were endless, but the result was always the same—misery for the mass of the people.

Germany was then the main highway of Europe. As the author states:

“Germany was a network of roads knotted together at intersections by the great clearing-houses at Frankfort on the Main, Frankfort on the Oder, Leipzig, Nuremburg, Augsburg. West Indian sugar reached Europe from the refineries of Hamburg, Russian furs from Leipzig, salt fish from Lübeck, oriental silk and spices from Venice through Augsburg, copper, salt, iron sandstone, corn were carried down the Elbe and Oder, Spanish and English wool woven in Germany competed with Spanish and English cloth in the European market, and the wood that built the Armada was shipped from Danzig.”

The cities of Germany were more thickly spread than those in any other area of Europe. Rich, a tempting prize to neighbouring ruling classes, its semi-independent states and free cities were loosely held together in the largely unworkable Empire. In the North, along the shores of the Baltic stretched the wealthy trading cities of the Hanseatic League. Once powerful and feared by their competitors, they were in decline as the opening up of the New World swung the centre of trade to the Atlantic seaboard. Sweden, Holland and Denmark better placed geographically, fought a cut-throat battle to capture this trade.

The Holy Roman Emperor was elected to office by an Electoral College consisting of seven Princes and Cardinals, and was usually a powerful landowner with vast possessions outside the Empire. It was with private troops from these possessions that he imposed what authority he could on the states within the Empire. For over a century the Imperial office had been held by members of the Hapsburg family. Their capital at Vienna was to become the centre of the Austrian Empire which dominated Central Europe centuries later.

The Reformation had split the Empire, and an uneasy settlement in the year 1555 had given to each state the religion of its ruling house. Catholics, Lutherans and Calvinists each persecuted the dissenting elements within their borders, Surrounded by powerful and grasping neighbours, and lacking a strong central government, Germany went into an economic decline.

“Meanwhile German credit declined and dangerous speculation led to the collapse of one great banking house after another. The firm of Manlich of Augsburg failed as early as 1573, that of Haug a year later; the larger business of the Welsers collapsed in 1614 and the world-famed family of Fugger itself could not work out the storm but went into liquidation shortly after.”

To the west Spain and Holland, who had been locked in a struggle since 1572, had signed a truce that was nearing its end. Both were manoeuvring for positions from which they could renew the conflict. France was beginning to challenge the power of Spain, and across the channel a newly united Britain was on the brink of the great surge forward that was to make it the dominant capitalist power. In the south-east the Ottoman Empire was pushing on to the gates of Vienna itself. Sweden to the north, with its ultra-modern and fanatical army, looked into Germany and Russia for room to expand. This was the explosive situation in Europe when in 1618 the “key” state of Bohemia rose in revolt against the Emperor and blew the lid off the witches’ cauldron.

The Thirty Years War was first published in 1938, when Germany occupied the same position in the popular mind that Russia holds today. In some ways the book reflects the attitudes of that period. Miss Wedgwood traces, with admirable clarity, the progress of a conflict as complicated in its intrigues as it was sickening in its brutality. The war at its very beginning assumed an international character, when Spanish troops moved up to support the Imperial Forces, and a large mercenary army from Turin arrived to back up the hard-pressed Bohemians. In turn, France, Denmark and Sweden entered the struggle, and Germany became the battlefield and training ground of foreign armies—a picture so familiar to us in the 20th century.

The author tells us a lot about human suffering, which was indeed appalling. To the usual horrors of war, the murder, torture and rape of civilian populations as ruffianly mercenaries and the fanatical troops of Sweden and Spain fought over the land, was added a new horror—that of systematic pillage. Armies lived off the land for years. As one area was reduced to a desert, they moved on to new territory. No attempt was made to provision armies and the most successful general was the one who could organise pillage most effectively.

The crowning horror was the Sack of Magdeburg in 1631. This rich trading city on the Elbe fell to Tilly’s half-crazed soldiery. Its inhabitants were butchered without mercy, and fire reduced the town to a blackened ruin. Whether this was a deliberate act of terror by the Catholic authorities or the action of troops out of control has long been debated. But design or accident, the result was the same to the wretched inhabitants. The news of the outrage inflamed the Protestant world to further acts of counter-violence. Years afterwards, Imperial prisoners asking for quarter were shot down with the cry of “Magdeburg quarter.”

This is a book that can be read with profit by all who wish to increase their knowledge of the world in which Modern Europe, the Europe of capitalism arose.