Review: The Festival of Britain 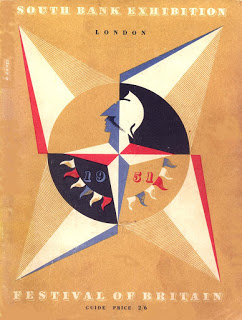 In 1947 the British Government decided to inaugurate a series of celebrations and displays to commemorate the centenary of the Great Exhibition of 1851. The various entertainments and exhibitions spread over Great Britain all through the centre months of this year are the result. The centrepiece of this festival is the exhibition now staged on the south bank of the River Thames at Waterloo, London. The guide book to The South Bank Exhibition, issued by H.M. Stationery Office, claims that this exhibition is “neither a museum of British culture nor a trade show of British wares.” It would be more true to say that it is not an ordinary museum and not apparently a trade show. Actually this exhibition is a super museum, systematically arranged in a pleasant setting. Its main attraction is that it presents, in a very interesting form, the story of man’s evolution, both biological and social. Notices informing visitors that they can obtain information about the goods exhibited, belie the statement that it is not a trade show.

In the centre of the exhibition ground is a building aptly named “The Dome of Discovery.” Here is laid out a massive collection of instruments, tools, charts, pictures, models, products, reconstructions, etc., depicting man’s discoveries, not only in the remote corners of the earth, but under the sea, in the stratosphere, in the bowels of the earth and in the many fields of scientific investigation. Embryology, physics, chemistry, biology, polar exploration, cartography, plastics, water engineering, pest control, genetics—all have their place.

Many of the displays should be of extreme interest to workers who visit the exhibition. For instance, the section of the “Dome of Discovery” labelled “The Living World.” Here are diagrams and models illustrating the work of early British naturalists such as John Ray, Robert Brown and Gilbert White who made classifications of plants and animals, mostly based on incorrect notions, but which were of immense help to their successors. The work of Charles Darwin and Alfred Wallace is illustrated and Darwin’s evolutionary theories simply and interestingly portrayed. Johann Mendel although not a Briton, is mentioned, together with his work on plant hybridisation from which have developed most of the ideas of the modern geneticists, examples of whose researches are also shown.

In other buildings under names like, “Power and Production,” “Transport,” “Minerals of the Island” and “Sea and Ships” are exhibitions of modern tools, instruments and machinery. In these, the visitor who can for a moment cease to wonder at all the marvels of man’s ingenuity, may give thought to the social consequences of this mass of modern invention. No longer does the miner need his pick nor the farmer his pitchfork. There are mechanically operated machines for almost every job. Not only a machine for each separate job, but machines that do a whole series of jobs converting raw materials to finished products. One is struck by the fact that the workers in attendance on these machines do little, if anything at all, in the productive process that is afoot. Their time and effort is devoted to caring for the machine, removing dust and waste, and tidying up around and about. There are machines for testing the accuracy of other machines and the qualities of the goods produced by them. There are machines to switch-on, drive and switch-off and the whole process of production tends to become automatic. One can realise that with the further development of the study of electronics and its application to industry, there will be less and less for the worker to do.

The architecture of some of the exhibition buildings conforms to the modern factory style. No longer the grim and solid brick built factory made to house many workers working in rows at their respective taste, now a light utilitarian structure designed as a shell to protect the delicate and costly machine from the elements.

If only all the wonders displayed at this exhibition could be put into operation for the service of mankind and not for the purpose of profit making for the owners of industry, what delightful changes could be made in the world. Not only could all people have more of the wealth that they produce but the hours spent in its production could be so much shortened. Not only could the tasks be so much easier but the conditions under which they are performed could be made enjoyable. There need be no “dirty work,” much less industrial disease, and so much more time for leisure to enjoy the arts, amusements and entertainments that are displayed throughout the length and breadth of Britain during this festival period.

A lot of these machines are not the result of recent inventions but are refinements and improvements of inventions of generations post. It cannot be that the principles applied in these machines are of such recent discovery that there has been no time to produce sufficient numbers of them to solve many of the social problems that exist today. In 1939 H.M. Stationery Office published a book by H. T. Pledge, B.A., entitled “Science Since 1500.” This book, with minor corrections was reprinted in 1947, and it shows that many of the inventions that are thought to be of recent origin are really derived from the researches of men over a hundred years ago.

One of the American New Deal publications, “Technological Trends,” states on page 53,

“Changes within the electric industry have been retarded by the buying and suppressing of patents by the large corporations which dominate the field . . . A superior electric lamp, which it is estimated will save electric light users $10,000,000 a year, has been invented but has not been put on the market.”

“The author knows of one metallurgist who made his own safety-razor blade, sharpened it, and nitrided it. It has been used daily, without re-sharpening, for 2 years. Naturally the razor-blade manufacturers are not interested”

Sir Alexander Oibb in his presidential address to the Engineering Section of the British Association in 1937, said,

” . . .  the greater the success of research the more immediate and drastic the effect on existing plant and equipment. That is where the rub sometimes lies . . . and many valuable inventions have been bought up by vested interests and suppressed. . . . ” (Report of the British Association 1937, pp. 158-159.)

Two other factors that retard development are, first, the difficulty of finding a profitable market for goods that are in plentiful supply. We quote again from “ Technological Trends ” page 58.

“Fear of overproduction with consequent shattering of price levels, and a dramatic displacement of cotton pickers, is deterring the introduction of the automatic cotton picker invented by the Rust brothers . . . .”

This automatic cotton picker can pick as much cotton in hours as a first rate hand picker can pick in weeks. The labourers required for cotton picking could be reduced by 75 per cent, if this machine was brought into use. Furthermore, the first patent for a mechanical cotton picker dates from 1850. Secondly, by depressing wages to a low level it is often cheaper to use a number of workers to do a task than to install an expensive machine that will displace them.

All this adds up to the fact that the existing system of production is now a fetter on social progress. No matter how fine a display the festival designers can create,

“. . .  so that this country and the world could pause to review British contributions to world civilisation in the arts of peace.” (South Bank Exhibition Guide, page 6)

there are still greater contributions that could be displayed were it not for the retarding effect of capitalism.

One thing we failed to find in the South Bank Exhibition was any display or even reference to the work of those Britons who have spent much of their time in research into the causes of social change. Such a display would have shown that the changes in the tools of production, so well depicted, were the cause of the changes in the social structure that is splendidly illustrated. It would also have shown that this mass of wonder-inspiring machinery and all these mechanical marvels must, in their turn, cause yet other social changes.

If the full force of the benefits of all these things displayed, is to accrue to mankind, then the capitalist mode of production must be abolished. “The Land” depicted at the exhibition with its wealth of resources together with all these labour and time saving machines must be commonly owned so that the wealth produced may be available to all. The production of goods for a market in order to make a profit must end. It is clogging the wheels of social progress, it is causing suffering and misery, poverty and unhappiness, ill-health and insecurity, all of which can end when the workers take the means of production from the existing owners and use them for the common good.

The exhibition at South Bank is not the Festival, but it is the core. There are other exhibitions, there are pageants, Eisteddfods, festivals of art and music, pleasure gardens, gatherings of the clans and other attractions throughout Great Britain. Towns and villages are having their own little “do’s” to celebrate the occasion. But all these pleasures and entertainments are subject to the system of production. The means that man employs to get the necessities of life will be reflected in his arts, his entertainments and his amusements. So the exhibitions are not only the core of the festival, they are the key to the understanding of it.