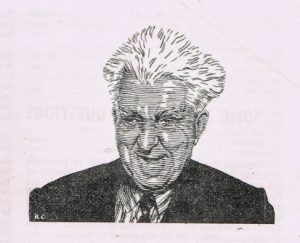 I first met Charlie Lestor over 30 years ago. I was still a kid, he was a mature and impressive man. His effect on the eager audiences of the post 1914-18 war was electric.

He had just arrived in this country after 20 years in Canada and the U.S.A. His Canadian style, accent and rig made him remarkable enough; his address to the large audiences of unemployed ex-servicemen was extraordinary. When most of the I.L.P. and Communist “Unemployed organisers” devoted their attention to personal invective against individual ministers; or the usual temporary nostrums for increase of the dole, or (much more) prevention of its decrease. Lestor never failed, in my hearing, at least, to go straight to the root of the matter.

He just could not speak to an audience without dealing with the capitalist system. From that day to this, I have never wavered in the opinion that of all the speakers I have heard, Lestor, in those days, was out on his own as a powerful exponent of Marxian economics in a popular trenchant style.

In clipped and rugged American terms, without a word wasted, he would grip a large audience from the first phrase and proceed to build up a rigorously logical exposition of surplus value.

“There’s no sentiment in Business,” “that profit is wrung out of the hides and carcases of the working-class,” “those wages amount to just enough fried fish, chips and beer to keep you working.”

These and similar phrases were as typical of Charlie Lestor as the shock of hair, the bushy eyebrows covering the twinkling eyes, and the missing index finger on the waving hand. Tanned by the prairie suns and the Yukon snows as at home in ‘Frisco or Winnipeg as in Stepney or Hyde Park, he was a modern cosmopolite, a man of all countries and all trades.

For many years I lost touch, but immediately remade his acquaintance on joining the S.P.G.B. in 1939. Much water had flown under the Bridge, the years were beginning to take their toll. In the bitter weather of 1941 it was Charles Lestor who attended regularly at the Gloucester Place office of the Party, in a Balaclava hat, sometimes with frost on his eyebrows, to give instruction and counsel to young members in between air raid warnings. Subsequently I read through the minutes of those talks which covered a wide field of History, Economics and Current Affairs.

In 1945, the post of full-time propagandist fell vacant. At an age when most men ask nothing more than their carpet-slippers Lestor applied and was appointed. As Central Organiser of the Party at the time I went over to see him in N.E. London, and made sure, as it was snowing heavily, that he had some reasonably warm equipment for the bitter trip to Glasgow that night.

The years passed rapidly by, and many were the demands of the Party on Lestor’s services. I cannot recall one occasion when these were refused or denied. Whether the meeting was large or small, far or near, early or late, he accepted as a matter of course.

As time marched on, it became apparent that even a man as vigorous, tough and energetic as Charlie Lestor could not beat Anno Domini indefinitely. Still the indomitable spirit refused to give up. In weather when he should have been indoors at home, he was regularly at Lincolns Inn and Tower Hill. The once powerful and strident tones which would ring out like a blast across a large audience, were sinking into an almost inaudible whisper.

Never did his sense of humour desert him, his remarks were now often punctuated by a quiet chuckle. He tended in later years, to an exaggerated optimism with regard to Socialist which other well-known Socialist speakers have also expressed.

During the Party’s tenure of Rugby Chambers he once remarked to me “When you’ve stopped learning, you’ve stopped living.” Surely that explains the astounding tenacity with which he stuck to his efforts as a Socialist propagandist, for so long.