Book Review: “The Papacy and Fascism”

The above is the title of a book by F. A. Ridley (published by Secker & Warburg at 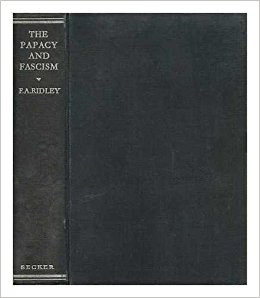 6s.), which is, as the paper wrapper correctly states, “An analysis of the role of the Papacy through history up to and including the present day.”

In spite of its small size, only 260 pages, this book is very informing and contains a good deal of useful information that is generally only to be had by much out-of-the-way reading. Mr. Ridley has adopted an excellent method which enables him to cover a vast period of time lucidly. He divides his history up into six parts, five of which represent crises the Papacy has survived, while the sixth is the crisis of the present day. The five are, respectively: (1) The fall of the Roman Empire and the migration of barbarian nations; (2) The mediaeval conflict between the Papacy and the Mohammedan world in the 11th, 12th and 13th centuries; (3) The Renaissance of free thought and secular culture under the aegis of the Arabs and Moors in the 13th century; (4) The Protestant Reformation of the 16th century; (5) The crisis of modern liberalism that dates from the French Revolution and the enlightenment that preceded it.

Large chunks of history are collected round these central points in short interesting sections.

He describes the development of the early Church from a democratic institution to one in which the last relics of constitutional government had disappeared and was replaced by an authoritarian Church with an infallible head, using as reasons for this infallibility social and not theological arguments. He also shows how the Church, through the centuries, has been moulded by social circumstances instead of moulding them. It was driven, in self defence, to shield itself behind the bulwark of infallibility: —

It has been the paradox of Papal Imperialism that it must cloak its acts under a professedly theological guise in order to defend the vast array of vested interests with which it is associated (p. 113).

On page 117 the author describes how a Church with an unchanging creed and rooted in economic conditions of bygone times secured elasticity that enabled it to meet the challenge of modern times by a fundamental change in the power to make dogma, which was transferred from the Church to the Pope in 1870: —

From this fate [collapse of the Roman Catholic Church before the intellectual and social revolutions of Europe in the present century] the Vatican decree, which transferred power to make dogmas (of course under the pretence of “revealing” it) from the dead church to the living Pope, from an unchanging to a changing authority, was designed to save the Roman Catholic Church by imparting to it the power of change in accordance with the needs of a changing epoch.

The author further points out that, while it was possible for the Papacy to adapt itself to the slow moving eras of the pre-industrial past, it is much harder for it to adapt itself to the headlong pace of modern life. If the Papacy is to survive, modern civilisation must be destroyed. The means of destruction is the various Fascist movements which, like the Normans and the Jesuits of the past, are the spearhead of the modern Catholic Church. Fascism, he points out on page 173, seeks to play the role of Caesarism in the 20th century; “the forcible stabilisation of outworn forms of society by means of a Totalitarian state, which itself culminated in a permanent dictatorship.”

The last portion of the book examines in detail the statements and actions of the leading representatives of Fascism and shows convincingly their close connection with the Catholic Church. On page 231 he makes the point, “even the Mohammedan Moors are promised entrance into the Christian Paradise if they kill enough baptised Spaniards with rifles ornamented with the insignia of the Sacred Heart of Jesus.”

It may be added that he gives convincing evidence of the debt owed by the Jesuits to Mohammedanism, and makes an effective comparison between the Jesuits and the Fascists.

There are one or two criticisms, however, that we would make, though what strikes us as weaknesses are possibly due to the limited space the author had at his disposal. In the earlier part one has a feeling that there is an undue use of authorities like Lecky, Draper, Renan, and a corresponding neglect of other valuable writers, such as Oman and Ferrero. On the whole the economic bases of different movements and events have not been given the attention one would expect.

With reference to the fall of the Roman Empire (page 34), Oman points out in his “History of the Art of War” that a considerable factor in the matter was the development of a superior military weapon by nomadic tribes—quickly moving horsemen armed with lances and bows and arrows.

On pages 47-49 the collapse of the Catholic Empire and the immorality of the Popes is described, and the author ascribes something remarkable to the institution which transcended its degraded leaders. Here again it would have been useful, however briefly, to say how this could  come about.

On page 85 it is asserted that the Roman Church would have perished in the Reformation of the 16th century but for Loyola and his company of Jesus. This seems to us unnecessary. Who can say what other means might have been devised by the Church?

There are other points of a like nature that could be mentioned. For this reason it seems to us a pity that the economic foundations of the various movements, and mainspring of the principal changes, did not receive more attention, because the impression left on the reader by some passages is that the author sees history as a spiritual rather than an economic development.

On page 144 the author quotes from one of our pamphlets and refers to it as an “anonymous pamphlet” published by us. For the information of those who might be misled by this we will explain the procedure.

When the Party decides that a pamphlet is to be published one or two people are deputed to draft it. The draft is scrutinised and sometimes cut up by a small committee, and is then submitted to the Executive Committee, who go through it word for word before passing it for publication. Consequently every pamphlet published by the Party has the backing of the Executive Committee of the time.

Finally, in spite of the few comments mentioned above, we can heartily recommend “The Papacy and Fascism” as a book well worth reading by those who want to know where both the Catholic Church and Fascism stand in relation to the future progress of the workers.