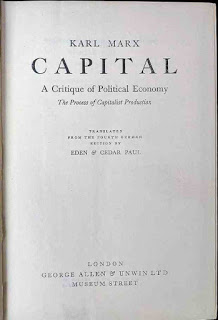 The first volume of Karl Marx’s masterly analysis of capitalist production, entitled “Capital,” was published in German in 1867. In the preface he stated that other volumes were in preparation, and outlined the portions of the subject with which each would deal. Unfortunately he did not live long enough to see these latter volumes through the press, and it was left for his life-long friend and co-worker, Frederick Engels, to construct volumes 2 and 3 out of the mass of material left by Marx, aided to a very large extent by his own great knowledge both of the subject itself and of Marx’s views and intentions.

A second edition of volume 1 appeared in German in 1873 and Marx was preparing the materials for a third edition in 1883 when he died. Engels saw this third edition through the press, with such alterations as Marx had indicated in the manuscript, in November, 1883.

It was from this edition that the first translation of volume 1 into English was made in 1886 by Mr. Samuel Moore and Dr. Aveling, under the general editorship of Engels (who took responsibility for the work as a whole) and published by Swan, Sonnenschein & Co., of London. A fourth edition in German was published by Engels in 1890. In the meantime, Engels had published Volume 2 in 1885 (a second edition in 1893), and Volume 3 appeared in 1894. From the materials left behind by Marx and Engels, Karl Kautsky has published three volumes under the title “Theories of Surplus Value.”

For some reason not easy to discover, these publishers have gone out of their way in a stupid attempt to disparage the translation supervised by Engels. On the paper cover to the book they state:—

This great work has hitherto been available only in a somewhat unliterary translation made from the third German edition, which was not the final edition.

What is “literary” or “unliterary” may be a matter of opinion, but we are quite certain that the majority of readers will hold that the present translation—as far as comparisons can be made—is no way superior, if as good as, the Sonnenschein edition. Thus the use of the ugly word “machinofacture” in place of “modern industry” will hardly seem an improvement to many. Neither is the word “febrile” in any way superior to the word “feverish” as used by Engels, while to talk of the “spiritual” wants of the workers (p.    232), where Engels says “intellectual” is in contradiction to Marx’s essential views. And it may be remarked that the Sonnenschein edition was translated from the latest German edition available at the time.

Neither is it entirely true to say that only the Sonnenschein edition has been available in English. For, if it is agreed that the American language is English, then Kerr & Co., of Chicago, published a translation of the third German edition “revised and amplified according to the fourth German edition by Ernest Untermann,” in 1906 that has been on sale here. Untermann also translated the second and third volumes of “Capital” into English. Therefore the matter, if not a word for word translation of the fourth German edition, has been available here. Following the Russian fashion of numeration, we may perhaps call it the three and a half edition!

The chief additions in the fourth edition as compared with the third are the footnote on Bimetallism (p. 126); the footnote on the Factory and Workshops Act (p. 546), four pages of text (642-645) on “Surplus Value Transformed into Capital,” and three pages of text (691-694) on “Law of Capitalist Accumulation.” The latter section is of special interest because, in addition to treating of credit, it deals with a detail of development—centralisation of capital into the hands of a few—that Marx had been accused of failing to foresee by certain Fabian critics.

While the present translation is a new one direct from the fourth German edition, it is interesting to note the translators’ statement in their preface :—

Of course Moore & Aveling’s translation, which appeared in 1886, and J.B.’s translation of the first nine chapters (Bellamy Library), have not been ignored; the former, in particular, deserved close study, as it was published under the auspices of Frederick Engels . . . .  In the present version we have relied throughout upon the definitive German text as final arbiter.

It may be mentioned that “J. B.’s” translation is a very poor one and was severely criticised by Engels when it appeared. 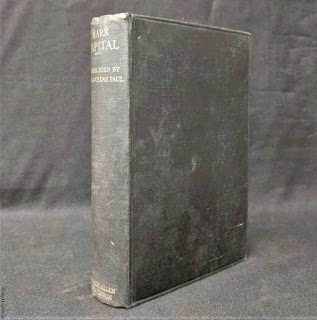 The translators are to be congratulated on one decision. “Capital” is a book intended primarily for working-class readers, the majority of whom have little or no opportunity of acquiring a knowledge of foreign languages. Marx’s work abounds in quotations from Greek, Italian, French, etc., that form stumbling-blocks to the average worker. The translators decided to give all these quotations in English without unduly burdening the volume with the original languages, a course which, in our opinion, was the right one to take.

Some printer’s errors occur that should receive attention when the next edition is being prepared. On page 15 the word “twice” is, of course, redundant. The word “being,” page 49 (sixth line from bottom) is a misprint for “bring.” In the second paragraph, page 102, the word “ diminishes ” should be replaced by “increases.” On page 391 the description of one of the mechanical powers as an “oblique” plane is incorrect, the proper term being “inclined” plane. The word “not” on page 437 is a misprint for “now.”

This new volume, with its black cover and gold lettering, has a striking appearance and is well bound and printed, but one wishes at times that the paper had been a little more opaque, as in several places the print from the other side of the sheet shows through. The price of 12s. 6d., though, unfortunately, high for a worker’s pocket, is certainly cheap for a technical work as books are priced to-day.

But the importance of its contents and the vast store of information it contains renders it a volume well worthy of some sacrifice on the part of a worker to obtain a copy.