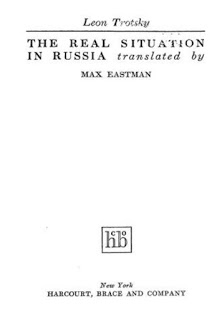 This book consists for the most part of the statement submitted by Trotsky (and 12 other minority members) to the Central Committee of the Russian Communist Party in September, 1927. The document was suppressed by Stalin and his supporters, and the opposition group – both in the Central Committee and in the country at large – was broken up by the imprisonment, persecution and exile of its prominent members. As might have been expected a copy of the statement was smuggled out of Russia, and now appears in an English edition. It is translated by Max Eastman, who is an American admirer of Trotsky, and was himself recently in Russia.

Trotsky describes in considerable detail the serious problems which face the workers in Russia under Stalin’s Government, the charges which his group level at the dominant section in the Communist Party, and the remedies which they propose.

The richer peasants in the country, and the trading and money lending capitalists in the towns are increasing in wealth and are becoming a more powerful factor politically. One-fifth of all trade, 50 per cent, of retail trade and more than 20 per cent, of industrial production is in private hands (page 27). The profits of the trading capitalists, the middle men, are big and growing while the workers’ share in the national income has been falling since 1925. The introduction of methods of rationalisation into State industry results in an increase of unemployment, a general intensification of labour, and a lowered standard of living.

The fear of unemployment is such that the workers resist the efforts of the Government to increase production in the factories by machinery and more efficient methods.

Among the 3½ million rural wage workers the rates of pay are often below the legal minimum even on the Soviet State farms. Housing for the town workers grows steadily worse.

Workers’ control is more than ever a mere catch-word without real application. “Never before have the trade unions and the working mass stood so far from the management of the Socialist industry as now” (page 57).

The immense majority of delegates to Trade Union Conferences are people entirely dissociated from actual participation in industry. Factory committees are mistrusted and discontent is driven underground because the man who voices a complaint knows that he will lose his job. Men and women are not equally paid.

Capitalism on the land

During the previous four years Trotsky alleges that from 35 per cent, to 45 per cent, of the landless rural workers and small peasants were unable to continue making a living, while the rich class of peasants (more than 28 acres) increased in number by from 150 per cent. to 200 per cent. (p. 61). In a typical district 15 per cent. of the peasants own 50 per cent. of the land machinery, cattle, etc. Renting of land is on the increase, and the army of landless rural labourers is continually being recruited from the poor peasantry.

Under Bolshevik administration there has grown up a new bureaucracy, divorced from working class life and not subject to any effective control from below. “The city Soviets have been losing in these recent years all real significance.” “The Soviets are having continually less and less to do with the decision of fundamental, political, economic, and cultural questions. They are becoming mere supplements to the executive committees and the praesidiums. . . . The discussion of problems at the full meeting of the Soviets is a mere show discussion” (pages 98 and 99). Elected delegates are promptly removed from office if they express on behalf of the workers any criticism of the official element.

The composition of the Communist Party is deteriorating. At the beginning of 1927 only one-third of the members were shop and factory workers, while two-thirds were peasants, officials, etc. In 18 months over 100,000 industrial workers were lost to membership and an equal number of peasants admitted. The majority of these were “middle” peasants, the percentage of farm labourers being insignificant.

Inside the Communist Party “the genuine election of officials is in actual practice dying out” (page 115). Terms of office are being increased to two or more years. The Party machinery is used to secure the dismissal from their employment of workers who criticise the leadership.

There are, in Trotsky’s analysis, three main groups. First, a right wing group, which combines the aims of the middle peasants with those of the Trade Union leaders and the better paid clerical and other workers. Secondly, there is the ruling section of the Communist Party, the members of the Government and the administration. Their object is to avoid if possible any change in the present balance of forces such as will disturb their own position.

And, thirdly, there is the Trotsky group, which claims to represent the mass of the industrial workers.

Quite a large part of the book is given up to the personal issues between Trotsky and the members of the Government. Each section and all of the individual disputants try desperately hard to prove not only that their views are in accord with Lenin’s general line of policy, but that during his lifetime they possessed Lenin’s personal regard. These personal issues may be of interest to the English reader, but are not of great importance. They are, however, significant in that they indicate what both Stalin’s group and Trotsky’s group think of the degree of understanding possessed by the members of the Communist Party in Russia. Whatever may be the real opinion of Stalin and Trotsky as to the value of this “Lenin worship” and controversies about personal merits (it is noteworthy that Trotsky specifically credits Stalin’s faction with “sincerity,” p. 185), they both plainly realise that in the life and death struggle which involves the political careers and the very existence of the oppositionists, they have got to canvass support by “arguments” based on abuse and on the kind of trivialities which are the stock in trade of every demagogue appealing to a politically ignorant electorate. This, more than Trotsky’s assertions, indicates the low level which rules among the so-called Communists in Russia. It is not, therefore, surprising to be told that the majority organise regular bands of “Communists” to break up opposition meetings by means of catcalls and whistling in chorus.

The reader will have noticed that the evils which afflict the Russian worker are very much the same as those which afflict us here or in any other country where the basis of the economic system is capitalism.

Trotsky presents a long list of remedies-which serve only to confirm what we have always said as to the necessity for Russia to go through capitalism. Trotsky does not admit this in so many words. In fact, he vigorously denounces Stalin’s “capitalist tendencies.” But when we examine his programme we find that it is all based implicitly on the continuance of capitalism in Russia until such time as a developed capitalist industry and a Socialist revolution outside Russia make Socialism possible.

Most of his proposals might have been lifted out of the programme of any trade-union in Germany or England; “Equal pay for equal work,” less overtime; more unemployment pay; no more Government faking of labour and industrial statistics; retail prices to be brought down to the world price level; no profiteering by capitalist middlemen; no increase in the rents of” working class houses; every effort to be made to lower the cost of production in order to promote the growth of industry ; more taxes on rich peasants; abolition of the State sale of Vodka, etc. A long programme of reforms, but no mention of the abolition of capitalist farming, capitalist trading and capitalist investment. Both Trotsky and Stalin draw up their programmes within the framework of state and private capitalism which prevails in Russia.

By far the most important demand made by Trotsky is for the unfettered expression of opinion by members of the Communist Party, and this does not go far enough. In the past Trotsky, Stalin and Lenin all agreed that “democracy” was merely a capitalist trick for hoodwinking the workers. With their dictatorship of a minority they were going to suppress the defenders of capitalism and impose Socialism on the apathetic majority. Experience has now taught Trotsky that dictatorship is incompatible with sound working class organisation.

It is also still necessary for him and other Bolsheviks to learn that they have not found a substitute for democracy. Without in anyway idealising it, the fact remains that modern industrial society, whether on a capitalist or on a Socialist basis, cannot be run with any degree of smoothness and efficiency without democratic methods. In no other way can the necessary social stability and the indispensable minimum of general interest in administration be secured.

Sooner or later the whole apparatus for suppressing opinion and political propaganda and organisation in Russia will have to be scrapped. The attempt to stifle criticism and hostile propaganda does not hasten the end of capitalism; it may for a time drive the propaganda underground, but the effect of that is to produce a false sense of security and a rapid deterioration among the organised workers themselves.

One fatal weakness of the Bolshevik leaders 10 years ago was their appalling misunderstanding of conditions outside Russia. There was at that time much excuse. Now there is none; but the ignorance remains. In face of the plain evidence of every election and the absurdly small membership of the English Communist Party, despite the waste of hundreds of thousands of pounds on propaganda, Trotsky still bases his hopes on an early revolution in this country. With 85 per cent. of the electorate members of the working class, there is no single constituency where a candidate has yet been returned to Parliament on a Socialist programme. The great majority of the workers still pin their faith to capitalism, a majority of them even continue to vote for the Liberal and Tory parties. To suppose that workers who vote for capitalism will at a signal from Moscow rise in revolt against the Government for which they vote, either in peace time or war time is sheer delusion. If Trotsky or anyone else bases a programme on that fantastic supposition they are in for certain disappointment.

Trotsky deals also with the complete failure of the Third International in China, and lays the blame on their tactic of supporting one after another of the capitalist nationalist leaders.

The book as a whole is valuable as a firsthand and authoritative impression of the recent condition of Russia, although of course we cannot accept Trotsky’s facts or his conclusions without further independent evidence, and this is not available. It is absolutely certain that the means do not exist in Russia for obtaining statistics on prices, production, etc., on a sufficiently general and precise basis to warrant the use made of them by both Trotsky and his opponents, and if Trotsky is as prone to rashness in drawing conclusions about Russian affairs as he is about England, then his views must be treated with considerable caution.

Nevertheless we can confidently assert that Stalin’s group is in the wrong. Not Trotsky’s book, but its treatment by the Russian Government proves this to be the case. Competent, self-reliant Socialists are not produced in an atmosphere of censorship, and Socialism is not to be promoted by the violent suppression of critics and criticism. Party unity which is based on the avoidance of discussion, is a fictitious unity, and a membership which is recruited by the bait of jobs in the State factories is worse than useless. Trotsky’s exile is the Russian Government’s plea of guilty to the charge of hindering the spread of Socialist knowledge and the growth of the Socialist movement. His exile does not prove Trotsky to be in the right, but it does prove his opponents to be in the wrong.