Book Review: Karl Marx and His Critics: Do Profits Grow on Thistles?

Karl Marx and His Critics: Do Profits Grow on Thistles?

‘The Economic Theory of the Leisure Class’, by N. Bukharin, (Martin Lawrence, 7/6 net.) 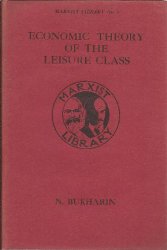 Since the days when Marx analysed the Capitalist system of producing and distributing wealth, laid bare the secret of value, and demonstrated how surplus value is obtained, the agents of the master class have been engaged in numberless attempts to “explain” why the Capitalist is entitled to his profits. A legion of Professors of Political Economy have entered the lists against Marx, with disastrous results to themselves. Journalists and publicity writers have tried their hands where the experts have failed, with even more lamentable results.

One of the most boomed of the Marxian critics, whose general work on Economics ranks, perhaps, higher in Capitalist estimation than that of any other economist of modern times, was Böhm-Bawerk, head of the “Austrian” School of Economics. He was not only a Professor of Economics, but also Austrian Minister of Finance for some time. Thus, to his theoretical knowledge lie added experience of practical affairs, and this would lead one to expect in him a most formidable opponent. Many years ago he loudly proclaimed the discovery of a “great contradiction” between the first and third volumes of “Capital,” but the “discovery’” caused hardly more than a flutter before it died.

His two best-known works are his “Theories of Interest,” where he claims to show the failure of all the attempts to explain interest by previous economists, and his “Positive Theory of Capital,” in which he sets out to state the source and reason of interest.

To reach this explanation it was necessary to state a law of value which, incidentally, would expose the hollowness of Marx’s theory on the same subject. Here, however, the famous Professor was unable to do anything better than come to England and borrow the late Stanley Jevons’s theory of “Final Utility,” published in 1871. A few minor alterations were made, and the title changed to “Marginal Utility,” and then the theory was announced as a brand-new solution of the tantalising problem of value. It is this theory of value that Bukharin criticises in the volume under review.

It is easy to see that here there is complete confusion between value and price, a confusion that runs throughout the whole of Böhm-Bawerk’s writings; whilst two other points in the theory strike the reader at a first glance. One is that we are here given our old friend, “Supply and Demand,” in a slightly different dress, as the explanation of price, for the “marginal” pair are the same couple who effect a sale under the theory of Supply and Demand. The other point is that value, according to this theory, is entirely a question of individual estimates, or, to use the technical term, it is subjectively determined.

On the first point, it is plain as a pikestaff that this “marginal” theory has no connection with the facts. As far as the vast majority of the articles produced for sale are concerned, the prices are fixed beforehand and there is no question of bargaining at all. One does not go into a modern store and start arguing what price one shall pay for an article. The price is there already “marked in plain figures” for the customer to see. Moreover, it would be absurd to suppose that the “marginal” utility or “subjective valuation” of a given article will be alike at different places at the same time. But the prices are the same. And there still remains the criticism that was used against the older theory, namely: When Supply and Demand equal each other, what then determines the price? When the prices of the “marginal” buyer and seller are equal, what determines that price? This question is not even mentioned, let alone an answer attempted, by the Austrian School.

On the second point, that value is a “subjective” question, it is evident that as each individual’s “subjective” estimate will be different from the others, we have here no actual basis of general value at all. Such an “explanation” is a good illustration of the mental bankruptcy of the apologists of the Capitalist class. But it is on the question of interest that this bankruptcy is most clearly seen, and for good reasons.

Capitalists’ profits form the danger zone of orthodox economics. It is useless to deny, however “subjectively,” that profits exist. So they must be “explained.” But how? Every apologist answers differently, until Böhm-Bawerk feels impelled to write a large volume to show that they all are wrong. Then what is his explanation? Truly wonderful.

The Capitalist has resources and can buy raw materials, machinery and other plant necessary for the production of articles for sale at some future time. The worker has only his labour-power to sell, and as he is without resources he cannot wait till that  “future time” when the articles will be sold. Moreover, in common with other people, the worker places a greater value upon a present satisfaction or utility than on a future one. The difference between the present and the future valuations is the source of the Capitalist’s interest, and the justification for that interest is found in the time the Capitalist waits before receiving it. An illustration may make this point clear. For the sake of simplicity we will only deal with the worker’s part in production, leaving on one side the question of raw material, plant, etc.

Let us assume that it takes a month from the beginning of the manufacture to the selling of a given article, and that the article sells for 20s. As the worker cannot wait for a month, he would consider the present value of a smaller sum—say 15s.—as equal to the future value (a month hence) of 20s. So the Capitalist, who is a thought-reader, advances the worker 15s. to-day for work that will produce 20s. a month after. There is, of course, no robbery, as the worker is quite ready—nay anxious—to take the 15s. to-day rather than wait a month for 20s. If the worker could wait the month, he would receive the 20s., and interest and profit would vanish!

Why does he not wait? Because he has no resources, says Böhm-Bawerk. Exactly. But why has he no resources? Here Böhm-Bawerk becomes suddenly shy and offers no explanation. The answer is simple. It is because he is forcibly prevented from obtaining any resources by the power in the hands of the Capitalist class.

It is not a question of the worker’s “subjective” valuation of either present or future utilities at all. It is the fact that the only alternative he has to accepting the Capitalist’s terms is starvation. As the worker is forcibly restrained from any access to raw materials or machinery and tools to work upon that material, he is unable to accumulate any resources and must therefore sell his services day by day. It is the difference between the value the worker produces and that value that he receives, that forms the source of surplus value. Interest and Profit are parts of this surplus value, and hence are the result of the robbery of the worker by the Capitalist.

These and several other questions, such as the “abstinence” of the Capitalist, and whether he “advances” the wages of the worker, are dealt with very fully by Bukharin in this volume. The book, however, is one for the student rather than for popular reading. German writers, as is well known, are very fond of cumbersome words and long and involved sentences. Böhm-Bawerk’s writings follow the national model, and Bukharin, apparently, enjoys using the same sort of phraseology, with the result that the book presents a somewhat fearsome appearance to the lay reader. As a technical criticism of the Austrian School, the book can be fully recommended to all who refuse to he frightened by the terminology used.