Christmas is coming—that’s the way with Christmas, its always either coming or going. The important point for the moment, however, is that about the time of the coming of Christmas it becomes the fashionable thing for people to distribute largess, in other words, to chuck the spondulix about. That truism of every-day life (dare we)—“The fool and his money’s soon parted,” is by common consent suspended far the moment, and ceases to have any significance. In fact, there seems to be more than a suspicion that respectability demands that one would run around pressing gifts on all and sundry.

Well, having got that off our chest; “Here we comerwissilin'”. You know what we mean. Its your money we want. There is that £1,000 Fund. Rapidly as it grew at first, it is not now making the progress that it should be making. It is starved and stunted, weak and and debilitated, knock-kneed, anemic, run-down and showing unmistakeable signs of the rickets. It is a damned disgrace to the revolutionary movement, and if the poor little cuss doesn’t buck up, it will be a question if we shall not have to wring its miserable neck and put it under the turf.

And yet that would be pity, for there is a real place in the world for it to fill a real need for its existence. Never before have the master class been at such pains to lead the workers astray. They are pouring out wealth like water in an active propaganda which would have been beneath the dignity of any British Government a few years ago. The reason is plain. The happenings of the last five years have shaken the sleeping masses up. What they have been called upon to undergo has shown them that they have vital interests outside their beer and their skittles and their football and their work, and the masters are jumpey.

To enable us to make the most of the situation we ask our friends to send us a Xmas donation. 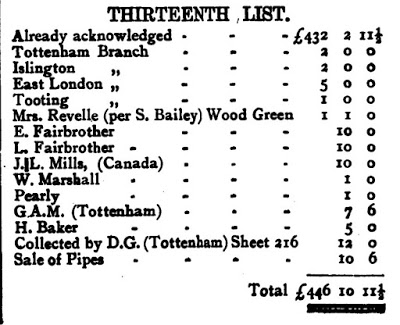