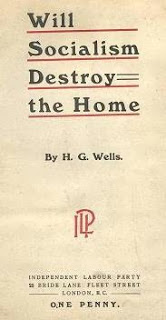 Two points are introduced in this pamphlet, with both of which we disagree. The first is the idea of remuneration under Socialism being relative to the size of the family. The second is the suggestion of municipal baby-farm for children of unworthy parents.

With regard to remuneration, all Socialists will object to the proposal “to make a payment to the parents for their children.”

Prognostics in the name of Socialism as to how the family after the revolution will be constituted, need a sound recognition of the basic principle’s of Socialism and of science generally, for even approximate accuracy. We have no evidence that Mr. Wells possesses any such recognition. Although he soundly criticises the existing system for the difference between the family as it is commonly supposed to be, and the family as it is, yet he fails to indicate the causes which have produced the difference. Those causes are economic and have been traced in the second part of Das Erfurter Program published under the title of “The Working Class,” shortly to appear as the fourth of our pamphlets, nor has the economic base of the impending change been made of sufficient clearness. Yet only by this means can an insight be had. The main factor would seem to be the complete freeing of women from economic dependence on men. This means the freeing of love from the influence of social position and the cash nexus, and a corresponding increase in the importance of the mutual consent of both parties to a marriage, whatever form that marriage takes.

The ability or worthiness of the parents need never be questioned, as the factors which to-day promote unworthiness will have gone, while the wilful neglect of children by parents able to attend to them would, under Socialism, probably indicate the necessity for the services of a mental physician! Just as the other bugbear to the non-Socialist—the won’t work will probably be a subject for similar treatment.

The brief historical sketch of the family with which Mr. Wells concludes, might easily have been made fuller, and for the purposes of the pamphlet carried a little ahead with more definiteness. For the rest it is an interesting speculation, admirably written, but it does not get far enough away from the idea of State baby farms and State boarding schools to satisfy those to whom “uniformity” and “regeneration ” are as objectionable as ever they were.