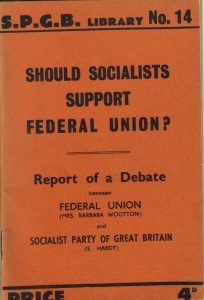 Report of a Debate Between Federal Union (Mrs. Barbara Wootton) and The Socialist Party of Great Britain (Mr. E. Hardy)

THE CHAIRMAN, in opening the proceedings, said the debate had been arranged jointly by the organisation known as Federal Union and by the Socialist Party of Great Britain. Mrs. Barbara Wootton would answer the question, “Should Socialists support Federal Union?” in the affirmative, and Mr. Hardy would answer it in the negative.

Mrs. Barbara Wootton was well known as a Socialist thinker and writer, and Mr. Hardy was also well known, as a nondescript member (as he preferred to be called) of the Socialist Party of Great Britain.

The subject of the debate was an exceedingly important one, and the question of what was to be done at the end of the war in order to organise a better world was no doubt a question that was very much in the mind of everyone present that evening.

Federal Union. I am going to make four statements about a Socialist, hoping that Mr. Hardy will endorse all of them, even if he wants to add a few others of his own.

My second proposition is that a Socialist is a person who puts equality, particularly social and economic and political equality, very high in his scale of social values. A Socialist is a person who not only thinks that ordinary people ought to have enough, but also thinks that the other people, also ordinary, ought not to have too much, and who believes that equality is of value in itself.

Thirdly, a Socialist is a person who believes that it is very unlikely that we shall get equality and very unlikely that we shall get the use of the world’s economic resources for the needs of the common man, unless there is collective ownership and collective operation of those resources. A Socialist, therefore, is a Collectivist, a person who believes in it because he thinks that common ownership is a necessary condition for equality.

My fourth proposition – and in this I want to go as far as I possibly can to meet Mr. Hardy – is that most Socialists are people who think that in the world in which we live, the English world, this kind of equality, this use of resources for the common man, is prevented by something that we would call a class system, by which I think we would both mean a system under which a minority of people, not because of merit or
superior intelligence or even superior training, but because of their possession of economic power, exercise far more than their due share of influence on the political, social and economic policies of the community. I think we would agree we could produce tangible evidence of the existence of some such class system. I am not sure we would define it in exactly the same way – I rather think we would not – but I think we would agree that a Socialist is a person who conceives that class system as something which stands between him and the objectives of equality and the use of the world’s resources for the common need, which I defined as the Socialist’s objectives.