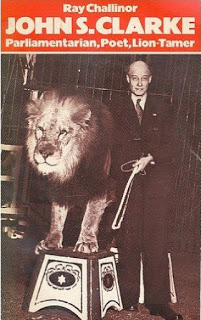 This little book, published a couple of years ago, is well worth reading containing, as it does, illuminating sidelights on the genesis of the British Communist Party and its later left-wing off-shoots.

Clarke was an extraordinary character, leading a colourful life as a lion tamer (he came of circus stock) and merchant seaman. He travelled all over the world but, although entirely self-taught, showed remarkable gifts as a writer and Scottish “rhymeater” in the Burns tradition. He gravitated to the Socialist Labour Party where his journalistic talents soon made him the actual editor of The Socialist during the First World War. With the advent of the Bolshevik seizure in Russia, Clarke was the first (with Willie Gallacher) to make the Moscow trip. Whereas Gallacher (a muddlehead if ever there was one) swallowed the Russian bait, Clarke refused to come back to England and, as editor of the Glasgow Scottish Workers Committee paper The Worker, wrote critical articles, exposed the unsuitability of Russian tactics in Britain and, above all, the lying, glowing reports sent to Lenin by the greedy job hunters of the British Socialist Party. “Information by the mass, specially preened, pruned, doctored and cooked by the officials of the old BSP was sent to Russia with the deliberate object of misleading the Bolsheviks as to the true state of affairs in Britain” he wrote.

This certainly did not suit the new Russian paymasters who, after buying up The Worker, promptly had Clarke sacked. He was the first publicly to denounce the absurdity of Lenin’s tactics of supporting the Labour Party. Challinor claims to have “subjected all Lenin’s statements about Britain to a close analysis” and to have come to Clarke’s view. “Lenin’s mistake was his belief that most British workers considered the Labour Party to be Socialist, and that this myth could only be dispelled by seeing it in office but, in fact, most British workers are aware the Labour Party is largely the mouthpiece of the Trade Union leaders, whose limitations have been known for many years. Hence Lenin’s tactic was an unnecessary exercise, telling workers what they already knew,” he writes. What a pity that Vanessa Redgrave, Paul Foot, Tony Cliff, Gerry Healey, Chris Harman and co., many of whom were still, up to a few years ago, urging workers to vote for the Labour Party, did not know what “most workers knew”. We would have been spared the rubbish of WRP, RWP, Big Flame, IMG etc., “New CP”, “Old PLC.” Chinese Leninists and so on.

Clarke was persuaded by the Glasgow ILP (Maxton and co) to run for Parliament. He was elected, sat for Maryhill for two and a half years and, to his, credit, chucked it up in disgust!

Borrow the book from the local library, like I did.