“State of Revolution” by Robert Bolt, at the Lyttelton Theatre. 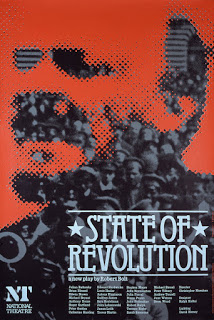 “But, Comrade Lenin”, says Anatoly Lunacharsky, “that would not be Socialism—but a blind peasant revolt!”

In those few revealing words is summated the rest of the play, and the inevitable tragedy (and death) of Vladimir Ilyitch Ulianov=“Nikolai Lenin”. This play is a masterpiece, sticking consistently to facts and dramatically portraying the heroism of the Russian people against both Czarist and Bolshevik tyranny.

“We take the peasants’ corn, and when driving his pigs away, hand him a pamphlet, Which he cannot read”, says Lenin. There is the explanation, in a nutshell. The millions of peasants were not Socialists, and would not become Socialists before they were wage-workers.

Robert Bolt, whether aware of the Socialist Standard’s estimate in 1917 of the Russian events or not, has amply confirmed what we said then: “There will be no Socialism in Russia.” His piece makes a magnificent history lesson.

For the only dramatic critic the play will have who actually heard Lenin, Trotsky and the rest in the Kremlin, the simulated Politbureau meetings without a table were somewhat comical.