At the beginning of another new year we in the Socialist Party express our solidarity with all those striving to resist the attacks and cuts from capitalism.

Working people are bearing the brunt of capitalism’s multiple crises around the world. Time is running out for the planet and there could be a risk to human civilisation itself. Capitalism divides people rather than unites them — worker from worker, men from women, blacks from whites. It teaches competition not cooperation.

The world has a capacity to bring forth riches beyond the wildest imagination of people. Instead, this prospect has been used primarily to bring death and destruction. As in Ukraine, where capitalism has set workers to fight workers, to kill, maim and destroy in order to determine which set of bandits should prevail and rule over those living there.

Our use of terms like ‘production for use’, ‘moneyless society’, ‘abolition of the wages system’ and ‘free access’ may sound like a word-salad to people. But all we are trying to do is to describe the society we are aiming to see achieved. While we can accept that for some people it may sound somewhat abstract, we would be remiss if we did not make it absolutely clear what our objective was. But the question is not what words to use to describe what is needed, but how to put it into practice.

Workers possess the potential to change the world and the ability to run it in the interests of humanity where freely-associated men and women share the means of wealth production and use them to supply the needs of all, freeing everyone from the source of their sorrows.

We wish to see a mass socialist party but we reluctantly acknowledge that our own limited attempts can’t hope to make a great impact. But the development of socialist consciousness does not depend solely on our small numbers but more generally on the conditions people live under in capitalism and the need to change those.

We do not submit to the notion that it is impossible for workers to reason for themselves about where their interests lie. How did ideas of socialism develop in the first place at a time when they were illegal and savagely suppressed?

We are socialists because we hold that socialism is the sole hope of working people. Our New Year’s commitment is to take revolutionary politics to workers everywhere and to do what we can to hasten the coming of the socialist world cooperative commonwealth. That is our New Year message to all our fellow workers. Is that so hard to understand? It is in fact the very essence of simplicity.

So, we deliver this New Year message as we have done before to say to working people that they can control their destinies once they have shed their delusions about capitalism, and cast off the burden they have carried upon their backs for so long. 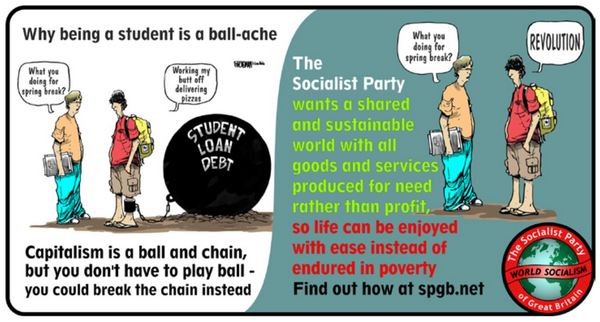 Next article: Pathfinders – More Tales from the Crypto ⮞

One Reply to “Editorial – sweep away capitalism”