I was doing some house painting the other day and called into my local ironmongers for a bottle of white spirit. I picked some up from the shelf, went to the counter to pay and was surprised to see something unexpected there – a pile of entirely non-DIY magazines with main title Brighter Times and sub-title ‘Magazine for an Alternative World’. My curiosity piqued, I picked one up and had a quick look through. It was a well-illustrated professional-looking publication with a cover charge of £1. I decided I could afford it, but when I tried to add it to the cost of the white spirit, Jane who serves in the shop told me the magazine was free. ‘Good’, I said, even if it gave me a slightly odd feeling that they should be giving it away. While it’s true that every minute of every day people do countless things for others without the intervention of money, in the buying and selling society we live in actual products usually have a price tag that must be paid. If there’s no price tag, it tends, perhaps sadly, to make you suspicious about them, to make you think that, if the product is free, it can’t be much good or that there’s some other underlying reason why it’s being given away. 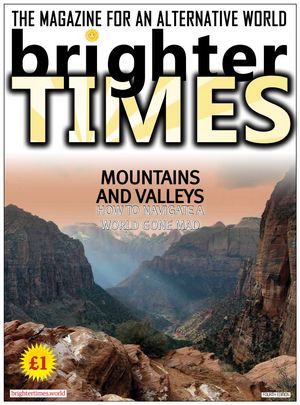 Anyway I took it home and, when I had some spare time, sat down for a read. The front cover said ‘How to navigate a world gone mad’, which had probably been one of the other things to draw me to it, since, as a socialist, I can’t but see that the world is in thrall to a kind of madness, the madness of the capitalist system. The first two or three short articles gave me a feel for where the magazine was coming from. There was an advertisement on page 2 for a book entitled The Power of Now: A Guide to Spiritual Enlightenment whose author Eckhardt Toller is described as a ‘spiritual teacher’. It told us that his teaching came about ‘as a result of a profound inner transformation at the age of 29 which radically altered his life’, prior to which ‘he had suffered severe anxiety and depression but this shift in consciousness saw his suffering dissolve away’. Then there was an editorial that, while denying adherence to ‘conspiracy theories’, expressed doubt about Covid vaccination and advised resistance to ‘the mainstream narrative’ and to ‘the darker forces that seek to dominate us’. And there was also a report of the inaugural conference of ‘the World Council for Health’, which characterised itself as an organisation of ‘Covid dissidents’ looking to a ‘future of integrative healthcare and wellbeing rooted in sovereignty, informed consent, and personal empowerment’. Other articles highlighted the apparent dangers to health of 5G technology, ‘Frankenstein foods’ produced using genetic technology, the World Economic Forum described as ‘an unaccountable corporate body which wishes to impose outright tyranny upon the world’, the ‘outdated practice of water fluoridation’ called a ‘Class 2 poison’, and the ‘controversial science’ of man-made global warming.

We can see where this is going. But it’s also only fair to say that, when I read on, I didn’t as a whole find the same kind of standard conspiracy theory publication (eg, ‘The Light’) that relentlessly and crazily pushes the button of conspiratorial global domination by a small group of ‘elite’ individuals. It did veer towards that but sugared the pill with its generally more ‘moderate’ language and ‘nice’ articles on, for instance, the need for camaraderie, soil regeneration, community-based food production, and ‘healthy love’ between couples, much of which appeared laudable even if the dog-eat-dog attitude the society we live in drives us to makes such cooperative activity difficult to carry out in any kind of overall and consistent way. The back page of the magazine was given over to what it called ‘The ABCs of Life’, which were short, ‘virtuous’ suggestions for living, beginning with each letter of the alphabet. Examples included: ‘accept differences’, ‘give freely’ ‘harm no one’, ‘open your mind’, ‘reciprocate’, ‘value truth’, zealously support a worthy cause’.

Reading this magazine, I couldn’t not ask myself what drives the people who produce it and, read and support it, and manage to get it placed in shops such as my local ironmongers? It seems to indicate on the part of those involved an attempt to give meaning to a life situation in which they feel fundamentally helpless, a ‘world gone mad’, as the front page had it. They feel trapped in a system that dictates what happens to them and those around them, and the apparently far-out theories and ‘regenerative’ activities they advocate are attempts to have some say in that situation, to reach for some kind of control over their lives and their futures. It goes without saying of course that the system that traps them is not one engineered by some shadowy group of conspirators controlling the world and manipulating events from afar, even if such an idea may seem to make things easier to grasp. Rather what the ‘brighter lives’ people are trapped by – as we are all – is the world market, an unplanned, chaotic, wasteful force that no individual or group controls.

So, yes we need ‘brighter times’, we need ‘an alternative world’, but that can only meaningfully come via majority democratic political revolution to establish a system of common ownership, democratic control and production for use. And before we can get that, we need clear understanding on the part of the majority of workers (ie, all those who have to sell their energies for a wage or salary) of how the current system works and what can be done to change it. Without this, the helplessness so many feel in the face of seemingly uncontrollable forces will continue to lead them down the same kind of blind alley as frequented by the ‘Brighter Times’ community.