‘The curtailment of the rights of local government began back in the 1990s. In 1993, liberal reformers, represented by President Boris Yeltsin, came into conflict with the system of councils that was left over from revolutionary times and given a new lease of life during Mikhail Gorbachev’s perestroika’ (Jacobin, 11 September, bit.ly/3SeQozN).

Actually the rot set in over a century ago with the forceful dissolution of the Constituent Assembly in 1917. Ironically, one supporter of this measure provided an excellent account of why the Social Revolutionary Party, representing the peasants, who were in a large majority, should be denied their victory:

‘It may certainly appear as a monstrous crime against democracy on the part of a regime which regards itself as Socialist to have suppressed an institution which had been the dream of generations, which the Bolsheviks themselves had been championing ever since the first revolution of 1905 with more enthusiasm than any other party… What better proof could have been furnished that the Bolsheviks were trampling on the people’s will in a manner hitherto exhibited by the worst tyrants in history, that they were afraid of the verdict of the nation gathered through its representatives in the highest assembly known to democracy …?” (The Bolshevik Revolution, Maxim Litvinoff, 1918, bit.ly/3LoLDkY).

For a contemporary account, see our article ‘The Revolution in Russia: Where it Fails’ (Socialist Standard, August 1918, bit.ly/3xw7IbM). With regard to Gorbachev and life in state capitalist Russia post 1917, this candid comment from journalist Vitali Vitaliev is worth repeating:

‘The main mistake of Western analysts trying to assess Gorbachev’s career is the attempt to treat him as a kind of God-sent Messiah who emerged to save Russia from ‘socialism’. Nothing can be further from reality. Throughout his political career Gorbachev was part and parcel of the apparat. He came not to dismantle ‘socialism’ but to preserve it. I am putting ‘socialism’ into inverted commas because there has never been anything of the kind in Russia. No other country is so far from the ideas of equality and fraternity as the Soviet Union. If there was a socialism, or even a Communism at all, it was only for the ruling elite who lived and are still living in a separate world. It is a world of privileges, starting from birth (special maternity homes) going on all through their lives (special shops, hospitals, hairdressers’ salons, canteens, toilets and what not) and not ending even with the end of their physical existence (special cemeteries). Yes, yes, special cemeteries for the rulers of ‘the first working-class State in the world’, where workers are not supposed to be buried’ (Observer, 11 March 1990). 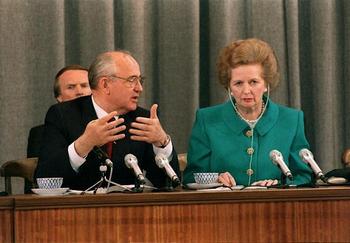 Margaret Thatcher in a meeting with Gorbachev reportedly argued at one stage about the merits of capitalism versus ‘communism’ and she told him ”’We are all capitalists. The only difference is that for you it’s the state that invests, while for us it’s private individuals.” Gorbachev was apparently flummoxed’ (Mission to Moscow, Sunday Times 5 April 1987).

She was correct. Capitalist hallmarks, such as class society, commodity production, profit motive, exploitation of wage labour, markets, etc., exist in Russia, both pre- and post-Gorbachev, as they do worldwide. The very idea of socialism in one country is akin to being a little bit pregnant! People who insist otherwise are living in a world of make believe, which is home, alas, to billions, including fans of the so-called Democratic People’s Republic of North Korea.

‘The North Korean Supreme People’s Assembly gathered for its first session on Wednesday. According to state news agency KCNA, the chamber agreed to adopt laws on landscaping and rural development. However, it also pledged to help turn the nation into a “beautiful and civilised socialist fairyland”. The two laws are intended to help advance efforts made by the governing party to bring about “a radical turn in the rural community and its policy on landscaping to achieve a rapid development of the Korean-style socialist rural community and spruce up the country into a beautiful and civilised socialist fairyland”. Kim Jong-un, who did not attend the parliamentary event, also promised to improve people’s livelihoods and boost rural development amid spiralling economic crises. Economic difficulties have been blamed on self-imposed Covid-19 lockdowns, international sanctions over the country’s nuclear weapons programme and also natural disasters’ (Daily Express, September 8, bit.ly/3DqG2c3).

The February 2012 Socialist Standard’s cover features a young-looking ‘Great Successor’ under the title ‘Kim, All Ye Faithful. Leaders in the Land Time Forgot’ and related article ‘Death of a Dictator’ (bit.ly/3QTpvR3).

‘Everything seems to tick in “Unrest” the latest effort from Zurich-born writer/director Cyril Schäublin. “Unrest” depicts the working lives of 19th century anarchist watchmakers in the Swiss mountains, laying bare the absurdities of the wage system’ (Roger Ebert, 12 September, bit.ly/3xwa2Qe). During the interview, Schäublin states: ‘Kropotkin, contra Karl Marx… believed in the abolition of any kind of wage labor whatsoever.’ Au contraire. In Value, Price and Profit (1865) Marx stated:

‘At the same time, and quite apart from the general servitude involved in the wages system, the working class ought not to exaggerate to themselves the ultimate working of these everyday struggles. They ought not to forget that they are fighting with effects, but not with the causes of those effects; that they are retarding the downward movement, but not changing its direction; that they are applying palliatives, not curing the malady. They ought, therefore, not to be exclusively absorbed in these unavoidable guerrilla fights incessantly springing up from the never ceasing encroachments of capital or changes of the market. They ought to understand that, with all the miseries it imposes upon them, the present system simultaneously engenders the material conditions and the social forms necessary for an economical reconstruction of society. Instead of the conservative motto: “A fair day’s wage for a fair day’s work!” they ought to inscribe on their banner the revolutionary watchword: “Abolition of the wages system!”’

Next article: Material World – A pox on capitalism ⮞