Life and Times – the climate campaigner 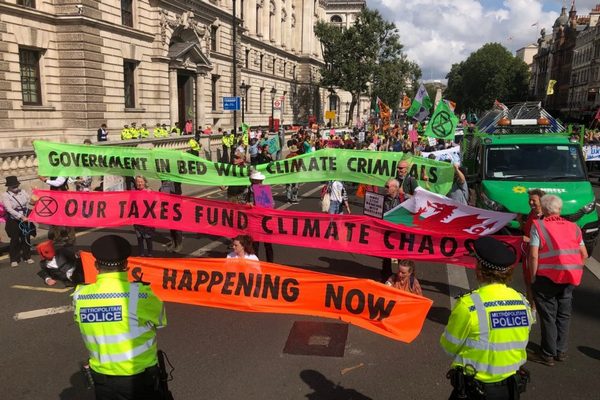 ‘Climate Chaos’ was the title of a leaflet I was handed in the main shopping centre of the town I live in. I was given it by a young woman who was also keen to engage me in conversation and let me know about the purpose of the leaflet and the group of people she was part of who were using a loudhailer to put their point across to passers-by.

She told me that fossil fuels were polluting the environment and were the main cause of climate change and the best thing I could do was to get involved in her group’s cause and spread their arguments among the local community. The group was Extinction Rebellion (XR) Cymru.

Barclays and the government

I said I found it admirable that a group of young people cared enough about the state of the world to dedicate their time and energy in trying and improve it, but I wondered whether they were on quite the right track. She asked me what I meant and I pointed to a couple of the things I’d seen in the leaflet, in particular the statement that ‘government and Barclays are both criminally responsible for destroying our future’. I asked her how she thought that different policies by either could really make a significant difference to pollution and climate change.

This could happen in two ways, she said. Firstly Barclays could stop investing in fossil fuels, since they were, in the words of the leaflet, ‘knowingly destroying the world that we depend on’. Secondly the government could ‘use our taxes to create a sustainable future’ and get HMRC to ‘stop banking with Barclays and use an ethical bank’.

I told her I understood the group’s objectives and appreciated their determination to get XR’s message across in such a public way. But I also asked her whether she didn’t think that, even if they succeeded in putting enough pressure on the government and Barclays to get them to change their environmental policies, it would be more than just a drop on the ocean and do much to change the basic situation of ever increasing degradation of the eco-system.

I could tell by the look on her face that this didn’t please her and her rather sharp response was to ask me what I was doing about it. This was unexpectedly good for me, because it gave me the opportunity to say what I wanted to say but was worried that, if I simply came out with it unsolicited, it might seem preachy or dismissive of her efforts. And I didn’t want to have that effect, since then she probably wouldn’t listen to me seriously.

So as briefly and in as broad brush a way as possible, I tried to outline the position that the Socialist Party takes on the environment and climate change. I suggested that it wasn’t a freestanding problem but one of a whole range of problems that the profit-driven society we live in creates, meaning that even if we managed to alleviate one of those problems piecemeal, we would not actually solve it (since the need for economic expansion and profit would remain key) and anyway all the other problems implicit in the system (eg poverty, inequality, war, alienation) would remain and continue to torment us. I went on to say that I do my best to communicate to my fellow-workers, people just like herself, instead of trying to change bits of the current system, to unite together to bring in a completely different kind of world society, based on voluntary work, democratic decision-making and free access to all goods and services – so no money or wages, no buying and selling, no leaders or led, no borders or frontiers. And with a final flourish, I announced that this would only be possible once a majority of us wanted it and were prepared to take democratic action to bring it about.

I didn’t know quite what to expect as a response, so I was relieved to find her nodding and saying something like ‘sounds good, but… but it’s a long way off and we’ve got to do something in the meantime’. So, though I was pleased that any hostility seemed to have melted away, her stock ‘in the meantime’ response was still a barrier which I knew I wasn’t going to be able to overcome in a short discussion, especially as she was now going to want to give out more leaflets and speak to more people. It didn’t seem right to try to detain her either, but I could at least hope that, having implanted a new idea in her mind, once the day’s leafleting and campaigning had finished, she might reflect on that idea and wonder whether it wasn’t worth considering further.

I would have liked to have had a Socialist Standard with me to give her but I didn’t. However, I’d mentioned the name of the Socialist Party of Great Britain, so that might stick in her mind and maybe, who knows, bring her to the Party’s website? And I was encouraged that her parting shot was that she understood what I was saying and realised that what XR were advocating was only ‘baby steps’, but it was surely better than nothing and she didn’t see that their aims and the Socialist Party’s were incompatible. I didn’t think it was a good idea to disagree with that, even though what I would have liked to say was that it was worth thinking about whether XR’s aims, even in the unlikely event they were fulfilled within the current system, would bring us any nearer to the establishment of a socialist world which was the only feasible way to ensure the survival and indeed the flourishing of the natural environment and of all its living creatures.

One Reply to “Life and Times – the climate campaigner”