Life and Times – the strike 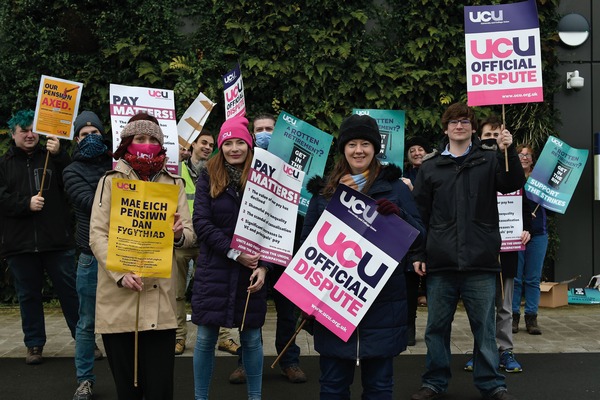 Over the last two months the University and College Union, which I’m a member of, has been taking strike action against the universities that employ them. This has involved not going into work during the strike periods, not doing any ‘extra’ work outside the strike periods (action short of a strike) and standing on picket lines holding banners and giving out leaflets to people. In the past, efforts, physical ones sometimes, would have been made to persuade those people not to cross the picket lines. But those days are over, and now it’s mainly a question of politely informing them, if they’ll listen, why you are striking. The days when postal vans and commercial vehicles would turn away from a picket are also over and now they come merrily through, sometimes hooting their horns in support, but that’s the extent of it.

Pensions
The strike in some universities is mainly about changes to pensions (in others it is more focused on pay, which has fallen significantly in real terms since 2009). University employers are planning to bring in cuts to university employees’ pensions in the USS scheme of around 35%. Staff and their unions are resisting this, as workers will naturally try to resist cuts to their living standards, whether in the present or in retirement. Negotiations have been tried but so far failed, so the only weapon workers have left is to withhold their labour, a tactic that can be successful but in this case has not so far brought about any change in employers’ intentions. And in the meantime we are losing the pay withheld by those employers for the days we are on strike.

Built-in antagonism
It’s not an easy situation, but it’s one that’s existed for workers ever since the antagonism of interests between employee and employer first started, in fact ever since the capitalist system first existed. And capitalism, in its current more advanced stage, shows no signs of removing that antagonism. Nor can it, because it’s an integral part of the system of workers selling their energies to an employer for a wage or salary and pits one’s interests against the others. It’s true to say, therefore, that the organisations that exist to defend workers’ interests, unions, are a necessary feature of capitalism, even if they don’t always manage to do that.

We’ve had no joy in this dispute yet and it may well be that we end up not having any and having to swallow lost pay for time on strike now and diminished pensions later. I hope not of course and it’s not always like that when workers go on strike. Sometimes the balance of forces is tilted in the workers’ favour, if, that is, they can cause enough disruption to the working of the enterprise they’re employed in. And then they might manage to get the pay rise or improved conditions they’re looking for and so secure a slightly larger share of the surplus value they generate. And throughout the history of capitalism, workers organising in trade unions has been a necessary and beneficial accompaniment to their struggle to maintain and, if possible, improve their living and working conditions.

Political agendas
What isn’t beneficial, however, is when unions get used for political ends by groups who see an advantage in manipulating or controlling them. These are usually Trotskyist groups who work, and often manage, to have influence in trade unions far in excess of their numbers in order to further their own political ends. This usually means urging workers to strike come what may, as a kind of article of faith. They view industrial action as a consciousness-raising operation for workers, as a rehearsal for bigger struggles to come when the vanguard these groups see themselves as will lead the workers to a different society. It’s a society in which they see the state as playing an overriding role, and, though they often call that socialism, it bears no relation to the moneyless, wageless and leaderless society of free access to all goods and services that is socialism for the Socialist Party.

And, in the strike I’ve been involved in, there seems to be a significant number of Trotskyists who’ve managed to get themselves elected to the National Executive of the UCU and are seeking to drive an agenda of strikes come what may. And in so doing, though claiming to be Marxists, they ignore Karl Marx’s own 150-year old warning that action by unions, though necessary in capitalism, cannot be more than ‘fighting with effects… applying palliatives, not curing the malady’. But for the time being union members, including myself, have sufficient hope that this particular strike is happening for the right reasons, has the backing of the majority of members and will not end up being damaging to our interests.

The struggle for money
Time will tell, but one thing is clear. The dispute I have talked about and almost all such disputes are driven by one overriding factor – money. Employers are constantly seeking to find ways of maintaining or increasing the amount of money or profit that their enterprise can yield for them, while their employees, using unions as a means of defence, are seeking to maintain (or even improve) their conditions of work or living standards, and this usually means pressing their employer not to reduce the money spent on them, or indeed to spend more on them in order to improve their conditions of work or give them better pay packets. This is just one of a multitude of ways in which life under capitalism is an ongoing struggle over money – absurd in fact at a point in history where there is sufficient potential abundance for the money and wages system to be abolished on a global scale so that the whole of humanity can do work that truly fulfils them and live fulfilling lives at all levels in a world of cooperative endeavour, voluntary work and free access for all to all goods and services.