Workers have no country 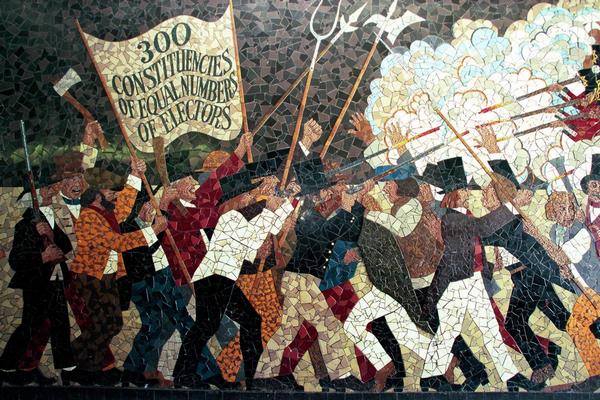 Out of the discontent of the Industrial Revolution arose the Chartist movement. The need for the whole working class to unite in one movement had come to the fore.

Many are aware of the International Working Men’s Association (the First International), in which Marx was an active participant. Few know of its precursor which most probably served as its prototype.

In the Communist Manifesto Marx and Engels stated that:

‘The working men have no country. We cannot take from them what they have not got.’

‘There is no foot of land, either in Britain or in the colonies, that you, the working class, can call your own.

‘All men are brethren’

In September 1845 the society of Fraternal Democrats was formed, adopting the motto, ‘All men are brethren.’ It was founded by some in the British Chartist movement such as Harney along with a variety of political refugees from across Europe.

‘We denounce all political and hereditary inequalities and distinctions of castes… that the earth with all its natural productions is the common property of all; we therefore denounce all infractions of this evidently just and natural law, as robbery and usurpation. We declare that the present state of society, which permits idlers and schemers to monopolise the fruits of the earth and the productions of industry, and compels the working classes to labour for inadequate rewards, and even condemns them to social slavery, destitution, and degradation, is essentially unjust.’

It also made a commitment to internationalism:

‘Convinced that national prejudices have been, in all ages, taken advantage of by the people’s oppressors to set them tearing the throats of each other, when they should have been working together for their common good, this society repudiates the term ‘Foreigner,’ no matter by, or to whom applied. Our moral creed is to receive our fellow men, without regard to ‘country,’ as members of one family, the human race; and citizens of one commonwealth – the world.’

In one of his addresses to the Fraternal Democrats, Harney explained:

‘Whatever national differences divide Poles, Russians, Prussians, Hungarians, and Italians, these national differences have not prevented the Russian, Austrian, and Prussian despots uniting together to maintain their tyranny; why, then, cannot countries unite for obtainment of their liberty? The cause of the people in all countries is the same – the cause of Labour, enslaved, and plundered… In each country the tyranny of the few and the slavery of the many are variously developed, but the principle in all is the same. In all countries the men who grow the wheat live on potatoes. The men who rear the cattle do not taste flesh-food. The men who cultivate the vine have only the dregs of its noble juice. The men who make clothing are in rags. The men who build the houses live in hovels. The men who create every necessary comfort and luxury are steeped in misery. Working men of all nations, are not your grievances, your wrongs, the same? Is not your good cause, then the same also? We may differ as to the means, or different circumstances may render different means necessary but the great end – the veritable emancipation of the human race – must be the one end and aim of all.’

He elaborated on his internationalist ideas in the journal, The Northern Star (June 19, 1847):

‘The people are beginning to understand that foreign as well as domestic questions do affect them; that a blow struck at Liberty on the Tagus is an injury to the friends of Freedom on the Thames; that the success of Republicanism in France would be the doom of Tyranny in every other land; and the triumph of England’s democratic Charter would be the salvation of the millions throughout Europe.’

‘But let the working men of Europe advance together and strike for their rights at one and the same time, and it will be seen – that every tyrannical government and usurping class will have enough to do at home without attempting to assist other oppressors.’

In 1848 when a British military intervention against France looked possible, the Fraternal Democrats issued a manifesto which said:

Harney also published a newspaper, The Red Republican, to educate his working-class readers about socialism. The journal of July 1850 explained:

’As regards the working men swamping all other classes the answer is simple – other classes have no right to exist. To prepare the way for the absolute supremacy of the working class preparatory to the abolition of the system of classes, is the mission of The Red Republican.’

In 1850 The Red Republican carried the first English translation of The Communist Manifesto, describing it as ‘The most revolutionary document ever given to the world’. 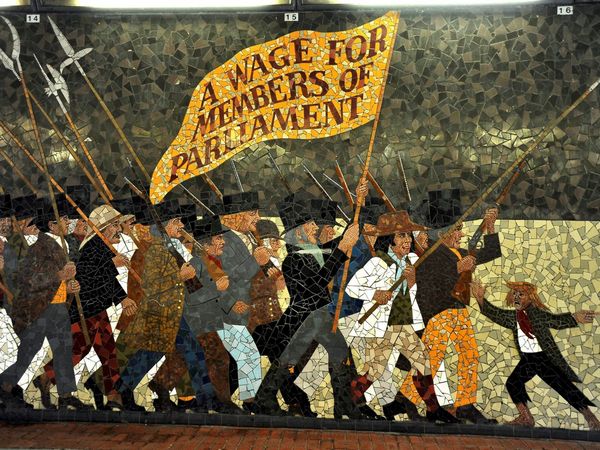 ‘The poor have no country’

Another Chartist activist, Ernest Jones, wrote in The People’s Paper of 17 February, 1855:

‘Is there a poor and oppressed man in England? Is there a robbed and ruined artisan in France? Well, then, they appertain to one race, one country, one creed, one past, one present, and one future. The same with every nation, every colour, every section of the toiling world. Let them unite. The oppressors of humanity are united, even when they make war. They are united on one point, that of keeping the peoples in misery and subjection… Each democracy, singly, may not be strong enough to break its own yoke; but together they give a moral weight, an added strength, that nothing can resist. The alliance of peoples is the more vital now, because their disunion, the rekindling of national antipathies, can alone save tottering royalty from its doom. Kings and oligarchs are playing their last card: we can prevent their game. No movement of modern times has therefore been of such importance, as that international alliance about to be proclaimed…’

In yet another article in The People’s Paper (3 March, 1855), Ernest Jones declared:

‘Let none misunderstand the tenor of our meeting: we begin tonight no mere crusade against an aristocracy. We are not here to pull one tyranny down, only that another may live the stronger. We are against the tyranny of capital as well. The human race is divided between slaves and masters… Until labour commands capital, instead of capital commanding labour, I care not what political laws you make, what Republic or Monarchy you own – man is a slave.’

It reflected the view as later expressed by the First International:

‘…The poor have no country, in all lands, they suffer from the same evils, and they, therefore, realise that the barriers put up by the powers that be the more thoroughly to enslave the people must fall. It is the poor, above all the poor, who will realise the dream of the gentle Anacharsis de Cloots, the orator of the human race, who will bring into being the great federation of the peoples. So come, young people, and help us accomplish this lofty task of the nineteenth century…’ (To the Paris Students, To the Students and Young People of All Countries From the Workers of All Countries, 1866.)

The Fraternal Democrats, the Chartists and the International Workingmen’s Association disappeared but not their principles. The idea of working peoples’ international solidarity persisted.

Today, it is put forward by the World Socialist Movement.

2 Replies to “Workers have no country”