Across the world, workers are enduring the consequences of capitalism’s inability to deal with its many problems. Sri Lanka, the island state of 21 million people, is one more country to add to the long list where our fellow workers are facing deep insecurity in the coming months. 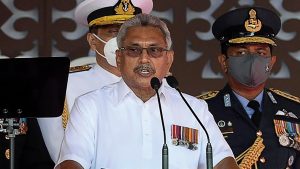 President Gotabaya Rajapaksa declared Sri Lanka to be in an economic emergency but has done little to ease people’s plight. Workers have to bear the brunt of the economic crisis by themselves due to the lack of effective social protection. It is working people who make the economy. 2020 figures show the garment workers brought in US$5 billion and tea plantation workers US$1.4 billion. Yet, most lead precarious lives forced to shoulder the effects of budget cuts on education, health care and public transport.

Sri Lanka is entering a humanitarian crisis caused in part by the impact of Covid. The World Bank estimates 500,000 people have fallen below the poverty line since the beginning of the pandemic. Within the tourism sector, more than 200,000 people lost their livelihoods. Once bringing US$4 billion to the country, the tourism industry is struggling to stay afloat. By October last year, it brought in just US$82 million. From close to 2 million tourists in 2018, the island nation received just 160,000 in 2021.

The government printing money to help pay off domestic loans and foreign bonds has created overall inflation of 12 percent in December and those escalating prices have left many basic necessities unaffordable. Food prices rose by a record 22.1 percent in December. Supermarkets have for months been rationing milk powder, sugar, lentils and other essentials as banks ran out of US dollars to pay for imports.

A top agricultural official warned of impending famine and requested the government to implement an orderly food rationing scheme to avoid such a scenario. He was fired within hours of making the appeal.

The food crisis was worsened by the government’s April 2021 ban on agrochemical imports with an intention of switching agriculture to being organic. The policy was reversed in November after crop yield falls and protests by farmers.

Sri Lanka has a huge foreign debt burden. It owes China more than $5bn and last year took an additional $1bn loan from Beijing to alleviate its financial crisis, which is being paid in instalments. Struggling to pay back Chinese loans, it has handed over the majority share of the Hambantota port to a Chinese state-owned company on a 99-year lease.

In 2022, it will be required to repay an estimated $7.3bn in domestic and foreign loans. However, as of November, available foreign currency reserves were just $1.6bn.

The former central bank deputy governor W A Wijewardena warned the country was at substantial risk of defaulting on its repayments, which would have catastrophic economic consequences. In one article (tinyurl.com/2dsf9rzv), he attributes a reason for the crisis to the acceptance of the now fashionable but fallacious economic idea called the Modern Monetary Theory (or MMT ) that argues that there was nothing wrong in governments running budget deficits to create employment, output, and prosperity. Assured by the advocates of MMT that this does not affect inflation or exchange rates, the government allowed various measures of the money stock to rise excessively, Wijewadena says:

The outcome of the increase in the money stock was an undue increase in the demand for imports, prompting the government to impose import controls even on raw materials. It affected the production of goods and services. Sri Lankans are now going hungry.

The government hopes to settle their past oil debts with Iran by paying them in tea, sending them $5m worth of tea every month in order to save much-needed currency.

It has introduced temporary measures, such as credit lines to import foods, medicines and fuel from India, as well as currency swaps with India, China and Bangladesh. However, these loans have to be paid back at high-interest rates, and simply add to the debt burden.

Sri Lanka’s history has shown that capitalism has not provided economic security. In response to the high prices and excessive money-printing, workers are going on strike demanding higher wages to compensate for the spiralling inflation, as in the health service whose strike the government has declared illegal (tinyurl.com/55tw2ayh). Several powerful trade unions in the country, from postal workers to railway workers, from teachers to doctors, have started demanding higher pay and are threatening to launch massive strikes unless their grievances are met.