Was Money Abolished in Cambodia? 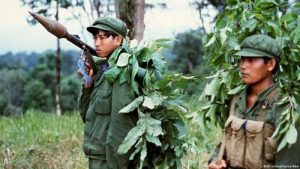 The Khmer Rouge governed Cambodia from 1975 to 1979. It was an authoritarian regime, possibly responsible for as many as two million deaths, the result of famine and executions. One of its policies still sometimes remembered today is its supposed abolition of money. As self-proclaimed ‘Communists’, the Khmer Rouge leaders allegedly wanted a society with no wages or means of exchange, hence no money.

Some writers claim that this abolition of money had, and still has, negative consequences for Cambodian society. For instance, an article by Sheridan Prasso (eastwestcenter.org, January 2001) claimed that, although money had by then been in use again in Cambodia for over twenty years, its former abolition had made people there distrustful of money, hence their preference for US dollars or gold and the ineffectiveness of the Cambodian financial system. More recently, Anirudh Bhati (mekongresearch.org, 19 June 2018) has argued that Cambodia under the Khmer Rouge had no money, private property or trade, and states that ‘without money — and therefore without effective trade — there is no possible freedom.’ As can be seen, supporters of capitalism have sometimes seen the abolition of money in Cambodia as an argument against socialism, against the very idea of a moneyless society based on free access.

But it simply is not true: the Khmer Rouge did not do away with money in Cambodia. This was pointed out by an article in the October 1978 Socialist Standard, citing contemporary reports of various kinds. There was still exchange of some goods, and rice, fish and rubber were exported in order to acquire foreign currency. Most Cambodians lived on little more than rice, and that probably was distributed without using money, but the Khmer Rouge and their soldiers were better fed and clothed than the rest of the population: privilege need not imply having greater access to money. Ieng Sary, a Khmer Rouge leader, had accepted in 1976 that a monetary system might be set up later, but in fact such a system already existed, even if ordinary Cambodians had few or no dealings with it. As Prasso says, Khmer Rouge leader Pol Pot ‘apparently concluded that money was fine for the state but not for its people’.

This whole issue was recently raised again by James Tyner in an article ‘“Currency is a Most Poisonous Tool”: State Capitalism, Nonmarket Socialism, and the Elimination of Money during the Cambodian Genocide’ in the open-access on-line journal Genocide Studies and Prevention Volume 14, 2020. He notes correctly that, ‘Marx’s vision of a stateless, moneyless and classless society aimed to encourage the fullest development of human consciousness and creativity’, and then investigates to what extent the Khmer Rouge approached this goal.

Before seizing power, Khmer Rouge leaders had discussed abolishing money, and they announced its supposed elimination in September 1975, just five months after taking control. Workers received food rations, with more for those who performed the heaviest manual labour. Rations were fixed but the working day was expanded, resulting in an increase in what Marx termed absolute surplus value (see Capital Vol 1, chs 12 and 16). But the rulers still needed to ‘raise investment capital for a moribund industrial sector’, and this was done by exporting rice and other goods for sale. Tyner writes that ‘On the one hand, party leaders participated in the monetary-based global economy as state capitalists while, on the other hand, they instituted a nonmonetary, nonmarket domestic economy’ and ‘the resultant economic order of Democratic Kampuchea resembled more so a hybrid form of state capitalism and nonmarket socialism than it did either a barter economy or an economy of associated producers as envisioned by Marx.’ But there simply cannot be a mixture of state capitalism (or any form of capitalism) and socialism: the former has money, wages, profits, the latter has none of these. The vast majority of Cambodians certainly did not live in a society of free access and democratic control: they were extremely poor and subject to brutal exploitation and oppression.

One noteworthy aspect of his article is the fact that the idea of state capitalism is almost seen as commonplace, not something that needs to be described or explained at length. A footnote defines it as ‘a political-economic system of governance whereby a ruling party controls the state apparatus and in turn manages the means of production in order to appropriate surplus value’, and refers to writers such as Tony Cliff and Richard Wolff.

Marx certainly advocated a society without money (see the Socialist Standard for April 1980), but he saw money’s disappearance as part and parcel of the establishment of common ownership and production for use by workers who supported this and were prepared to make it work. It was not something that could be done by itself, with few or no other changes in society, and certainly not after a military takeover of the state, as happened in Cambodia.

One Reply to “Was Money Abolished in Cambodia?”