To Grow or Not to Grow?

‘Growth’ is defined by Investopedia as ‘an increase in the capacity of an economy to produce goods and services, compared from one period to another’. What’s wrong with that? Isn’t it a good thing for society to be in a position to produce more? It certainly has been in the past – if it hadn’t been for growth, the world would not be capable, as it now is, of satisfying adequately the needs of every, man, woman and child on Earth—but it is also a question of what is produced, how it is produced, and why it is produced. 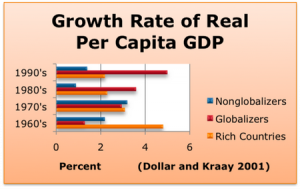 Production today is carried on by firms, whether private or state, competing to sell their products and convert into money the new value added in the course of their production. This puts them under economic pressure to produce goods as cheaply as possible, to use the cheapest raw materials and the cheapest sources of energy, even if these are non-renewable and irrespective of whether or not they harm the environment, as burning fossil fuels has been, and still is, doing.

Production today is not carried out to directly satisfy people’s needs. Its aim is to make profits for the private or state enterprises that control production. People’s needs are met, even if not adequately, but only as a by-product of their economic role as workers, whose consumption is limited by the amount of wages they are paid. This is why goods are not made to last as long as they could be. If they were most people would not be able to afford them.

Production today is geared to increasing productive capacity – or growth. This is not a voluntary decision on the part of business owners, but something forced on them by the nature of capitalism as a competitive struggle between different firms for profits. To stay in business, firms have to invest in reducing the cost of production of what they are selling; to increase output per worker by having those they employ work with more up-to-date machines. The first firm that innovates in this way reaps a surplus profit but this will only be temporary as other firms soon follow suit. The result, across the economy, is an increase in productive capacity. This – growth — is not something that can be avoided as long as capitalism continues. It is built-in to the system.

Quite an indictment of the capitalist economic system. This has led many of those concerned about the environment to question growth as unsustainable from an ecological point of view. Some call for ‘sustainable growth’ (as growth that doesn’t waste resources or harm the environment); others want ‘no more growth’, and yet others even ‘de-growth’. But none of these can be realised within capitalism because, under it, production is in the hands of competing private or state enterprises responding to market forces which nobody, not even governments, can control.

The issue can be usefully debated and publicised under capitalism but campaigns for any of the options to be implemented while capitalism still operates are a waste of time. The most that can be expected is some timid and belated moves towards ‘sustainable growth’, but only when this has become profitable due to the rise in the cost of obtaining diminishing non-renewable resources or of having to deal with the effects of global over-warming.

Before any of these options could be implemented there has to be a revolution in the basis of society making the Earth’s natural and industrial resources the common property of whole of humanity. No longer owned by rich individuals, corporations or states, they will simply be there to be used, under various forms and levels of democratic control, to directly produce what people need. Only then will humanity be in control of its productive activity.