Can we panic now, Captain Mainwaring?

In the halcyon summer days of 1914 when all was right with the world and God was in his place in the British empire, dependent upon your social status in the scheme of things of course, the shock caused by the assassination of some minor Austrian prince was seen as an opportunity to bare Albion’s teeth to Johnny Foreigner, and everywhere the cry echoed down the expansive avenues and the meanest back alleys: ‘It will all be over by Christmas!’ Plus ça change, plus c’est la meme chose. Isn’t it just?

We all know Marx’s remark that history repeats itself, the first time as tragedy and the second time as farce. Marx had in mind the tragedy of Napoleon’s regime and the later farcical reign of his nephew Napoleon III. Back in the 1960s, Herbert Marcuse remarked that the lesson of Nazism seemed to be the opposite way round: first as a farce (throughout the 1920s, Hitler and his gang were mostly taken as a bunch of marginal political clowns), then as a tragedy (when Hitler effectively took power). Unfortunately, Karl, old boy, history seems to be in a place whereby it’s repeating constantly, like a three-week-old pickled egg. It’s doesn’t feel the least bit humorous this time round.

Crystal balls are not de rigeur for writers in this journal, but, this from the Socialist Standard, December 2020, seems a little prescient: ‘Eat, drink’ depends on whether the supply chains are still intact and irrational locust behaviour hasn’t swept the shelves cleaner than vultures on a wildebeest carcass in the Serengeti. Be merry? The human spirit is always able to find something positive in the most dire of circumstances. Acceptance of a bad situation whilst saying, gosh it’s terrible but there’s nothing we can do about it, is not acceptable however. After one of the most dramatic years which continuing on may have profound negative societal changes in global society it is no longer good enough to complainingly accept what is being implemented. Contrary to what a Tory leader once said, there is an alternative’. 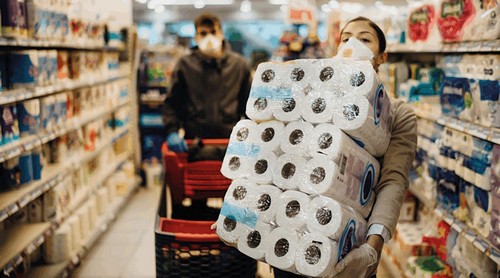 At present the supply chains seem to be under considerable strain and there are apocalyptic warnings that toys, electricals and luxury goods all the way from China may not be lining the shelves of those stores and outlets which rely on the Christmas period in a ‘normal’ year to provide them with a hefty addition to their annual turnover. Had they but known then, the Ypres Times would have been running op-eds on how much better off they all were stuck in the trenches at Christmas, rather than the terrible deprivation of not getting your overpriced disposable trash-trinkets delivered in time.

The Mail Online, September 2021 has: ‘Panic buying is back! Shoppers queue to fill up trolleys with toilet roll and other essentials after one in six couldn’t find what they wanted on the shelves as supermarket bosses are told to co-operate to save Christmas and petrol shortages continue’ and ‘Shelves empty across UK on sell-out Saturday as supply crisis leaves one in six Britons claiming they have been ‘unable to buy essential food’ – and a third start Christmas stockpiling – ahead of winter squeeze’.

The sense of déjà vu cannot have long left the memory. As the Institute of Economic Affairs noted in sanguine tones, in the days when we didn’t even need to wait until Christmas because this would all be well over within three weeks: ‘No-one can have failed to notice the half-empty supermarket shelves and long queues for essentials. Loo rolls even rivalled flowers as the Mother’s Day gift of choice. Fortunately, this is one phase of the coronavirus crisis which should be over soon'(March 2020). Up to a point, Lord Copper, up to a point. The IEA didn’t borrow the services of Corporal Jones in order to tell us all ‘Don’t panic! Don’t panic!’ A stiff-upper-lipped ‘Keep calm and carry on’ seemed to be their advice. What have we here? Were they employing the economic tenets of Adam Smith or Malthus? Panic buying? Fine chaps, no problem! Carry on, as you were.

The IEA: ‘To be fair, panic buying is not necessarily irrational, for two reasons. The first is that the fear of empty shelves may be correct because it is self-fulfilling. Panic buying is similar. It would be best if no-one does it. But if you are worried that supplies might run out because other people will beat you to it, then it makes sense for you to rush to the shops too… However, there is also a second factor to consider here: even if there are plenty of goods in the pipeline and shops will soon be well stocked, some people may be unable to get to them. As the new coronavirus spreads, any household in the UK could be obliged to self-isolate for a period of several weeks, or even longer, at a moment’s notice. It may then make sense for every household to buy several weeks of essentials, just in case.’

Hang on there Jack, as the economists have it, ‘ceteris paribus,’ we’re not on an equal and fair playing field here are we? If you’ve the sufficient disposable income, the transport, the freezer space, the storage space for your six months or more supplies, plus the utter contempt for the plight of others less fortunate, then good for you Jack. That’s a rational capitalist economic decision. Foxtrot Uniform, I’m alright. This form of economic selfishness no doubt has opponents of socialism (who generally misunderstand what that is anyway) leaping about like the ten lords in the Christmas carol, waving their fingers and chanting in E flat Major, human nature! human nature! The Socialist Party’s demolition of this spurious straw man is amply demonstrated elsewhere. 2021 was certainly another year seeing profound negative societal changes in global society. And as amply demonstrated by us, there is an alternative.