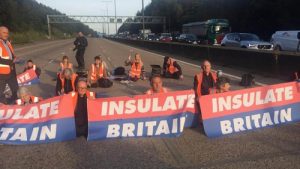 Last month UK climate activists staged a number of sit-down protests in the middle of the M25 motorway, causing hours of tailbacks, associated costs and delays, and allegedly some collisions. The optics on this were not favourable. The papers roundly condemned the tactic, pointing out that, aside from the safety concerns, causing standing traffic jams was environmentally something of an own goal. And inevitably, the Daily Star‘s description of them as ‘Tarquins’ and ‘soap-dodging posh boys’ underlined the disconnect between the perceived middle-class nature of climate protesters and the reality of life for hard-pressed workers trying to go about the daily grind of wage slavery. When you’re trying to motivate the public to act quickly and drastically on climate change, reminding them that you have the leisure and lifestyle to go and sit on motorways during the working day, while preventing them from making their works’ deadlines or minimum wage van deliveries, is a great way to put the kibosh on any hope of united class action.

Not that class unity is on the minds of Insulate Britain (IB), who are demanding that the government pay for the insulation of the UK’s 29 million aged and ‘leaky’ homes, at an estimated cost of between £360 and £640 billion, on the argument that the investment would pay for itself ‘economically, environmentally and socially’ over a 25-year period (bit.ly/2XuyQsU).

One is entitled to speculate about IB’s grip on reality when their section on science begins with ‘The science is clear. We are facing an unprecedented emergency that will destroy this country’ (insulatebritain.com). Really, destroy the country? Still, there’s no question they’re right about the need to upgrade the housing stock to reduce energy waste, and they may be right that investment would pay for itself in the long term. They’re certainly correct that the government’s investment in this area is ‘derisory’. But here’s where there’s another disconnect in the thinking.

It’s probably true to say that if private householders invested a large sum up front in retro-fitting energy-saving upgrades, they would see benefits in the fullness of time. So why don’t they?

The obvious answer is, they can’t afford it. IB knows this very well. Their own sources state that 25 years is ‘clearly longer than the planning horizon for most households’, a rather euphemistic way of saying that people have to worry about making ends meet today, not making savings next year or next decade.

Where the disconnect exists is in not appreciating that 25 years is also beyond the planning horizon for most governments.

We’re not going to make excuses for any government, particularly Boris Johnson’s shambolic and egocentric ‘presidency’, but if you’re going to be in charge of a capitalist government then you’d better operate within the immediate priorities, which may not include expensive long-term green schemes.

The UK state is around half a trillion quid out of pocket due to the pandemic, such that the anti-tax Tories have been driven to ignore their own manifesto pledge and raise taxes and business tax, freeze pay and pensions, and cut public spending. They are in hock up to the hilt, with GDP – the government’s taxable source of income – down by 22 percent after the ‘biggest annual contraction in over 300 years, since the Great Frost of 1709’ (bit.ly/2VLRWK9).

Some credit cranks believe that banks can create money on demand, at any time and without dire consequences, a fantasy view of economics frequently criticised in these pages. Single-issue activists sometimes have a similar lazy tendency to imbue governments with the magical power to waft vast sums into being, at any time and for any purpose, on the assumption that if they don’t it’s only because they are complacent Tory bigots who don’t care or don’t understand the problem. The idea that governments with all their billions simply can’t afford some things doesn’t occur to some activists, especially those who regard ‘politics’ as irrelevant, and who therefore don’t comprehend why it’s more important to states to squander fortunes on aircraft carriers and nuclear submarines than on hospitals and decent pay for carers.

Capitalist governments may have skewed priorities but they don’t have infinite funds. They get their income from taxing the profits of the rich, either directly through corporation tax or indirectly via workers’ income tax. If they tax too much, they’ll have the rich down on them like a ton of bricks. Alternatively they can borrow, and have been doing lately in spades, but then they end up robbing Peter to pay Paul. So, just like householders, they tend to be short-termist. Instead of investing effort and resources in fireproofing for the future and preventing global warming, as socialism would do, they fritter away money firefighting in the present, with their minds on the next election rather than on the next century.

The trouble with IB’s demand to insulate every house is not that it’s a silly idea. It’s a very good idea, and would very likely be a top priority in a post-capitalist non-market society able to do what’s needed instead of what’s cheapest. But in the present system the scheme looks vanishingly unlikely. Most people intuitively know that the rich aren’t going to shell out for the public good, and that governments do what the rich want and not what the poor need. So as well as pissing workers off by blocking motorways, IB’s stunts also reinforce a public sense that environmental activism is one giant exercise in sincere but child-like naivety.

And the public sense is not wrong. In the fond hope of building a broad coalition, activists continue to pretend that the environment is not a political matter. But everything in capitalism is a political matter, especially where profit is concerned. The road protesters who blocked the M25 ended up being arrested. In some parts of the world they might have faced much worse. Environmental activists across the world are being murdered at the rate of 4 a week by vested interests (bbc.in/3hDGk3F). What is killing them is the class war.

The only way to stop this class war is for workers to win it, and to do that we need to organise collectively to end capitalism and the choking stranglehold of the rich. Environmentalists who insulate themselves from class politics by appealing to governments for change are like mugging victims getting a kicking and appealing to the muggers to wear softer boots.

One Reply to “Pathfinders”