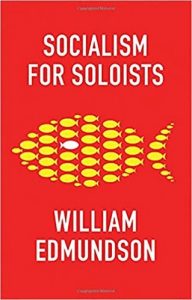 This is an attempt to present a case for socialism – as a society without private ownership of means of production – on the basis of classic liberal-democratic political philosophy. Edmundson’s ‘soloists’ are individualists, what in the US are called ‘libertarians’, people who believe that individuals have natural rights that no government should override. He imagines them in a ‘state of nature’ (as this philosophical tradition does) and sets out to convince them that it would be logical for them to sign up to a ‘social contract’ which would exclude private ownership of means of production. His basic argument – which is valid – is that such private ownership is incompatible with political equality and democracy as it gives the owners more say in decision-making than non-owners.

However, he has a peculiar definition of ‘means of production’. Normally this means the materials (which will all have originally come from nature) and instruments (buildings and machinery) used to produce wealth. His definition is that they are production facilities that can neither be ‘commons’ to which everyone has free access nor be operated by separate individuals. Besides large-scale manufacturing plants this includes transport, utility and communications networks and also online sales platforms and banks.

So he ends up, if by a different route, advocating what the Labour Party used to years ago, namely, the public ownership of ‘the means of production, distribution and exchange’. He writes that ‘one common misconception about socialism is that it dispenses altogether with markets.’ This is wrong on two counts. It is not a misconception and, unfortunately, is not that common. His ideal society still involves the continuation of production for sale, working for wages, and unequal money incomes. The blurb on the back calls it ‘market socialism’ but that’s a contradiction in terms. In fact, it would still be capitalism.

Unlike many academic books, this one is easy to read and might perhaps be of some use to philosophy and politics students to refute some of the arguments in favour of private ownership that they will be taught. 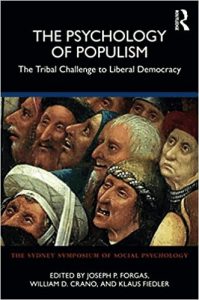 The stated aim of the 19 essays making up this book is, according to its editors, ‘to contribute to a better understanding of the nature and psychological characteristics of populist movements’. They further state that they ‘hope to highlight the fundamental threat that collectivist popular beliefs and strategies, both on the left and right of the political spectrum, present for the core values and the very survival of liberal democratic systems’. The shared understanding, implicit where not explicit, of all the authors is that the combination of the market with capitalist democracy constitutes ‘the most successful civilisation in human history’, and that modern populism, arising from both left and right, has certain common features such as rejection of liberal democracy, ethnocentrism, tribalism, xenophobia, emotional and/or identity-based politics, and feelings of personal impotence.

Current examples of governments considered populist whose features are analysed here are those of Poland, Hungary, Turkey and Russia, while strong populist movements in countries like France, Germany, Austria and the US are also subjects of study and discussion. Support for populism in these countries is seen as arising from such sources as simplistic beliefs, feelings of frustrated self-importance, ‘self-uncertainty’, a ‘need for personal significance, and the ‘human search for a meaningful world view’. And the detailed supporting analysis is often interesting and well evidenced.

But even though much of the analysis in these essays is acute and telling, many of the authors are too quick to identify what they term as left-wing populism with ‘Marxism’. In their introductory chapter, for example, the editors refer to Marxism as one of the ‘clear and well-articulated populist ideologies’ and the sworn enemy of any kind of individualism or tolerance. Referencing writers from the past with particularly strong pro-capitalist and anti-Marxist agendas such as Arthur Koestler and Karl Popper, they describe Marxism as featuring ‘the same degree of authoritarianism, dogmatism and intolerance also found in right-wing totalitarian movements’. The problem here, as with the ‘authorities’ they quote, is that by Marxism is meant dictatorial states which bear no relation to the thinking of Marx, regimes such as the Soviet Union or Mao’s China (well described as ‘a famine-wracked disaster’) and, in more recent times, countries often referred to as ‘Marxist’ such as Cuba and Venezuela, but again representing a travesty of any lesson to be drawn from Marx’s writings. And, again, on the ideological front, they refer not to Marx’s own writings or prescriptions but to Lenin’s distorted version or implementation of these and to modern-day theorists, often self-styled ‘Marxists’, who ‘share a strongly critical attitude to Western liberal values, a romantic attachment to anti-enlightenment communalism, and a cold-eyed focus on power as the major social issue of interest’.

The trouble is that what the authors are describing here has nothing to do with the analysis and theory which is at the root of Marx’s writings, seeking as it does to transcend so-called ‘liberal values’ and pointing to the need for a world society of common ownership and democratic control and of free access to all goods and services, where human beings, far from their individualism being denied or oppressed, are in ultimate control of their own choices and their own individual existence.

While this volume contains much that is instructive and thought-provoking for an understanding of how populism arises and is practised, it fails on the whole to see that it is the political and other divisions produced by capitalism’s so-called ‘liberal democracy’ that are the real lightning rod for the very populism it is dedicated to exploring and critiquing. And the notion with which it is shot through that individual freedom is incompatible with collective organisation is fundamentally wrong-headed. The ‘collectivism’ it continually refers to and deplores is that of dictatorial or semi-dictatorial regimes or ideologies, not that of a world society organised democratically to satisfy everyone’s needs. 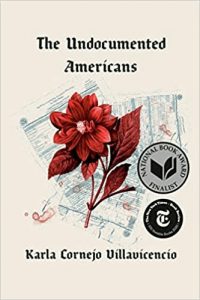 Exploited and Spat Out

There are eleven million ‘undocumented’ people in the US, mostly Latinx (a term that covers both men and women). The author was one, having followed her parents to New York from Ecuador aged four, though she has since received her green card, which makes her a permanent resident (her parents still aren’t). Her book gives a vivid and personalised account of the lives of undocumented workers.

The undocumented have no access to health care (other than Emergency Rooms), and an example is given of a man who died of brain cancer after being turned away by a number of hospitals. They have no retirement plans and few savings. Many come in order to send money back home for their children to get an education, but find themselves barely able to make ends meet: ‘This country takes their youth, their dreams, their labor, and spits them out with nothing to show for it.’

Several thousand undocumented workers are forced to be day-labourers, waiting on street corners for contractors to choose them for a day’s work. They are often cheated of their wages, and even left stranded in the middle of nowhere. Some worker centres have been set up to try and give them some kind of protection. Lots of undocumented immigrants were killed on 9/11, though it is impossible to say who or how many, and many helped to clear up in the aftermath, and working there has left some of them with severe medical conditions, from cancer to arthritis.

A chapter deals with Flint, Michigan, former centre of the car industry and notorious for having lead in its drinking water. Flyers on this were issued only in English, and when people went to houses to tell residents not to drink the tap water, many undocumented did not open their doors, for fear the visitors were from the immigration authorities. Distribution centres handed out bottled water, but only to those with a state ID, which the undocumented in Michigan were barred from having. A mother with lead poisoning breastfed her baby, and this resulted in the child being temporarily blind. She regained her sight, but nobody knows the possible long-term effects on her.

The main government body that creates problems for the undocumented is Immigration and Customs Enforcement (ICE), ‘the creation of 9/11 paranoia’. Some ‘vultures’, as Cornejo Villavicencio calls them, claim (for a price) to invoke spirits that can protect against ICE. The threat of deportation is, however, real, and a few seek sanctuary in churches, which ICE do not enter.

The author agrees with the statement that Americans treat their pets better than they treat immigrants. Her book demonstrates how much US capitalism makes use of cheap labour power and how the whole system regards people at the bottom of the heap.