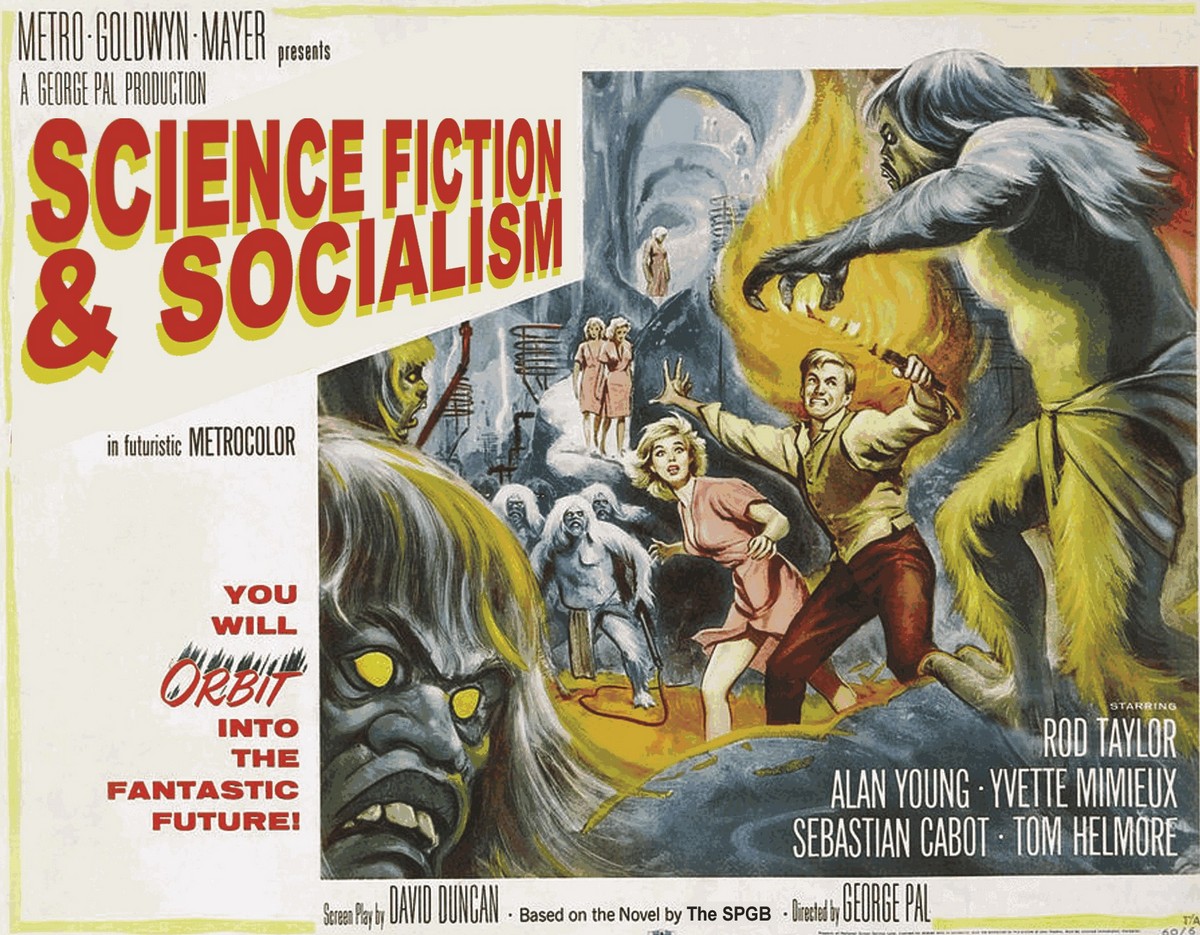 ‘We have described a World-in-which-we’d-love-to-live… The way we see it, this is a world where creative labour is the ultimate satisfaction and the source of happiness for people. Everything else is built on the foundation of this principle. People are happy there when they manage to actualise this main principle. Friendship, love and work are the three main pillars that support the happiness of such humankind. We could not imagine anything better than that, and why would we want to?’ Boris Strugatsky.

What kind of society would appeal to a socialist? What kind of life would we actually enjoy once the logic of capitalism driving the world of today releases its grip not only on the resources of Earth – material or human – but also on the minds of its inhabitants? I believe that in order to promote the socialist cause, we need to have a clearer understanding of answers to these questions. There is a caveat there, of course, that what is appealing to people today may not stay the same in the future.

I have to confess, I am a sucker for sci-fi. And when it comes to sci-fi, I am omnivorous, reading and watching anything I can get my hands on. There is probably a hidden yearning for a better future in this passion, as I am particularly interested in the fiction about Earth-like worlds, especially those that are more developed than ours. But I have recently noticed an interesting feature of the vast majority of the sci-fi visions of the future: they are overwhelmingly dark, presenting rather a failed world than a successfully developed civilisation. Aldous Huxley’s Brave New World, George Orwell’s 1984, Evgeny Zamyatin’s We, Philip K. Dick’s Do Androids Dream of Electric Sheep? or his post-World War II fascist America in The Man in the High Castle… Cyberpunk is a good example of a genre that produced enormous quantities of dark sci-fi works, and post-apocalyptic fiction writers have been prolific on this topic as well. Seems like the future people foresee in fiction as the most likely is not very bright at all. Beginnings like ‘after an ecological catastrophe wipes out most of humanity…’ or ‘It’s the future, and the planet is a dusty, radioactive wasteland…’ sound like a cliché in a film about the future. And technological breakthroughs gone horribly wrong are a really popular theme, with many examples brilliantly shown in the Black Mirror series.

Of course, there is a sub-genre that focuses specifically on the stories about ‘perfect’ worlds – Utopias. Ironically, when searching for utopias on Google, it is quite hard to find any – the search engine stubbornly shows ‘best dystopias’, and even articles on utopias often discuss mostly dystopian books and films. My first several ‘utopian books’ searches returned the Vulture’s 100 Great Works of Dystopian Fiction, Tales About A World Gone Wrong and a BBC article Science Fiction: How Not To Build A Future Society. Maybe a good drama needs suffering, and this is why tragedies have always enjoyed more popularity than comedies? Whatever the reason, the number of utopian worlds seems to be surprisingly small. Do any of them offer appealing visions of a socialist or a socialist-like world?

There are some notable examples, such as Ursula Le Guin’s The Dispossessed, B. F. Skinner’s Walden Two, and Marge Piercy’s Woman on the Edge of Time. These and some other novels describe interesting social innovations, which are often very close to socialist ideals. For instance, the utopian world in Woman on the Edge of Time promotes such values as common ownership and (gender) equality; the inhabitants of the Walden Two community are free to choose their vocation and have no police force that could enforce their will through violence; and on the moon of Anarres in The Dispossessed, everyone is free to start their own productive enterprise, where there is no incentive to grow production or compete since there is no market, so all production is aimed solely to fulfil everyday needs.

While many ideas described in these and other books are worth discussing and thinking about, some details are questionable or even disturbing. For example, Skinner’s Walden community has a set of guardians who are somehow wiser than the ‘common people’. Skinner himself believed in the need for elitist rule: ‘We must delegate control of the population as a whole to specialists – to police, priests, teachers, therapies…’ (John Staddon, The New Behaviorism, 2014, p.125). The utopian agrarian community of Piercy’s Mattapoisett (Woman on the Edge of Time) shows a governmentally decentralised egalitarian society, mostly based on feminist and anarchist ideals. The world of Mattapoisett at times comes through as a fantasy, a feverish dream in the mind of a person in a mental institution under the influence of heavy tranquillisers, propelled by the feelings of powerlessness and grief. We are never told in the book if the visions the protagonist had are true or not. Would I want to live in Mattapoisett? Probably not. It seems quite focussed on offering the alternative to the patriarchal and exploitative capitalist ways of life, but more in the way of renouncing something negative rather than by offering something viable and attractive in its own right.

Importantly, it is still not clear on how this set of communities (or the one on Anarres in The Dispossessed) is supposed to work: both rely on self-governance and the structures of meeting and discussion, which might function well on the level of a town but certainly not a planet. Ursula Le Guin is perhaps more realistic in her novel, because Anarres in The Dispossessed is not shown as a Garden of Eden. It is a barren and dirty world, where life is decidedly hard for its inhabitants. Do any of them offer appealing visions of a socialist or a socialist-like world? They also have problems with their PDC (Production and Distribution Coordination), which exhibits some signs of government. In any case, it is probably not the best example to illustrate the advantages of a socialist society. But I guess my biggest problem with most utopias is that they simply don’t appeal to me; I wouldn’t want to live there myself.

I understand, writing utopias is hard. Unlike dystopias, it is not as simple as to show some horrors of destruction or societal decay (which could be easily borrowed from a daily tabloid). New ideas have to be created and, on top of this, put together in a coherent system that would look realistic. When thinking them up, authors would undoubtedly lean on their own life experiences, environment and cultural upbringing. For many of them, the best vision of a progressive society not corrupted by consumerism or greed would be inspired by communities in the countryside, or perhaps by stereotypes of preindustrial self-sufficient settlements. Many utopias share these elements of ‘environmental wisdom’ or even a pre-technological biblical paradise, for example, in Ernest Callenbach’s Ecotopia, citizens aim for a balance between themselves and nature. Callenbach himself said of his book, in relation to Americans: ‘It is so hard to imagine anything fundamentally different from what we have now… [But] we’d better get ready. We need to know where we’d like to go.’

There are a couple of authors – two brothers – who borrowed their ideas from a different cultural environment: that of the post-war Soviet Union, and about how their utopian world came out different as a result.

The Strugatsky brothers, Boris and Arkady, wrote their books collaboratively. They needed to pass Soviet censorship in order to get published, so they came up with an ‘approved’ setting for many of their books, called ‘Noon Universe’, in which communism has triumphed globally. Of course, they both loathed the constraints of state capitalism and totalitarianism on the lives of Soviet people, so their utopias went much further, painting a world free of money or coercion – a world where they would themselves want to live and work. Most of those books were written in the 60s and 70s, but to this day a more compelling, believable fictional world of the future where people are happy and lead dynamic lives has yet to be written – at least in the Russian science-fiction literature.

The Noon Universe, named after Noon: 22nd Century, chronologically the first novel from the series, also features in the following books: Hard to Be a God, The Inhabited Island, Space Mowgli, Beetle in the Anthill, and The Time Wanderers, among others. To give you an idea of some features of the future social organisation Arkady and Boris Strugatsky presented in their Noon Universe, without giving away any spoilers, here is a brief overview:

This fairly common set of features then goes on, now with a somewhat different focus:

Finally, what makes this world both believable and appealing, is this combination of on the one hand a democratic and science-based social system without exploitation, and on the other, individuals raised to support such socialist society:

Unfortunately, apart from The Gulag Archipelago, the legacy of Soviet literature is largely unknown in the Western cultural sphere, and the Noon Universe with its bright and highly optimistic vision of the future has not been popularised through films or comic books. I have tried to search for similar utopian universes in English or American books, or shown in films, but, as described in the beginning, found mostly dystopian sci-fi or stories of societies that went backwards ‘to the cradle of nature’ in their attempts to invent a fairer and wiser world. Perhaps the closest to the creation of the Strugatsky brothers comes the Earth in Star Trek: The Original Series, and even that is rife with militaristic and patriarchal themes.

From the vantage point of the 21st century, there are several issues that could also be improved in the Noon Universe, of course. For example, we might want to introduce some features of Marxist feminism and gender equality, and environmental considerations could have been described more convincingly. But the main features seem to all be there: technological progress comes hand in hand with societal progress, which is in turn driven by personal betterment of every member of that society. It might seem utopian, but I think it is fully socialist in spirit, more coherent and credible, and it really makes me want to step into that world and start living there right now.

(Talk given at the Socialist Party Summer School last month.)

4 Replies to “Sci-Fi, Utopias and Socialism”