Ten years ago, anyone who spoke of the ‘balance of nature,’ or claimed that our food was being poisoned on a mass scale, would have been classed along with nudists, vegetarians and socialists. Such talk identified the crank and the weirdo. As for ecology, few could even spell it.

Now we have Doomwatch, the biologist’s Dixon of Dock Green. We have advertisements based on ecological appeal, like the one for Natural Gas. Establishment magazines like Time and Reader’s Digest incessantly remind us of the threats to our natural environment. (…)

Why does pollution occur? A small amount is due to ignorance or miscalculation. A small amount is unavoidable given present technology and population. But the immense majority is due to the economic network. People pollute because it is in their economic interests to do so. 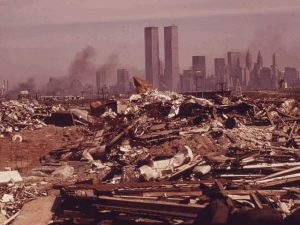 It is sometimes claimed, though, that the problem arises from a wrong attitude to nature. This has some truth, though it will not do as a complete explanation. The attitude to nature, and the economic system, are interlinked. The present growth of ecological awareness is full of hope, for it encourages a mentality which considers total processes rather than isolated fragments. The vast majority of specialised scientists did nothing to warn us of the menace to our environment, and when people like Rachel Carson raised the alarm, many of the ‘experts’ were more horrified at this usurping of their oracular role than at the gravity of the crisis. In the pesticide controversy, as in the earlier fallout controversy. The authorities were wrong and the ‘faddists’ were right. You cannot trust the powers that be.