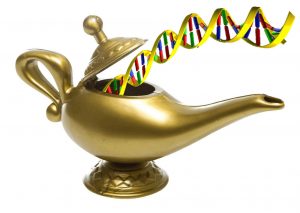 Gene genies
Revolutionaries tend to like science, and science loves revolutions. There’s one going on right now in something called proteomics. This studies the structures of proteins, collectively the proteome, which unlike the genome differs from cell to cell. The gist is that DNA makes RNA, and RNA makes proteins, but what do proteins make? That depends on the cell they’re in and the 3-dimensional shape they fold into. The hows and whys of this have up to now never been fathomed. But late last year Google’s DeepMind AI lab was able to predict the 3-dimensional folding of a protein (BBC Online, 30 November – bbc.in/2XKu5rR).

If this doesn’t sound very awe-inspiring, imagine you’re a kid with a basic Lego set, and one day your mum gives you a tool to design and create any individual piece you like, for any purpose, in any quantity. The potential limits go well beyond the sky.

But that’s building new things. What about debugging what already exists? Another revolution generating huge excitement involves the ability to cut and edit individual strips of DNA. Work is progressing so fast that textbooks, even if they existed, would be out of date as soon as they were printed. And as is so often the case, this breakthrough happened largely by accident.

Life exists in three domains (four if you include viruses): bacteria, archaea (a kind of alt-bacteria), and eukaryota (plants, fungi, slime moulds, us). Eukaryotes have fancy enhancements like a cell nucleus, but the other domains are much more rudimentary. Yet a few years ago it was discovered that the genomes of many bacteria (read also archaea) had strange repeating sequences in their DNA which nobody could account for. Fast forward to the revelation that these sequences were bits of virus DNA left over from attacks by bacteriophages, viruses that ‘eat’ bacteria. It turned out that the bacterium was able to use these DNA sequences as templates to peel off an RNA replica strand, a bit like an identikit portrait, that could be sent off round the cell to hunt for any matching DNA from other phage attackers, and bind itself onto it. Then came the killer surprise. The RNA strand came with a special weapon, a protein called Cas9, that was able to cut through the phage’s DNA at the binding point, thus dismantling the phage. In other words, bacteria and archaea had a hitherto unsuspected search-and-destroy immune system.

Imagine the squid-like blob attached to the astronaut’s face in the film Alien, all set to inject its loathsome babies into his innards to eat him from the inside out. But the quick-thinking astronaut pulls out a pair of scissors, aims it at the exact spot, and snips the squid-blob’s brain stem. The squid-blob drops off his face, stone dead. Bacteria do this to phages using these repeating identifier sequences. To describe these sequences, someone came up with the wonderfully recondite name of ‘clustered regularly interspaced short palindromic repeats’, or CRISPR for short.

So far so obscure, but then it was realised that if you could tweak these sequences, you could use the process to quickly cut, or cut out, any bit of DNA, at any point you like. If a single faulty base-pair is known to cause serious conditions, such as sickle-cell anaemia, it should be a simple matter to edit it out. Because genes are passed on to descendants, the edit would be permanent. Other life-crippling conditions and diseases could follow, such as cystic fibrosis or Huntingdon’s Disease. Edit the genome of the carrier mosquito and you could in theory wipe out malaria and dengue fever.

CRISPR-Cas9 gene editing has been described as one of the biggest discoveries in the history of biology, potentially allowing us to control and rewrite evolution. The two leading researchers in this field, Jennifer Doudna and Emmanuelle Charpentier, just recently shared the 2020 Nobel prize for chemistry, incidentally the first science Nobel ever awarded to two women.

But what to do with a frontier technology like this, that’s the big question, and it quickly becomes a political one. Professor Doudna is upbeat about the potential, especially for agriculture. But with capitalism, priorities are money driven, a trait discernible where the process has already been used – to create low-fat pigs, extra-woolly Cashmere goats, and gluten-free wheat, this last probably not for the few genuine Coeliac sufferers but more likely for the huge narcissistic food-fad market. Slightly alarmingly the professor also talks about creating mythological creatures like flying lizards and even unicorns (bit.ly/3oSvNTF). But, like many others including Professor Charpentier, she is quite aware of the Frankenstein potential, and an intense ethical debate is in full swing.

Genes can have multiple effects on other genes, and so on in cascading effects, most barely if at all understood. What if an edit causes an unexpected change, and the change ‘gets out’ and can’t be stopped? Home CRISPR kits are already starting to appear on the market, raising the spectre of some enthusiastic schoolkid accidentally creating a terminator gene that escapes into the wild.

Socialist society would also have to weigh up such risks. But capitalism raises the threat level far higher than it needs to be. Its entrenched class-divided nature could lead to this technology being hijacked by the rich in order to create designer babies and widen the class divide at the genetic level, a Brave New World scenario. Moratoriums on human genome editing do exist, and a Chinese scientist was jailed for three years in 2019 for carrying out illegal work on twins (bit.ly/3bH6Oz7). Yet the money and the temptation are there, and covert work is probably continuing in other dark corners. The gene genie is out of the bottle.

Then there is capitalism’s compulsion to weaponise new technology. A genetic ‘bullet’ wouldn’t just disable a soldier, it would disable all that soldier’s descendants. Fortunately perhaps, work is already underway on how to limit the effects of CRISPR or even stop it in its tracks. Viruses, currently the world’s Public Enemy Number One, offer a solution. It transpires that, in the microbial arms race, many viruses have evolved a powerful anti-CRISPR mechanism, which we could exploit (New Scientist, 13 January – bit.ly/3bMq8Lw).

It’s an indictment of capitalism that we even need to worry about weaponisation, or misuse by bad actors for commercial gain. No matter what technological benefits capitalism has fostered, fundamentally it doesn’t care about our welfare, only about money. Nobody in their right mind would trust a friend like that. We shouldn’t trust a social system like that either.

While science remains trapped in the service and thrall of capital, its revolutions will always be suspect, its achievements monetised and perverted, and its intentions derailed. The revolution needed to emancipate science for our collective benefit is never going to come out of a science lab. It has to come from the rest of us.
PJS