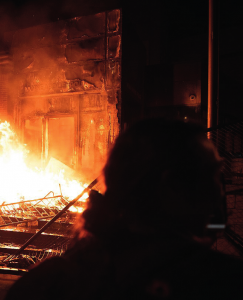 summer of 1967’, in which rampant unemployment, poverty, and police brutality in black America reached a boiling point, sparking almost 160 race riots across the country. Ironically, that same summer was referred to as the ‘Summer of Love’ by hippies due to their rapid concentration in San Francisco. Miami’s Police Chief, Walter Headley, held a press conference regarding a spike in violent crime in the city’s ‘Negro district’ that past holiday weekend. Miami narrowly avoided race riots that summer, with Headley saying ‘We haven’t had any serious problems with civil uprising and looting because I’ve let the word filter down that when the looting starts, the shooting starts’ (snopes.com/fsact-check/trump-wallace-looting-quote). We’ll leave aside the fact that this statement contrasted with a recent comment from Sheriff Purdy, saying that his department’s community relations programs and specialized training projects successfully prevented the civil disorders. This statement encouraging police to murder irreplaceable citizens for looting replaceable commodities – valuing commodities over human life – was predictably criticized by several civil rights leaders.

As Karl Marx once said, history repeats itself ‘…the first time as tragedy, the second time as farce’. More than 50 years later, the president of the United States, Donald Trump, made the same statement regarding looting in various cities across the country due to George Floyd’s recent murder (bit.ly/3debedI). After liberals had yet another field day of moral grandstanding, he tweeted to clarify his statement the next morning, but this was just an attempt to save face.

George Floyd was a former athlete, rapper, Christian, and proud father. Originally from Houston, Texas, he moved to Minneapolis, Minnesota around 2014 for a fresh start after serving four years in prison. Floyd was looking for another job after recently being laid off due to the pandemic, just like millions of other Americans. Shortly before his death, he’d purchased items at a local corner store with what the clerk believed was a counterfeit bill, which made them call the police. The police arrived, and the situation escalated to another unarmed black man being strangled in broad daylight as they repeatedly said, ‘I can’t breathe!’

This incident resembles far too many to name. Fatal police shootings have been rising every year, and the victims are disproportionately black. An estimated that 76.5 percent of Americans were white, and 13.4 percent were black in 2019, but victims of fatal police shootings were 36.85 percent white and 23.4 percent black that same year (the rest being unknown or Hispanic – bit.ly/2zMHWWc). What’s worse, roughly 1,000 people are killed by the police every year, but only 98 officers were arrested and only 35 convicted for it from 2005 – 2019.

Outrage over these incidents happening so often without officers being held accountable understandably led to widespread protests. There are countless videos of protests happening peacefully until police officers with more gear than Robocop assaulted citizens first, agitating them and leading to riots. It’s hard not to question the government’s priorities when they’re more prepared to attack its citizens for condemning murder than to protect them against a pandemic – whether the equipment was a free military surplus or not. You’re forced to wonder why using tear gas against foreign armies is an international war crime, but somehow not illegal to use against American citizens – or why rubber bullets are being shot directly at them when they were initially intended to be bounced off the ground.

Trump unsurprisingly condemned the riots, but not the police brutality that sparked them, nor did he call for any of the officers who’ve committed recent murders to be convicted. He says it’s due to the looting, but he couldn’t care less about corporations looting the ‘Not-So-Democratic’ Republic of the Congo. He hasn’t called for any of their CEOs or members of their Boards of Directors to be shot, just domestic workers looting products made by other workers abroad. What’s more concerning is that he’s decided to blame most of the looting on ‘Antifa’ and called for them to be designated as a terrorist group.

We’ll set aside all the terrorist groups backed by the United States and pretend that matters to Trump. What’s important, for one, is that we currently only have laws that allow us to designate international extremist groups as terrorist organizations, so an entirely new law would need to pass to classify domestic extremist groups as terrorist organizations. (en.wikipedia.org/wiki/United_States_and_state-sponsored_terroris). )The question would then be why that kind of legislation hasn’t been passed yet to designate at least the KKK as a terrorist group after all the murders they’ve committed – but it’s pretty clear once you realize that Trump’s dad was arrested at a KKK rally, although neither his exact charges nor the exact circumstances could be confirmed (bit.ly/3hC47PP). For two, and we’d argue most importantly, Antifa isn’t even a cohesive organization. Unfortunately, that could work in his favor. He probably knows this, but it could be incompetence at best or an excuse to charge dissenters as terrorists at worst.

Often people throw around the term ‘fascist’ too loosely and this waters down fascism’s actual meaning. Some might concede that Trump could be considered something of a ‘fascist-lite’. However, blaming a loose organization for the looters and calling for police to shoot them admittedly seems like he’s creeping into that sort of territory – especially once you consider the implications of the ‘EARN IT Bill’ (bit.ly/3dafwmE) and jokes he’s made about staying President for life.

The real question here is what we should do about this? In some ways protesting, signing petitions, posting on social media, etc. are all great activities to bring awareness to the issue. But we’ve done that countless times and know it’ll take much more than that to bring about any fundamental change. Attempts to hold law enforcement accountable have failed many times before, with two recent examples being a bill watered down in California and another blocked altogether in Utah. As Martin Luther King once said ‘…a riot is the language of the unheard’. Until justice is served, riots are guaranteed to continue happening. But the question is, can systemic racism and police brutality be prevented within our current system?

A fundamental change would require this system to work in the interest of the majority in the first place, which it doesn’t. It works in the interest of the capitalists. And we don’t mean your bootlicker, wage-slave Facebook friend that only comments on your statuses to defend Jeff Bezos. We mean the actual capitalists, the ones with mansions the size of Vatican City that still lobby to keep their taxes lower than anybody else’s. We’ve seen time and time again that, when it comes down to it, the state and the police won’t protect and serve the people; they’ll protect and serve the rich and their property. Police will hesitate to arrest their colleagues for murdering unarmed civilians, but if anyone peacefully protests in response? They’ll tear gas pregnant women in a heartbeat – knowing it’s been linked to miscarriages – arrest legal observers just for being there, then shoot people who riot or loot because of it. Police and the state only value your life if you’re part of the ruling class.

Private property, being different than personal property, inherently leads to competing classes. In the words of Adam Smith, ‘Wherever there is great property there is great inequality. For one very rich man there must be at least five hundred poor, and the affluence of the few supposes the indigence of the many’. Capitalism perpetuates systemic racism so well because it’s much easier to justify this inequality when those poor tend to be a particular race. It makes them easy to dehumanize, whether consciously or unconsciously. This perpetuation couples with the fact that private property requires a means to legitimize and protect it. In the quote mentioned above, Adam Smith also says, ‘The acquisition of valuable and extensive property, therefore, necessarily requires the establishment of civil government. Where there is no property, or at least none that exceeds the value of two or three days’ labour, civil government is not so necessary’.

That doesn’t mean it necessarily has to be democratic. Dictatorships have still been capitalist; all it needs is a monopoly of force. Even in an anarcho-capitalist dystopia where a traditional state wouldn’t exist, there’d still need to be private security forces. But once we understand that capitalism necessitates inequality and a defensive body and how that perpetuates racism, then we see why systemic racism would be a rampant problem and why trying to end it without ending capitalism is futile. 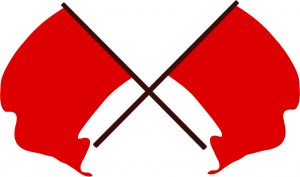 As long as we have private property, we’ll have trigger-happy, racist police hired to protect it at the expense of human life. I’m not saying never to speak out and protest against systemic racism, but to do that without keeping abolition of capitalism as the primary goal would be like hacking at a tree’s branches, rather than its trunk. To end police brutality and systemic racism for good, we need to establish socialism: an economic system based on common ownership of the means of production and production for use. Classes, class antagonisms, and systemic racism would thus be done away with once and for all.

JORDAN LEVI (World Socialist Party of the US)