Such a thing as society?

Margaret Thatcher once famously said that there is no such thing as society, just individuals and families. It sounds like obvious nonsense, but she claimed that this remark was usually quoted out of context:

‘My meaning, clear at the time but subsequently distorted beyond recognition, was that society was not an abstraction, separate from the men and women who composed it, but a living structure of individuals, families, neighbours and voluntary associations.’

This in effect negates her original statement, and she still seemed to forget the existence of companies, armed forces, the police and so on (though maybe she regarded those as ‘voluntary associations’). And Boris Johnson, while self-isolating in Downing Street, recently accepted that the contributions of NHS and other workers meant that the coronavirus crisis had shown ‘there really is such a thing as society’.

However, there are reasons for questioning the existence of society, not in general but specifically under capitalism. The historian Thomas Carlyle, for instance, wrote in 1843:

‘We call it a Society … Our life is not a mutual helpfulness: but rather, cloaked under due laws-of-war, named ‘fair competition’ and so forth, it is a mutual hostility’ (Quoted in E.P.Thompson: William Morris).

William Morris was himself influenced by Carlyle, and more than once he returned to this idea that there was no such thing as society. In ‘True and False Society’ (from 1886) he set out three criteria for a ‘successful society’: that work be arranged so that each capable person should do a fair share of it and no more; that everyone who did a fair share of work should enjoy a due share of wealth; and that waste of labour should be avoided. None of those, he argued, could be satisfied by capitalism, ‘our present so called society’. Socialism, instead, would be  ‘that true society which means well-being and well-doing for one and all.’

He made a similar point in the Statement of Principles of the Hammersmith Socialist Society, written in 1890 after he and others had left the Socialist League. For workers, capitalism, ‘has ceased to be a society, and has become a tyranny’. In its place, ‘it is not the dissolution of society for which we strive, but its reintegration’ and ‘it is a true society which we desire’.

If, as dictionaries generally do, we define society as a group of people living together, then, vague though this is, capitalist society certainly exists. Yet Carlyle and Morris definitely had a point, that a society based on division into classes and antagonism of interests between them is not a true community, where people work together for the common good. In connection with our aim, a system of society based on common ownership, our pamphlet Socialist Principles Explained states: ‘A system of society alludes to the sum total of human relationships and is meant to distinguish us from those who seek to organise cooperative colonies, islands within a sea of capitalism.’

So yes, there is such a thing as society, but capitalism is not a genuine community or, in Morris’s words, a true society, where people co-operate for the good of all. 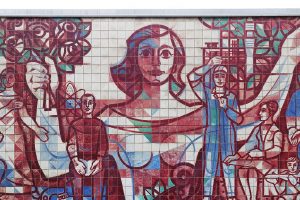