It seems hardly possible to many of us, confined indoors with no prospect of an exit strategy, that the world could have changed so much in a few short weeks. Things that seemed important a month ago are irrelevant now. Normal politics doesn’t matter. Nobody could care less about Brexit. Now the only topic of conversation is the coronavirus.

Panic-buying has been fuelled by panic-reporting. Even the normally sober BBC, or at least some over-caffeinated junior staff writer, temporarily succumbed to manic hyperbole by claiming that this was the greatest health threat in history (BBC Online, 20 March, since removed). Of course it wasn’t, as anyone who’s heard of smallpox or bubonic plague knows very well, and anyway the Beeb were misquoting the UK chief nurse, who had said it was the health service’s biggest threat in its history.

Panic has been evident among governments, who have not known how to react. Worryingly, experts have been praising totalitarian China’s ability to track air and rail passengers since 2000, including where they sat and who was in the nearby seats. When asked which countries had coped best, the WHO’s assistant DG included China and also Singapore, another poster boy for authoritarian uber-surveillance (New Scientist, 21 March).

The panic wasn’t helped by inconsistency over numbers. The estimated worst-case mortality figure of 400,000 for the UK failed to take into account the average 600,000 annual deaths, mostly from age-related conditions, meaning that estimated fatalities were being reckoned twice over. This was confusing, because the annual estimate of 8,000 deaths from seasonal flu is always cited in addition to and not as part of the normal 600k death rate (bbc.co.uk/news/health-51979654). Thus it was made to seem as if virus mortality rates could be up to 50 times normal background influenza rates, which was utterly misleading. 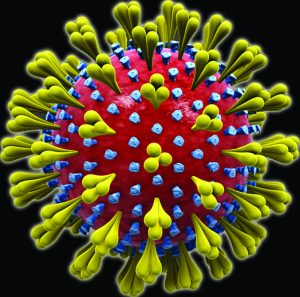 At least it’s only a coronavirus and not something worse, like bubonic plague. That’s not as unlikely as it sounds. Capitalism has through largely unnecessary and stupid reasons created a global antibiotic crisis which it is doing nothing serious about, so the Black Death, or some other forgotten pathogen, may one day ride triumphantly out of the history books to stalk the world again like the horsemen of the apocalypse in a Hammer horror movie.

The temptation for jaded socialists will be to think this is all somehow capitalism’s fault, but that’s hardly realistic. A new virus could surface at any time in any society. The difference may be what that society then does about it. Capitalist governments are keen to avoid getting blamed for wasting ‘taxpayers’ money (in reality, ruling-class money) on preparations for disasters that might not materialise, and instead tend to cross their fingers and hope that those disasters won’t happen, or at least, won’t happen on their watch. A socialist society wouldn’t be in thrall to any ruling class holding any purse strings, and would collectively agree on the major threats and what to do about them ahead of time.

Capitalism tries to shave costs wherever and whenever it can, because costs impact on profits. So public health services tend to operate at maximum capacity, with no margin for error or emergency, on the risky assumption that nothing will go wrong. When inevitably it does go wrong, leaders distance themselves from blame by protesting that they are not fortune tellers. For socialism, a job is either worth doing properly or not at all, so it’s certainly not worth doing something badly. In obviously important spheres like healthcare it would be considered pointless to reduce resources and effort to unsustainable levels.

Capitalism’s ‘just-in-time’ distribution system saves money on storage, but collapses very quickly in the face of any large-scale social disruption. People know this, so their logical response at such times is to panic-buy, thus exacerbating the problem. Socialism, having no storage ‘costs’ as such, would use local storage in the same way as electrical capacitors, smoothing out peaks and troughs and making supply more robust and reliable. People would know this, and would see no need to overstock.

But what about a vaccine? This is a clever, insidious virus, with tricks that are hard to work around. The Ebola vaccine took 5 years, and that was only by breaking a lot of regulatory rules. Drug companies were urged to throw money at it, and they did, but the 2014 Ebola epidemic died out naturally before most of them could see a return on their investment. Because they lost money on Ebola, they have been very reluctant to put money into coronavirus research (bbc.co.uk/news/business-51454859). Just as with antibiotics, capitalism won’t put its coin in the slot if it doesn’t think there’s a jackpot, even if the entire world needs that vaccine desperately. Socialism would have no such hesitation.

And yet, credit where it’s due. In desperation, capitalism is suspending its own rules. Governments have put aside economic considerations in favour of something that looks almost like humane compassion. While global economies plunge into the abyss they are frantically recruiting factories to build ventilators, raiding the exchequer to ward off a social deprivation crisis, and belatedly pumping funds into vaccine research.

But it shouldn’t take a global pandemic before capitalism is prepared to work in the interests of the people in it. In fact this is capitalism trying NOT to behave like capitalism, trying temporarily to impersonate something quite different, quite alien to itself, a cooperative system where mutual well-being is the main concern and knowledge and resources are shared for the common good.

Capitalism only resorts to this under extreme duress. It is like a coach and horses trying to walk backwards. As Dr Johnson would say, we are not surprised that it is done badly, rather that it is done at all. Yet it can’t keep up the effort for long. The ruling class’s sociopathic drive for profit and perpetual growth will soon reassert itself.

The world would do far better to adopt a stable social model where cooperative and sharing behaviour is built in by design, and by whose steady operations such crises may be better managed, and even less likely to emerge in the first place. People have been under siege from capitalism for too long. Now it has shown it can take a temporary holiday from itself, humanity’s smartest move would be to make that holiday permanent.