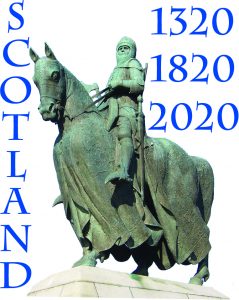 Tens of thousands of Scottish nationalists would have been parading through the streets of Arbroath this month in their kilts and tartan regalia, flourishing their Saltires and Lion Rampants flags, celebrating a 700–year old document. Far fewer will be commemorating another event which took place 500 years later, this April’s bicentennial of the Weavers Uprising (also known as the Radical War.)

One is a story of a letter to the Pope requesting his papal blessing for the privileges of Scottish nobles and their birthright to the subjugation of their tenants and peasants (the correct title of the Arbroath Declaration is “Letter of Barons of Scotland to Pope John XXII.)

The other story is one of the common-folk’s resistance to exploitation and a struggle against oppression.

For historians, the 1820 rising of the weavers was a minor insignificant event in the annals of Scottish history but then, of course, the Declaration of Arbroath was swiftly forgotten too, and only resurrected for a propaganda purpose very different from the mistaken belief held by today’s nationalists that it was declaring the independence of the Scottish people. In 1680 Sir George Mackenzie publicised it, not as an expression of nationalism but as support for those who wished to curtail royal power.

Historian Neil Davidson takes the key passage to be:

‘Yet if he [Robert the Bruce] shall give up what he has begun, seeking to make us or our kingdom subject to the king of England or to the English, we would strive at once to drive him out as our enemy and a subverter of his own rights and ours, and we would make some other man who was able to defend us our king; for, as long as a hundred of us remain alive, we will never on any conditions be subjected to the lordship of the English. For we fight not [for] glory, nor riches, nor honours, but for freedom alone, which no good man gives up without his life’.

Its message is first directed at the English king, Edward II, informing him that it was pointless for him to attempt to depose Robert the Bruce with a more subservient king, since the remainder of the Scottish aristocracy would not cease its resistance. Secondly, it is also aimed at Robert the Bruce’s dubious past record; they would not accept his jeopardising their interests

The idea that the Arbroath Declaration challenged the Divine Right of Kings with the notion that the nation itself was foremost and the monarch merely its steward, is presented solely to justify Bruce usurping the rightful king John Balliol. The section of the Declaration reading:

“if this prince [Bruce] shall leave these principles he hath so nobly pursued, and consent that we or our kingdom be subjected to the king or people of England, we will immediately endeavour to expel him, as our enemy and as the subverter both of his own and our rights, and we will make another king, who will defend our liberties.”

It should be read as a cautionary warning and a clear threat to Robert the Bruce himself.

Those medieval signatories to the 1320 Declaration were not leading any ‘liberation struggle’. In fact, John de Menteith, who turned William Wallace over to the English king, placed his seal upon the Declaration of Arbroath.

What did the the document actually mean? It was the ‘freedom’ of the Scottish barons that it was concerned with. The ‘people’ of Scotland were the nobles, the majority of whom at that time were still culturally Anglo-Norman, despite inter-marriage. None of the signatories held the view that the actual people of Scotland should have any say in any issue and they had no concept of popular sovereignty whatsoever

If true ‘freedom-fighters’ are required then Scottish workers should look not to the winners and losers of aristocratic medieval family feuds over the throne of Scotland, but to those brave if foolhardy weavers who rose up five hundred years later in April 1820.

The  ‘Battle’ of Bonnymuir  took place on the 5 April, 1820. Thirty-two cavalrymen routed twenty-five, poorly armed, striking weavers. John Baird and Andrew Hardie, who came to be known as the ‘Radical Martyrs’, were sentenced to be hanged and beheaded (along with James Wilson who was later part of a riot that broke prisoners free at Greenock.)

Glasgow was at this time just a collection of small village communities with weaving being the main occupation. The handloom weavers enjoyed skilled status and worked to commission. They could choose their own hours of work if they were willing to forgo some proportion of their earnings. Given that these workers had free time many were able to read and would talk about what they had read, discussing the American and French revolutions. A slump in the economy after the Napoleonic Wars when pay and conditions deteriorated drastically resulted in workers, particularly weavers in Scotland, seeking reforms from an uncaring gentry-controlled government already in fear of revolution.

The ‘Committee of Organisation for Forming a Provisional Government’ put up placards on Saturday 1 April, calling for an immediate national strike. Many in central Scotland came out in support the following week.

’Friends and Countrymen! Rouse from that state in which we have sunk for so many years, we are at length compelled from the extremity of our sufferings, and the contempt heaped upon our petitions for redress, to assert our rights at the hazard of our lives.’

And, it called for a rising:

’To show the world that we are not that lawless, sanguinary rabble which our oppressors would persuade the higher circles we are, but a brave and generous people determined to be free.’

One group of strikers decided that attack was the best form of defence. With the purpose of acquiring weapons, about twenty-five weavers, led by Andrew Hardie and John Baird, marched on the Carron Iron Works near Falkirk to capture weaponry which was manufactured there. Tragically for that group, due to earlier underground societies like the United Scotsmen, government spies were active which meant the march on Carron was already known. The Army was given its own marching orders and when the two forces met  the radicals began firing. After a few volleys, the cavalry flanked the rebels and the inevitable end was swift. And so ended the ‘Battle’ of Bonnymuir.

On the day of his execution, Hardie’s words were:

’Yes, my countrymen, in a few minutes our blood shall be shed on this scaffold… for no other sin but seeking the legitimate rights of our ill-used and downtrodden beloved countrymen.’

An irate Sheriff ordered him to stop ‘such violent and improper language’.

’What we said to our countrymen, we intended to say no matter whether you granted us liberty or not. So we are now both done.’

1820 can be seen as the emergence of peoples’ power later to manifest itself in the Chartist Movement. The rising should be seen in the context of ordinary people from all over a growing industrial Scotland being inspired to overthrow the government in order to secure their rights and better working conditions.

We shall let the reader judge which historic event deserves to be remembered and celebrated.