Wood For the Trees: The Art of Cynicism

Those who might be unaware of it can be confidently assured that we live in a ‘Golden Age of Rock Music’. The music of bands like: Disturbed, Ghost, Godsmack, Rammstein, Epica, Kamelot, Nightwish and Band Maid represent my evidence for this. The last two bands have released new singles that have rekindled the old debate between the cynical and the hopeful. Some see Nightwish’s Noise and Band Maid’s The Dragon Cries as merely profiting on the environmentalist zeitgeist whereas others hope that these tunes represent the political integrity of the respective bands and will help create political change. Obviously these videos and the music that they promote are extremely costly and can only be made within the capitalist context because they represent a commodity that will, for the investors, sell at a profit. However this fact, beloved of the cynics who choose to believe that nothing will ever change, does not exclude the possibility that the nature of that commodity might itself become subversive of the system which helped create it. Change, for good or ill, is inevitable and we can ask what role music and the arts play within our culture’s restless history.

Nightwish have a long track record of using their music to communicate a political perspective. It is only recently that this Finnish band, courtesy of the internet, has started reaching a global mass audience. They have become commercially powerful enough to only create the music that they want to make rather than bow to the commercial pressures incarnated by studio execs, producers and owners of record companies. The Japanese Band Maid, although very popular with the rock cognoscenti online have not reached a similar stage of commercial ‘independence’. Their single The Dragon Cries is their first overtly political song but because it was produced in the USA and is sung in English some suspect it of cynically exploiting the environmental and political concerns of its intended youthful listeners. What is beyond dispute is the quality of musicianship that produces the aesthetic catharsis so essential to great rock music (or any art form). Another possible avenue for a cynical critique is the appearance of the band. They wear doll-like house maid uniforms which emphasize the extreme feminine quality of many young Japanese women. Again whether this is purely a commercial decision to attract male audiences or whether it represents an intriguing antithesis to the macho posing and costumes of the traditional purveyors of heavy rock music is debatable. If we like a band we feel the need to defend it against criticism, whether justifiable or not, but is it necessary or important to do so?

Art, as with all concepts, is full of dialectical contradictions; it can serve the powerful or it can subvert their power. It can also, if it’s any good, contradict the intentions of the artist through the interpretation of its audience. Born in the USA by Bruce Springsteen became, famously, an anthem for patriots despite the composer’s opposite intentions. In his effort to communicate with a global audience Bob Marley, according to some, sold his soul to Island Records. Art seems quickly to become independent once it leaves its creators hands. We use the word zeitgeist to emphasise this phenomenon in an attempt to understand why some art becomes iconic whilst other art, despite being of equal aesthetic quality, drifts into historical obscurity. Of course without the artist, recording technology, capital investment, the internet etc. we wouldn’t have any art to discuss but although the motivation, inspiration and integrity of those concerned in its creation is intriguing it is not the most decisive factor in the political and historical fate of any work of art.

In America the music of Jimi Hendrix, Marvin Gaye, The Doors and Creedence Clearwater Revival all fed the anti-Vietnam War zeitgeist that helped to end the conflict. The music of James Brown, Gil Scott Heron, War, the Temptations and Harold Melvin all strengthened the Civil Rights movement in the US. Not that this represented the cause of any political improvement but it would be foolish to deny that it helped create a cultural background for change. Perhaps the reason that we see such a flourishing of rock music is because of another surge of political discontent? Another irony is that many of these bands no longer come from rock’s birthplace (the USA) and oppose its economic and cultural imperialism. The German band Rammstein have said that they will never use English in their lyrics for this reason. Ironically seventy years on from the end of the Second World War we see a young band from Germany’s old axis ally Japan having to make the decision of whether to confront (like Rammstein) the contemporary icon of capitalism and its destructive values or try to subvert it – that is if they do indeed possess the political integrity one might wish them to have. It has always been challenging to believe that those with extraordinary talent might have no moral integrity or political good will and would sell themselves to the highest bidder but, to misquote the lyrics of another great rock band, ‘we’ve all been fooled before’. 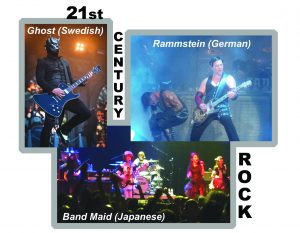