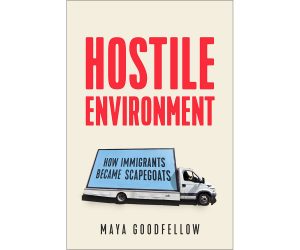 In a world full of euphemisms, the term ‘hostile environment’ really does describe the government’s policies towards migrants. The Immigration Acts of 2014 and 2016 made life much tougher for those who had migrated to the UK, threatening to deprive them of health care and housing or even deport them, if they could not provide the right documents. But, as Maya Goodfellow shows here, complemented by examples of the plight many migrants find themselves in, this is all just part of a much longer history of hostility towards immigrants.

Britain, she says, was made by migrants (see ourmigrationstory.org.uk). The first inhabitants came from southern Europe, and there were plenty of people of different origins here before the Anglo-Saxons arrived in the fifth century. Migration did not always result in prejudice and opposition, but this began to change, especially as many Jews arrived in the nineteenth century, fleeing pogroms in eastern Europe. The Aliens Act of 1905 was the first substantial piece of legislation dealing with immigration, and was aimed at restricting the number not just of Jews who came here but of the poor as well. Irish immigrants, too, were often regarded as inferior to ‘white Britons’.

The 1948 British Nationality Act made it easier for people from the ‘white Commonwealth’ to come to the UK, in contrast to those with black or brown skins. This was passed under a Labour government, and both Conservatives and Labour were responsible for much legislation that limited immigration and even made it harder for those born here to get citizenship. The regulations relating to migrants are complicated and frequently change; legal help to navigate your way through them is expensive and not always reliable. The Commonwealth Immigrants Act of 1968, says Goodfellow, was one of ‘the most reactionary immigration acts that has ever passed through Parliament’; it was brought forward by a Labour government.

A number of other good points are made, among them the following. There is no evidence that immigration has a negative impact on wages. A smaller percentage of migrants than of the general population claim benefits. Racism is not ‘a mistake or a consequence of demographic change; it is a product of history’. The tabloid press consistently peddle lies and exaggerations about migrants. People have inflated ideas about the proportion of migrants in the UK (it is about 13 per cent). If immigration is discussed in terms of numbers, there will always be ‘too much’.

Towards the end, Goodfellow refers to a world ‘without the borders or the immigration controls which give rich people the right to move but treat this same freedom as dangerous in the hands of the poor’; a world without global inequality or climate change. There is much of interest in these pages, but it is a pity that such ideas are not developed further. 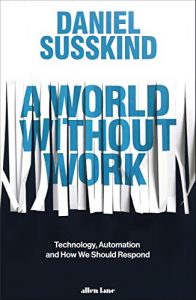 Daniel Susskind: A World Without Work. Technology, Automation and How We Should Respond. Allen Lane. 2020. 326pp.

Will there be enough work to go round? That is the fundamental question discussed in this book by Oxford University economist and former government policy adviser, Daniel Susskind. His main concern is whether the rapid spread of automated work, most of it based on the use of artificial intelligence (AI), will, in the near future, lead to ‘technological unemployment’ and if so how that future society can cope with this.

In a compellingly written and clearly argued narrative, his thesis is that, even if in the past, fears that new technology would lead to unemployment have proved unfounded, the nature of current and ongoing technology, especially AI and the robots it is creating, will indeed mean that the demand for human work will ‘wither away’. He argues convincingly and with many salient examples that the potential of AI is such that even the many tasks which are highly important for human society to operate efficiently involving feeling, empathy and judgement will, contrary to commonly expressed views, soon be able to be done by machines. Such machines, he insists, are already in use or in the process of being invented, even if they cannot ape human means of carrying out certain important tasks, are capable of achieving equally (or more) efficient outcomes than the same work done by the manual or brain power of human beings. And if no action is taken to handle this ‘task encroachment’ (the term he uses to describe this process) the resulting ‘technological employment’ is likely to bring increasing social instability.

So what action does he recommend? Certainly not efforts to prevent technology from taking over human jobs, He quite understandably sees that as an impossibility in a system where the criterion for choosing between human work or automation is which is more profitable and where the increasing trend is for the cost of automation based on AI to fall. Instead, accepting that in the future there will be far less work for people to be employed in, he recommends an increased role for the state. He argues that the state (the ‘Big State’ as he calls it) will have to intervene, to regulate and to effectively prop up the living standards of workers by what he calls a ‘conditional basic income’, a variation of the currently much discussed idea of a ‘universal basic income’.

How this could work leads the author on to some interesting discussion about the difference between work and employment. In particular, though not seeing beyond the need for the current organisation of work as paid employment, he also sees another dimension of work – as ‘a source of meaning, purpose and direction in life’. And this connects with the socialist case for a world of voluntary work and free access to all goods and services. The argument often made against this is that such a system could not work since, without the necessity to make money to buy goods and services, people would not work, would not co-operate to carry out the tasks to make society operate efficiently and things would simply fall apart.

However, even if Susskind’s own field of vision lies firmly entrenched in the current society of wages and salaries, buying and selling and the pursuit of profit, it is possible to draw succour for a different system from much of what he says. His final chapter, especially, entitled ‘Meaning and Purpose’, contains the notion implicit in the socialist idea of a moneyless, wageless society that it is not inevitable for human beings to see work merely as a means of keeping the wolf from the door (i.e. gaining income from employment) but that, over and above the current employment system, work is a basic human need, has a ‘social dimension’ and provides ‘a chance to gain status and social esteem’.

In this connection, as pointed out by the writer, even today, in a situation in which most people have difficulty in imagining how society could be organised differently from the way it is, in the UK 15 million people still volunteer regularly, already half as many as are in paid work, and are engaged in the kind of activity referred to by the author as ‘work in pursuit of purpose rather than productivity’. In this they achieve, as he puts it, ‘value through community recognition rather than through market wages’. Then, towards the end of his book, the author quotes with apparent approval the description of work in Marx’s Critique of the Gotha Programme as ‘not only a means of life but life’s prime want’.

So this is a book well worth reading not only for its knowledge of and insights into likely developments in the field of work within the capitalist system but also for its reflections on the nature and purpose of work generally. While the author does not imagine a society structured fundamentally differently from the current one, he clearly sees that work could, and should, be more than just the grind of employment that it is for so many and as helping to fulfil the basic human need for personal fulfilment and social interaction. 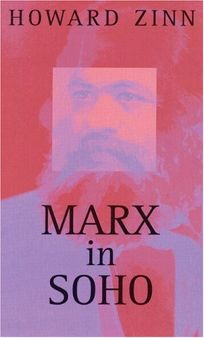 Witty, imaginative, to the point, with the ability to stir the emotions from frustration and anger to amusement, hilarity even, this was originally conceived as a traditional play which Zinn later reworked into this monologue. Zinn read Das Kapital (Volume I at least) before the age of twenty and was excited to recognize ‘certain core truths’ about the value of labour, surplus value and the division of the classes, i.e. labour was the source of all value; labour produced a value beyond its meagre wages; surplus value went into the pockets of the capitalist class.

The play was written at the time when the collapse of the Soviet Union brought on much gloating from the media and politicians because ‘ot only was “the enemy” gone, but the ideas of Marxism were discredited.’ Zinn wanted to show ‘that Marx’s critique of capitalism remains fundamentally true in our time.’ The opening of the play has Marx, having been granted an hour to return to Earth to defend his stance of a century and a half earlier, arriving in the wrong Soho – New York, not London – to point out the relevancy of his writing to today’s working population (the audience). Zinn states that the major events are historically accurate but that there is some literary licence regarding his meetings with Bakunin and the relationships within his own family (especially with Jenny and Eleanor) and although most of the dialogue is invented he uses Marx’s own words liberally.

This is a refreshingly different approach to bringing the fundamental ideas of Marx home, stressing, by using humour, just how relevant the principles of Das Kapital still are. ‘Did I not say 150 years ago that capitalism would enormously increase the wealth of society but that this wealth would be concentrated in fewer and fewer hands?—(reads from newspaper)—“Giant merger of Chemical Bank and Chase Manhattan Bank. 12,000 workers will lose jobs—Stocks rise.” And they say my ideas are dead.’

Commonly held confusions about communism and socialism are laid bare here with Marx becoming angrier as he looks back at Stalin’s legacy. He barks out ‘Socialism is not supposed to reproduce the stupidities of capitalism.’ Industry, war, national borders, prisons, the Paris Commune, education, all subjects are covered with relevant jibes at the situation since his time.

Marx’s anger builds as he remonstrates at the slowness of succeeding generations to accept and act on what he foretold but, realizing that he only has limited time to get his message across at this, his second coming, he mellows somewhat, reiterates the basic premises and leaves us with hope for the future – if we get off our arses!

This book is fun and will serve both to rekindle and enliven the tired socialist spirit and to encourage and further motivate active participation by armchair socialists.