Stacey Dooley has an open-minded, grounded approach to her documentaries, with an engagingly genuine interest in the contentious subjects she covers. Her latest programme, Stacey Dooley Investigates: The Whale Hunters (BBC3), follows on from her previous investigations into women suicide bombers and sex offenders, among other topics. Stepping out of her comfort zone, she goes out on a Norwegian boat hunting minke whales, and watches as one get harpooned and dragged aboard. Most of the programme, though, is taken up by her meeting families on the Faroe Islands, where eating long-finned pilot whale meat has been part of their culture for a thousand years. Hunting pilot whales is called the ‘grind’(grindadráp)in Faroese; when a podis sighted out at sea, fishing boats herd the whales towards the beach where they are killed by hand. The recommended method claims not to cause any suffering: a sleek-looking tool called a spinal lance, the use of which is monitored and regulated. 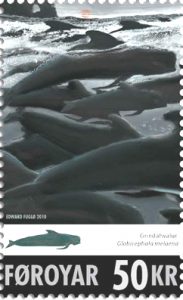 The Faroese live a rural life, close to nature and therefore not as distanced from where their food comes from as most of us. When we load our supermarket trolleys with meat or fruit or any food, we scarcely think about how it was produced. The Faroese see pilot whale hunting as ‘taking food from nature’, which it is their ‘duty’ to do. They emphasise that they don’t catch any endangered species and it’s more environmentally friendly than rearing cattle, which carries a significant ‘carbon footprint’. The grind is small-scale subsistence farming, with the meat just distributed among the islanders rather than being for export. Pilot whale meat remains popular among the Faroese, despite the islands’ officials recommending years ago that eating it should be avoided. This is because it contains high levels of mercury, DDT derivatives and polychlorinated biphenyls (chemicals largely banned in the 1970s), leached into the oceans and ingested by the pilot whales.

The Faroese see the grind as part of their culture, which others don’t have the right to interfere with. Whaling around the Faroe Islands isn’t covered by the International Whaling Commission’s ban on commercial whaling. For starters, the long-finned pilot whales hunted there are a kind of dolphin, despite their name. Also, as the Faroe Islands are devolved territories of Denmark, as Greenland is, their autonomy means that they don’t go along with Denmark as one of the countries which agreed to the ban. ‘Aboriginal whaling’, defined as the hunting of whales by indigenous communities is exempted from the ruling anyway. Japan always got round the ban by hunting whales for ‘scientific’ reasons, while Norway, Canada and others object to the moratorium and have continued commercial hunting. The hunting of whales was banned because many species were declining rapidly towards unsustainable levels. Another factor is that whales and dolphins are more intelligent than most other mammals, raising questions about their capacity for suffering and awareness.

Objections to the grind mostly come from the Sea Shepherds, a direct-action group, whose mission ‘is to end the destruction of habitat and slaughter of wildlife in the world’s oceans’. They used to actively protest against the grind, but since being banned from this their work has shifted largely to raising awareness by posting grisly videos of the hunt online. The group of them which Stacey meets are made up of activists from the UK and America, while none are Faroese. The Sea Shepherds emphasise their non-aggressive methods, and argue that the grind is a tradition which should be left in the past, and that it’s not as humane as its proponents make out. They point out that the spinal lance often isn’t used correctly, causing suffering to the pilot whales. Stacey shows an adviser to the Faroese government gory footage of a dolphin being killed in a clumsy, drawn-out way. Official reports claim that the methods used are humane and quick, whereas a fifth of whales take up to six minutes to die. The adviser recognises that sometimes the grind can be brutal, but that’s because it takes place in an uncontrolled environment, not in a slaughterhouse.

Objections to the grind and the risk of contamination haven’t stemmed the Faroe Islanders’ love of pilot whale meat. The grind, and whaling in general, have been traditions for hundreds of years, and could continue for hundreds more. How would the issue of whaling be handled in a socialist society? Of course, we can’t say with any certainty, as it’ll depend on whatever the situation is at the time. But the practice is still likely to divide opinion and represent bigger questions about cultural differences, animal ‘rights’ and sustainability. A socialist society would make its decisions democratically, rather than through hierarchies, commercial interests or laws, as we have to in capitalism. All sides would be able to have their say, and all relevant facts – about contaminants, whale populations, the methods used – would be freely available so that people can make an informed decision. This could be made by voting directly on whether or how to hunt whales, or by electing people into roles to resolve the issue, or some other approach we can’t imagine now. Would it be only for the whaling communities to decide? Maybe, maybe not, if hunting had a wider impact. It’s likely that a socialist society would have some decision-making structures with a global reach, more accountable and accessible than their equivalents today and not run through states (as states would be obsolete). So, it’s possible that something like the International Whaling Commission could remain in a socialist society, albeit structured differently and more democratically. Whichever way any decisions about whaling would be made in socialism, they would aim to directly meet people’s needs and wants, in balance with nature. There are no easy answers with controversial issues like whaling, but a socialist society would enable us to make decisions in the most reasonable way.