50 Years Ago: The mad world of capitalism

Once again bricks are piling up, brick-workers are being laid off and brickworks closing down. All because the manufacturers can no longer find a profitable market. There are about 1,800,000 houses in England and Wales officially classified as “unfit”. But the fact that millions of people need better homes does not affect brick production for the simple reason that it is not profitable to produce bricks to build houses for people who would not be able to pay for them.

Meanwhile, in France the government are worried about there being “too much food”. According to the Times (23 January 1970), the solution advocated by one group of academics and civil servants is that one-third of the present cultivated area of France should be taken out of food production. The Vedel Commission recommended:

‘Whatever rate of modernisation is adopted, agriculture will continue to build up surpluses if it continues to exploit the same area as today. Whatever happens, the excess land that will have to be withdrawn will be at least 10m. hectares.’

To do this would be in line with what other governments, notably the American, have already done in a bid to prevent the production of food that cannot be sold profitably. It is not that people do not need the food—the Food and Agriculture Organisation estimate that up to half the world’s population go to bed hungry—but that because they cannot pay for it there is no profit in growing food for them. 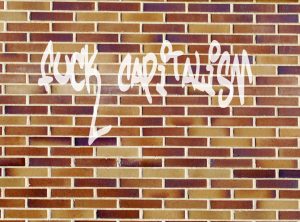 Stockpiles of bricks beside slums; proposals to cut back food production in a hungry world—just two more examples of how capitalism cannot serve human needs.