Why we don’t buy religion

We publish below a letter from a subscriber which we publish here together with our reply.

As both a Christian and a subscriber, and avid reader, of the Socialist Standard, I am always interested when you include an article about religion. Alas, I am usually disappointed by the content – whereas the majority of your articles are well thought out and intellectually stimulating, religious reference is invariably clichéd and simplistic. Your ‘Rear View’ column (January) was a prime example. I think one of the problems is that atheists in general tend to have a rather simplistic view of what scholars mean by the word ‘God’, and they assume that what they are rejecting is what theists are accepting. (The supernatural, heaven, hell, miracles, virgin births etc., etc.) If I may, briefly, put my own views, it may enlighten fellow readers.

I attend church because throughout my life I have had a sense that there is more to the physical world than ‘meets the eye’. Theologians give this otherness expressions like ‘the beyond in our midst.’ Or, as Paul the apostle suggested, ‘..that in which we live, move, and have our being’. Some call this otherness God, or Spirit, The Tao, life force. No, not a big man in the sky. Simply something underlying.

I personally have no great views about heaven or hell, what happens (if anything) when I die. In, fact, I am agnostic about many things theistic. I occasionally pray, but whether I am talking to myself or not, I have no idea. But yes, I am spiritual – I have a sense of wonder, awe, fascination with the world, beauty, love. I question meaning and purpose. I have a sense of connectedness with something deeper. Purely psychological? Meta-physical? Who knows. I like church because I have a sense of mystery about this whole, strange state, of being human, and I like being with like minded people. I know enough about quantum physics to know that the physical world is far weirder than normal ‘reality’ suggests. I know enough about the debate on consciousness to know that the majority of scientists would say that the relationship between thought and matter remains as much a mystery as ever. And I am aware of the fact that whether light is observed as wave or mass appears, oddly, to depend to some extent on the observer. Bizarre indeed! None of this, of course, proves there is an underlying non-material entity to creation any more than it disproves it. But the whole thing really is too odd to suggest, as Rear View does, that everything can be ‘adequately explained…!’ A bold and rather premature statement indeed!

My other point in writing is that I am interested in how you see a truly socialist world treating ‘religious’ people. There is no point in saying that, because everything would be so wonderful, people would have no recourse to ‘pie in the sky’ and gods. That would simply be regurgitating the old clichés. There will, I suspect, always be people, like me, who are more ‘spiritual’ than others, as there will always be people who are artists, musicians or sportspeople. But, just as an artist is unlikely to stop painting because they are told that a photograph gives a much truer sense of reality than oil on canvas, so why bother, a spiritual person won’t necessarily stop being ‘spiritual’ because the state says, ‘but can’t you see what science can do..’

My question is, would people who want to meet together to meditate, ponder, ‘pray’, be forbidden, even persecuted (as in many places already.)? Would socialism want to wipe ‘religion’ off the face of the earth just because their ideology does not agree with it? Would the majority dictate what one is allowed to think (as ‘political correctness’ already does)? Worrying.

Should you print or reply to my letter in any form, I hope that you will refrain from the usual list of historic 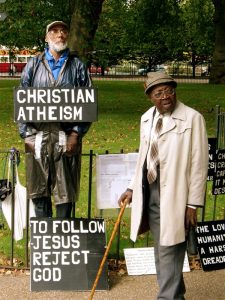 (and present day) religious horror stories to make your point. Yes, we all know about the crusades, the Reformation, modern day ISIS, child abuse etc etc. Yes, we all know that organised religion is part of the establishment and the Churches have vast wealth and why should bishops have a say in parliament. And yes, I know the God of the Old Testament is hardly a role model for love and forgiveness. Socialists get very annoyed (quite rightly) when the media rubbishes socialism largely because they don’t understand that there has never been a true socialist state. In the same way, Christians would say that the horrors perpetuated in the ‘Christian’ name have never been truly Christian, and that the Christian vision of ‘the Kingdom of God’ (love, peace, goodwill, equality, brotherhood etc.,) have likewise never been achieved. We have that in common; socialists and Christians are both mocked and ridiculed in today’s Britain. Let’s at least try to understand each other.

I will just finish by saying that I have written this from a Christian perspective. I am sure disciples of other faiths could say similar things. Finally, I think your journal is an excellent read. Capitalism and its feed consumerism is no way to run the world. There must be a better way.

We certainly agree that the universe is stranger and weirder and more mysterious than we currently understand, or possibly will ever understand. But you have misinterpreted our statement that ‘the origin and development of the universe, of life, of society and religion itself can be explained adequately’ because you missed out the remainder of the sentence ‘… without recourse to the so-called supernatural’. Obviously we don’t mean that everything has already been explained, only that when it comes to gods ‘we have no need of that hypothesis’.

We’re glad you like reading the Socialist Standard, but bemused that you think you might be persecuted for your beliefs in a socialist society. In general the only people who persecute religious people are other religious people. Scandinavian countries are the most secular in the world, and they are not famous for their religious persecution. We take the practical view that everyone is free to believe what they like in socialism, as long as it hurts nobody else. We don’t think it’s a cliché to suggest, like Marx, that religion is an opiate that only oppressed people need, which is why we imagine it would fade away through neglect and without any help from us.

But you posit a special case, the uniquely ‘spiritual’ person whose existence implies that religion will always exist. This is an abiding fascination among many religious people, the idea of a ‘spirit’ which they think they possess but which is partially or wholly lacking in atheists. What they really mean is that atheism is a form of disability, something less than fully human. We get this a lot, as atheists (factually we prefer the term ‘materialists’), and it is quite wearing. To us it sounds rather like what white supremacists think of black people, or patriarchal males think of women, or entitled rich people think of the ‘lower orders’. These world views love to fence themselves in with a narcissistic and self-congratulatory belief in their own superiority. Belittling others makes them feel all warm and cuddly. When religious people tell us how deeply ‘spiritual’ they are, it comes off as passive aggression.

Any ‘atheist’ will tell you that the ability to feel profound wonder and joy at the beauty and majesty of existence is not at all a religious faculty, it is a human faculty shared by all of us. We don’t stop appreciating the grandeur of a sunrise just because we understand something about how nuclear fusion works.

In the interests of trying to understand each other, we ought to try and explain why we are an ‘atheist’ organisation. Partly it’s because, as you know, many religions like to impose a deferential mindset that is all about maintaining the status quo. But there are all sorts of new-wave religions, supernatural belief systems and random superstitions which don’t fit this conventional hierarchical model.

A more crucial argument is the nature of the socialist project. Capitalism is a universal human problem but it exists in a world fragmented into cultural, moral, linguistic, geographical and psychological tribalisms. A universal problem requires a universal solution, and a universal solution must be conveyed in a universal language. The only universal language we know is science, and the method of science. So we base our socialist case on the scientific method, on evidence-based reasoning. Religion – of whatever sort – is a matter of personal faith and so has nothing to say to science, nor to any pursuit which aims to follow the scientific method. You may certainly argue that religious people like yourself could be socialists despite this, but it is our experience that religious people on the whole seem more concerned with their personal faith than with class politics, which is perhaps why we have never heard of any large-scale religious socialist movement – Editors.